A recent report by World Resources Institute has ranked Nepal among the top 40 water-stressed countries in the world.

Water scarcity is not a new problem for Sushil Shrestha and his family. Every year, he scrambles to meet water needs for his family of five. Two months back, frustrated with regular water shortage, Shrestha was among hundreds of others who took to the streets, demanding water from the government. 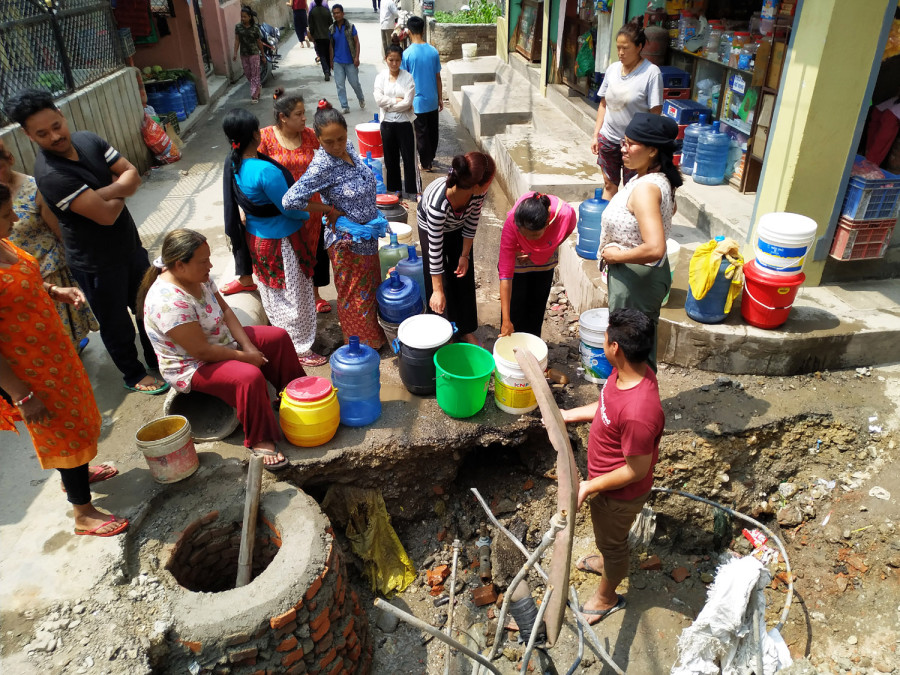 But finding water wasn’t a headache for Shrestha until a few years ago.

“There were times when we had enough water for all 250 homes in the neighbourhood,” said Shrestha, 53, who has been living in the Ikhachhe settlement in Lalitpur for most of his life. “Water crisis has become severe in the last five years after natural spouts started going dry. Now, we only get adequate water in the rainy season.”

When the dry season approaches, families, including Shrestha’s, turn up to water tanker suppliers and even those hardly deliver water on time.

“The natural springs and traditional spouts dried up because we either did not take care of them or extracted too much water from the ground,” said Shrestha.

Many places like Ikhachhe, inside the Kathmandu Valley and also outside the capital city, are now going through what scientists call water stress—a condition in which the available amount of water is inadequate for its needs—mainly during the dry season.

A global study by World Resource Institute has ranked Nepal as the 40th water-stressed country, just two spots ahead of countries like Iraq.

The institute measures the countries’ baseline water stress based on the ratio of total water withdrawals for industrial, agricultural and domestic uses to the available supply.

The study, which reveals that 17 countries, home to one-quarter of the world’s population, face “extremely high” levels of water stress, extracting over 80 per cent water supply every year.

Nepal is among the 44 countries, which face “high” levels of stress, with an average of 40 to 80 percent of the available water extracted every year to meet the annual demand. As a country with overall high-level baseline water stress, Nepal is among those countries facing 2 to 4 cm of groundwater depletion per year, according to the institute’s Aqueduct Water Risk Atlas.

The report citing Nepal—often touted as one of the richest countries for water resources with around 6,000 rivers, rivulets and tributaries—among the highly water-stressed nations has come as both a surprise and a warning.

According to Prabhu Budhathoki, a former member of the National Planning Commission, the water stress status of Nepal is a reflection of unequal relation between demand and supply of water in the country.

“Although the country is ranked among highly water-stressed countries, there are places inside the country—for instance, western districts of Province 4 and Province 5—which are extremely water-stressed,” said Budhathoki. “Groundwater table is depleting and we are not able to hold surface water for long which doesn’t allow groundwater percolation and recharging. Such conditions creates water scarcity which is evident in Province 2 and the Chure range.”

In the past, Nepal made tremendous progress in ensuring water supply and sanitation target as per Millennium Development Goals.

According to Ritesh Kumar Shakya, spokesperson for the Water Supply and Sanitation Ministry, 89 per cent of the country's total population has basic water supply services and by the end of this fiscal year, the government aims to increase it up to 92 per cent. In the next three years, the government wants to achieve universal coverage of basic water supply, according to Shakya.

“Nepal is one of the water-sufficient countries. We have adequate water for drinking, irrigation and other purposes,” Shakya told the Post. “However, we have not been able to properly manage available water.”

Every year, there are numerous reports from across the country about water shortages. The Kathmandu Valley has been parched for years whereas other hill districts and districts lying on the foothills of the Chure range are also facing similar shortages of water, mainly because of depletion of groundwater.

“We are well aware of the massive depletion of water level in the Tarai districts. A similar condition is also reported from hill regions, where locals drill the surface for extracting more water,” said Madhukar Upadhya, a watershed management expert. “Since the pressure is growing on available water because of excessive extraction for various purposes, we need to manage the demand aspects.”

According to experts like Upadhya, there is no dedicated agency that oversees controlling groundwater depletion or reviving the spouts and springs or available resources.

“There is no institution to work for the restoration of natural springs which are disappearing fast. We have the experience of supplying water at both government and civil society level, but not for managing springs and other water sources,” he said.

The Water Supply Ministry manages access to water whereas the Ministry of Energy is concerned about flowing water in rivers.

Shakya, the spokesperson for the Water Supply Ministry, said the ministry is also working on management of water resources.

“We are working with various agencies to restore dried springs and improve the depleting water level,” he said.

Upadhya says local people should make smart decisions regarding the use of available water, which is already limited, especially because sources of water are not adding up.

“We are neither storing water nor preserving available sources. So we have to ultimately change our water consumption practices and cut down on water wastage. Families should practise reusing and recycling water,” said Upadhya. “For instance, we can recycle wastewater for gardening and refrain from polluting water which becomes unusable.”

Meanwhile, like millions of Kathmandu Valley residents, Shrestha family is impatiently counting down the days until the Melamchi project finally launches, ending all their water woes.

“We are hoping life will be easier when water from Melamchi arrives,” said Shrestha. “Pipes have been installed. Even the leakage check has been completed. But we have no idea when the water will start running from our taps.”