While menstrual taboos already lead girls to miss school, a lack of water and sanitation at schools only pushes them to stay away.

Sixteen-year-old Sabita misses two to four days of school every month. As an eleventh grader at the Satdobato-based Mahendra Adarsha Vidyashram community school, this can cause problems with attendance and her courses. But Sabita feels she has no choice, since her school doesn’t have the sanitation facilities she requires during her monthly menstruation cycle. 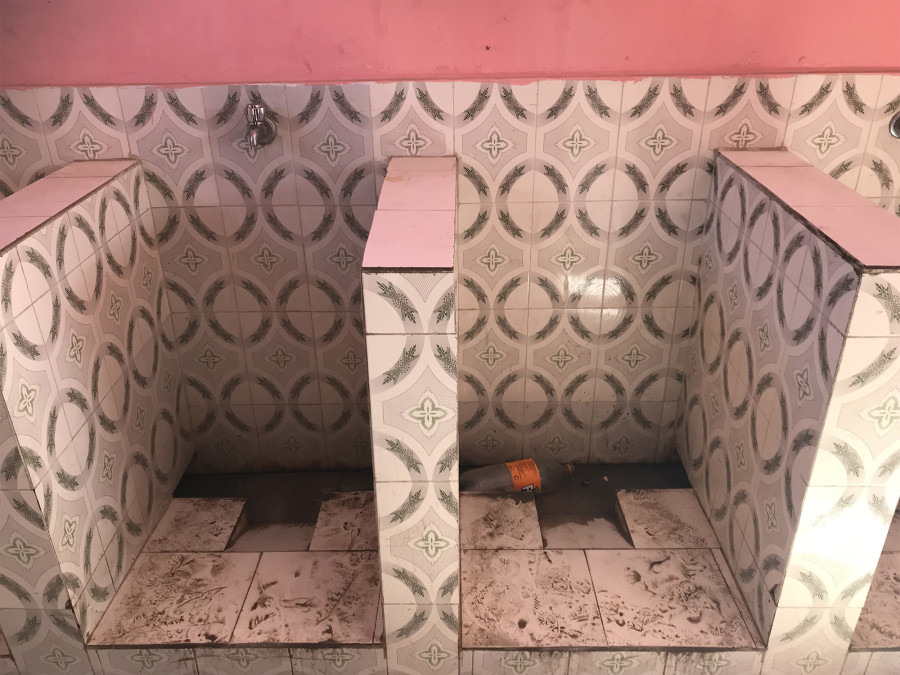 The toilets in Sabita’s school don’t have proper taps or soap. And since two of the women’s toilets don’t have dustbins, Sabita said that there are often used sanitary pads lying on the floor of the toilet. As she doesn’t have anywhere to dispose of her used pads, she puts them in a plastic bag and takes them home, she said.

During menstruation, access to proper water and sanitation facilities is very important for women, especially for young girls like Sabita, to hygienically and confidently take care of themselves. However, many public and community schools across the country still lack proper sanitation facilities, leading many girls to miss classes, as they prefer to deal with their monthly cycles at home.

A 2018 report by the Patan Academy of Health Science found that about 83.3 percent of 168 girls from grade nine and grade ten surveyed in Bhaktapur missed some classes, while 13.7 percent of girls missed at least an entire school day during menstruation. Among the reasons for being absent were a lack of privacy for cleaning/washing, followed by lack of availability of disposal systems and a lack of pads and proper water supply.

According to a 2016 report by UNICEF, 15 to 22 percent of girls from schools in Achham, Bajura and Parsa missed a whole day of school due to menstrual pain, fear of leakage and a need to change pads.

“During menstruation, girls are already feeling weak and some even suffer from cramps, making their period experience even worse,” said Sandhya Chaulagain, hygiene officer at WaterAid Nepal, an organisation that works to build access to safe water, sanitation and hygiene. “If the school doesn’t have basic facilities to secure proper menstrual hygiene, girls are likely to stay away.”

Although Nepal has improved public access to drinking water and sanitation services—with almost 78 percent of schools having access to water supply facilities and 82 percent to basic sanitation facilities—a number of schools still do not receive consistent water supply and adequate waste disposal solutions. Only 25 percent of schools in the country have fully functional water schemes, according to 2016 report by UNICEF.

But a more pressing problem for young girls is the fact that most schools do not have sanitary pads to provide students during emergencies. Sabita reported that her teachers say it is the responsibility of the students to take care of their periods themselves.

According to 14-year-old Indira, an eighth grader at the Siddhi Mangal School in Siddhipur, Lalitpur, she had had to return home mid-way through classes, as she didn’t have a sanitary pad on her.

“Our school didn’t have sanitary pads,” said Indira, who prefers to stay at home during the first two days of her period. “I was so embarrassed and scared that boys would notice the blood stain on my uniform.”

Both Sabita and Indira are being identified only by their first names as they are minors and they fear stigmatisation.

According to Aruna Karki, a gynecologist at Kathmandu Model Hospital, a lack of water, sanitation and hygiene during periods can lead to urinary tract infections. “One in 1o urinary infection cases reported at the hospital is related to poor hygiene during menstruation,” said Karki.

“Due to a lack of sanitary pads at school, girls wear the same pad for the entire day, which can have an adverse impact on their reproductive health,” said Karki. “Girls need to change their sanitary pads regularly, depending on the intensity of their bleeding. They should not be using the same pad for more than six hours.”

Teachers at Sabita’s school, Mahendra Adarsha Vidyashram, are aware of the poor sanitation issues in the school. “It is difficult to provide water in all of the toilets, as we have to purchase water,” said Sanjay Shrestha, discipline in-charge at the school.

It was the same story at Indira’s school, where cleaning in-charge Rita Shrestha blames old infrastructure.

“We need to buy a new water machine, which is expensive and the school cannot afford one right,” said Shrestha. There is only one tap with running water at the school—in the opposite direction of the toilet.

There are legal policies and frameworks to address menstrual hygiene in schools. The School Sector Development Plan (2016-2023) and Total Sanitation Guideline 2017 recognise menstruation as a natural process that requires proper water sanitation and hygiene services in schools.

Both the plan and guidelines state that in order to maintain menstrual hygiene, toilets should have running water, along with a bucket with a cover inside the toilet itself or an incinerator attached outside the toilet, and students must have access to sanitary pads.

Suman Dhau Shrestha, coordinator of a graduate-level master’s programme on sanitation at Kathmandu University, said that despite legal frameworks regarding sanitation and hygiene, there is a lack of concern from the school authorities.

In order to provide girls with easier access to sanitary products, schools like Gyanodaya Secondary School, a community school in Kathmandu, has installed a sanitary pad vending machine for its 1,300 female students. The machine, which was donated by Gandhi International Mission Nepal, a non-government organisation, dispenses a sanitary pad for 1 rupee, according to principal Natikaji Maharjan.

“If the education sector focuses on making every school menstruation friendly, female students will feel comfortable coming to school even during their periods,” said Maharjan.

But according to WaterAid’s Chaulagain, with menstrual taboos already affecting attendance, inadequate water supply and disposal systems and a lack of sanitary pads are only pushing more girls to miss school.

“Menstrual practices such as chhaupadi will take time to be abolished because of their socio-cultural roots,” she said. “However, the immediate solution to discontinuing unhygienic practices during menstruation is to provide water and proper sanitation facilities.”