Nepal likely to get 6.2 million Pfizer doses from COVAX

Nepal is most likely to get 6.2 million doses of Pfizer-BioNTech Covid-19 vaccine from the COVAX facility very soon, a highly placed source at the Ministry of Health and Population said. 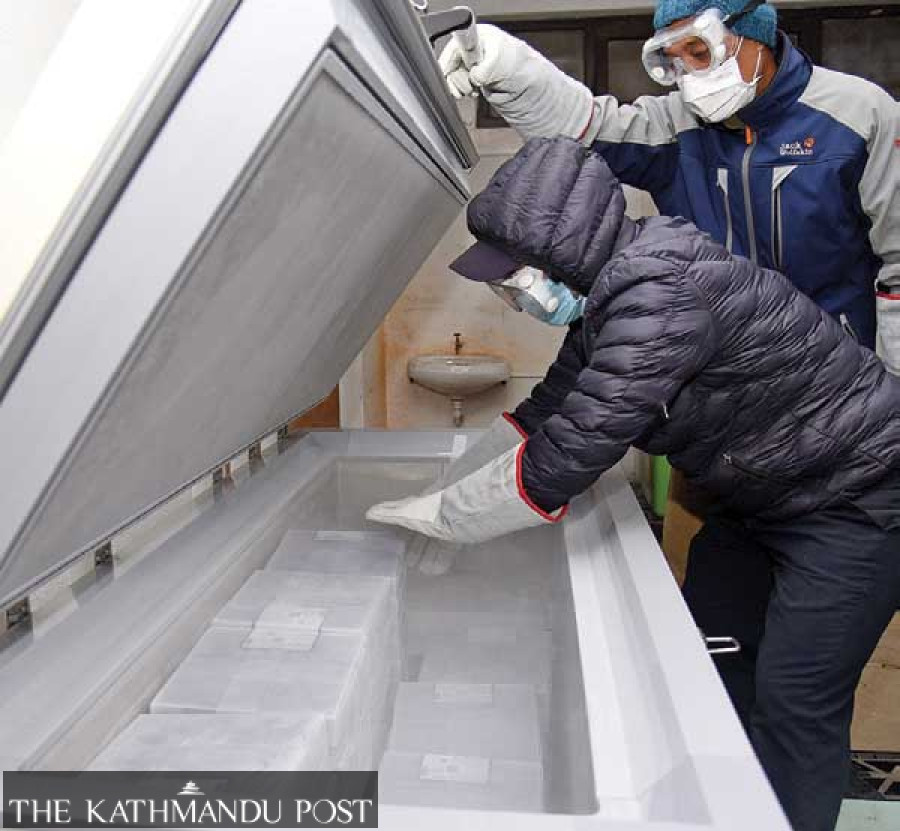 Officials said talks are in an advanced stage and COVAX, the United Nations-backed international vaccine-sharing scheme, itself has proposed to supply the doses to Nepal.

“It has been almost certain that 6.2 million doses of Pfizer-BioNTech vaccine will arrive in Nepal very soon,” an official at the Health Ministry said, asking not to be named, as he is not authorised to speak to the media. “Talks are in an advanced stage, and I think they will conclude in the next couple of days.”

Earlier, Nepal had received 100,620 doses of Pfizer-BioNTech Covid-19 vaccine in October and 664,560 doses in December, from the facility.

For a longer-term storage, the vaccine has to be kept at around minus 80 degrees Celsius, and can be stored in normal temperatures (2 to 8 degree Celsius) for up to 31 days.

The Health Ministry has decided to provide the jabs from 22 hospitals throughout the country to people with compromised immunity—those suffering from renal failure, cancer and heart patients and those having diabetes.

Later, the vaccine was also administered to children between 12 and 17 years in 20 districts including three Valley districts of Kathmandu, Bhaktapur and Lalitpur.

Pfizer-BioNtech is an mRNA-based Covid-19 vaccine developed jointly by the US-based Pfizer and the German firm Biontech. It uses a copy of a molecule called messenger RNA (mRNA) to produce an immune response.

It is said that the Pfizer-BioNtech vaccine was 95 percent effective at preventing laboratory-confirmed infection with the coronavirus.

“Evidence shows mRNA Covid-19 vaccines offer similar protection in real-world conditions as they have in clinical trial settings—reducing the risk of Covid-19, including severe illness by 90 percent or more, among people who are fully vaccinated,” the US Centers for Disease Control and Prevention said on its website.

“We will request the National Immunisation Advisory Committee for permission to use Pfizer vaccine as second dose and booster shots,” Dr Bibek Kumar Lal, director at the Family Welfare Division, told the Post. “Studies have shown that mix and match of the Covid-19 vaccine will increase the immunity level.”

A meeting of the committee will be convened soon, to discuss mixing and matching Covid vaccines, officials said.

Scientists around the world have been discussing vaccine cocktails and trying to figure out the best mix for better protection against the coronavirus.

Administering a different Covid-19 vaccine after a single dose of the AstraZeneca or Pfizer-BioNTech vaccine is safe and effective and could boost the immune response, a study of 1,000 volunteers has found, according to a report published on December 7 in the British Medical Journal.

The results, reported in the Lancet, another British journal, showed that having a dose of the Moderna vaccine after an initial AstraZeneca or Pfizer dose induced a higher binding and neutralising antibody response than seen after two doses of either AstraZeneca or Pfizer.

Studies have shown that people who receive two different Covid-19 vaccines generate potent immune responses, with side effects no worse than those caused by standard regimens, according to a report published in the science journal Nature in October.

But now, for the first time, researchers have shown that such ‘mix and match’ regimens are highly effective at preventing Covid-19—roughly matching or even exceeding the performance of mRNA vaccines like Pfizer-BioNTech and Moderna.

Nepal needs to vaccinate around 26 million of the little over 29 million people, as around three million are children under five years of age. Authorities had decided to inoculate children between five and 11 years but no deal has been reached so far to purchase vaccines for them.

So far, 13,734,390 people—or45.2 percent of the total population—have been fully vaccinated against Covid. The Health Ministry said 282,724 people have taken booster shots as of Thursday.