‘At capacity’? A Nepali park reckons with its rhinos

CHITWAN, Nepal —There was a time when Dhan Maya Tamang and her husband, Prem Bahadur, both in their 50s, worried about rhinos straying into their settlement.

“They would come out mostly in the night and raid our paddy fields during the harvest season,” say the Tamangs. “Our fences were of little help. We were helpless as we cannot do anything to them. They are protected by law.”

In the past few months, no rhino raiding parties have descended on the village.

“We don’t know why,” say the couple, who live near the Baghmara Community Forest, part of the buffer zone on the eastern side of Nepal’s Chitwan National Park.

The Tamangs are not the only ones trying to figure out what’s going on with the greater one-horned rhinos (Rhinoceros unicornis) of Chitwan, which hosts the world’s second-largest population of the species.

Earlier this year, the government formed a committee to look into a recent increase in natural deaths among the park’s 600 rhinos. Following a brief investigation, it hinted that Chitwan may have reached its carrying capacity for rhinos. 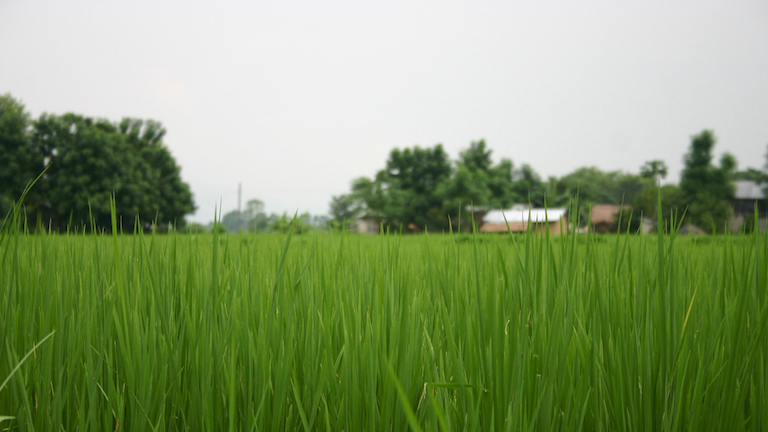 A rice field on the outskirts of Chitwan National Park. Tender, succulent paddy is a particularly attractive meal for rhinos who wander out of the park. Overcrowding within protected areas encourages animals to stray, increasing the likelihood of human-wildlife conflict. Image by Prateek Runga via Flickr CC-BY.

The limits of growth

Historically, the area currently occupied by the national park was uninhabitable due to malaria. But in the 1950s, government efforts to eradicate the disease led to a rapid migration of people to these fertile floodplains.

Experts question how long it’s possible for both of these numbers to rise in tandem.

“We recommended that a study be commissioned to assess the carrying capacity of the national park,” says ecologist Laxman Poudyal, who headed the committee investigating rhino deaths. “As human population pressure increases on the borders of the national park, it is necessary to ascertain how many rhinos can live in this park,” he said.

While Poudyal’s team investigated, conservationists got both good news and bad news from the rhino census in India’s Kaziranga National Park, home to the world’s largest population of the species. While 2,413 rhinos were counted in the 430-square-kilometer (166-square-mile) park, the number was only 12 more than the population in 2015 — an annual growth rate of just 0.5 percent.

This has led Indian authorities to point to the same issue of “carrying capacity”: They fear the current habitat cannot support any more rhinos. 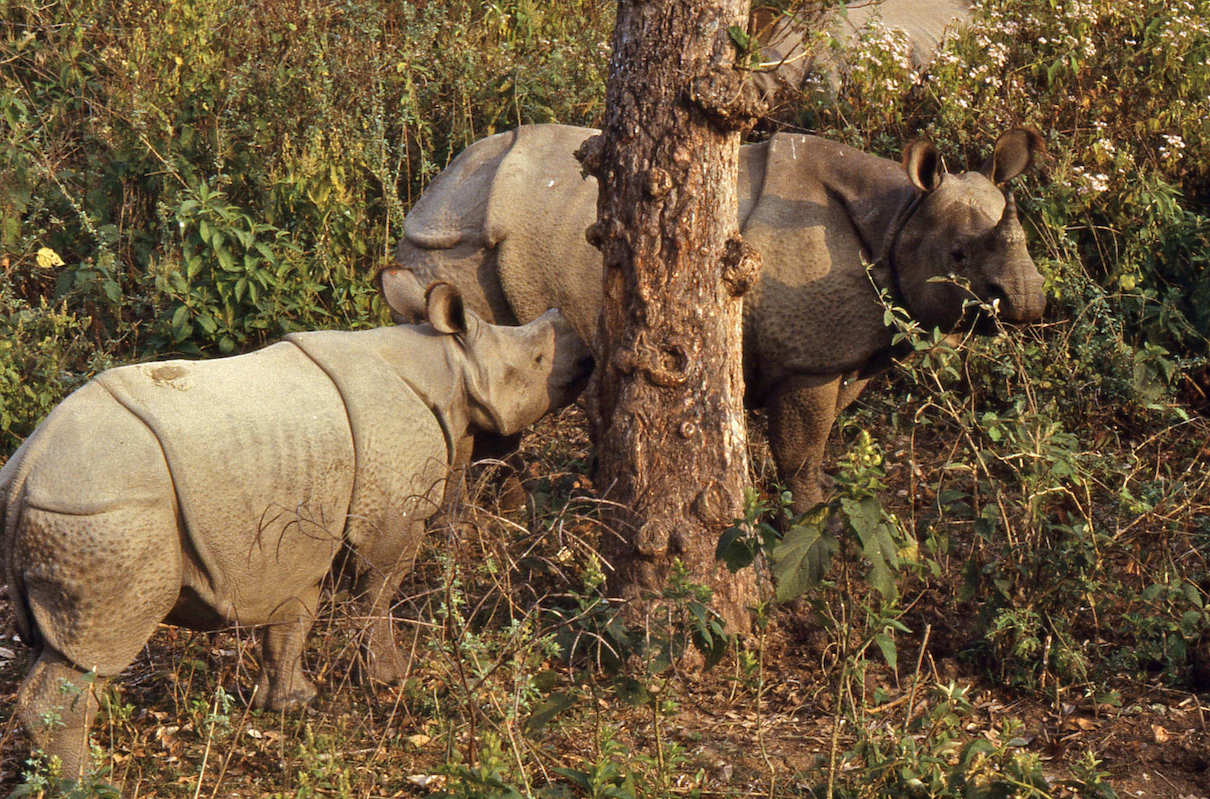 How many rhinos can Chitwan support?

“Carrying capacity” has been a buzzword in Nepal’s conservation sector for more than two decades, but there has yet to be a scientific assessment of Chitwan’s actual carrying capacity for any species, says the park’s former warden, Narendra Man Babu Pradhan. Only population models have been used, which he says don’t fully account for factors like habitat degradation and interspecies competition for resources.

Estimates of the park’s carrying capacity vary wildly. A report prepared by the IUCN/SSC Rhino Specialist group in 1997 suggested the park could support only 500 rhinos in what was at the time a 932-square-kilometer (360-square-mile) habitat. Then, a study funded by the Dutch government in the early 2000s used population models to suggest that the equilibrium population, “where gains are exactly balanced by losses,” was around 1,000.

Ram Kumar Aryal, head of the Biodiversity Conservation Centre at the Nepali NGO National Trust for Nature Conservation, says he believes the park and its surroundings can support more than 1,500 rhinos. He points to the 2003 eviction of Padampur, a cluster of 16 small villages inside the park. The resettlement of the villagers freed up 20 square kilometers (7.7 square miles) of prime rhino habitat along the Rapti River. “In addition to that, a lot more areas around the buffer zone have been developed as potential habitats for rhinos,” he says.

Aryal also cites Kaziranga, which is much smaller than Chitwan. “Kaziranga is around half the size of Chitwan. If Kaziranga can sustain 2,000 rhinos, Chitwan can support way more than that,” he says.

Mammalogist Shant Raj Jnawali agrees. “We haven’t seen major health issues with the rhinos, nor have we seen any kind of malnourishment,” he says. “If the park had reached its carrying capacity, we would have definitely seen this happen.”

But while in Kaziranga the population growth rate has dwindled, raising concern among scientists there, in Chitwan the population increase over the past decade has been robust. Between 2005 and 2015, the annual growth rate of the rhino population fluctuated between 3 and 6.9 percent (the lower figures are attributed to poaching deaths during the decade-long Maoist insurgency in Nepal, which ended in 2006, and the years of political transition that followed). 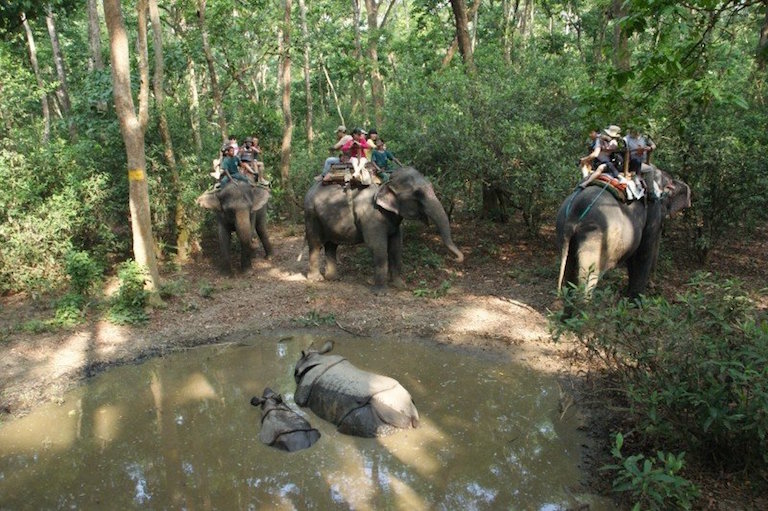 Tourists on an elephant safari view rhinos in Chitwan National Park. Tourism has become a crucial source of revenue for the surrounding communities. Public domain image.

This doesn’t mean that park authorities and local people disregard the idea of carrying capacity, Jnawali says. “There are signs that that the rhinos in Chitwan are congregating on the western sector. This has intensified competition among rhinos for food and habitat.” With increased pressure on resources in this area, it’s possible that the western sector, but not the whole park, has hit its carrying capacity for rhinos.

Aryal says a simple way to deal with the problem is to pay extra attention to conserving existing rhino habitats in the park, mostly on the eastern side so that the rhinos congregating on the western side can be dispersed throughout the park and the resources can be used optimally. In addition, he says plans are needed to restore degraded rhino habitat in the eastern part of the park. Aryal also opposes recent initiatives to relocate rhinos from Chitwan to other protected areas, saying that removing them affects the park’s environment and alters the sex ratio of the population. “This has disturbed the balance in the park,” he says.

Back in their settlement, the Tamangs hope the rhinos return to the eastern sector of the park. “We depend on tourists for our livelihoods. We face problems when there are more rhinos than required in the park,” they say. “But when they are gone, our livelihood is threatened. We need to have just the right number.”

FEEDBACK: Use this form to send a message to the author of this post. If you want to post a public comment, you can do that at the bottom of the page.

Popular In the Community