Chitwan National Park officials have released as many as 24 gharials reared at its breeding centre into the Rapti River. 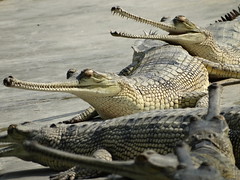 Twenty-two female gharials and two males reared inside the CNP were released into the Rapti River in the presence of Bharatpur Metropolitan City Mayor Renu Dahal.

CNP Chief Protection Officer Bed Kumar Dhakal said that they planned to release 100 gharials into the river this year. Gharial Breeding Centre has more than 500 gharials at present. Eggs collected from the river are hatched at the breeding centre.

A breeding centre was set up in 1978. A total of 1,380 gharials have been set free in different rivers to date, said Dhakal. The breeding centre has more than 500 gharials at present. Eggs collected from river banks are hatched at the centre.

Contamination of river water, encroachment and loss of river-borne materials have posed a challenge to conservation of gharials. “Had we not bred and set gharials free in the rivers, no river in the country would have had gharials,” said Dhakal.

Releasing the gharials into the river, Mayor Dahal said her office would lend all possible support for the protection of gharials.