DHANGADHI: On November 22, Ram Bahadur Rokaya and Ram Bahadur Thagunna were walking on the road at Krishnanagar Municipality-2 in Kanchanpur district. A speeding vehicle hit them and Rokaya died of injuries at the Seti Provincial Hospital. Police have yet to nab the vehicle and the driver. 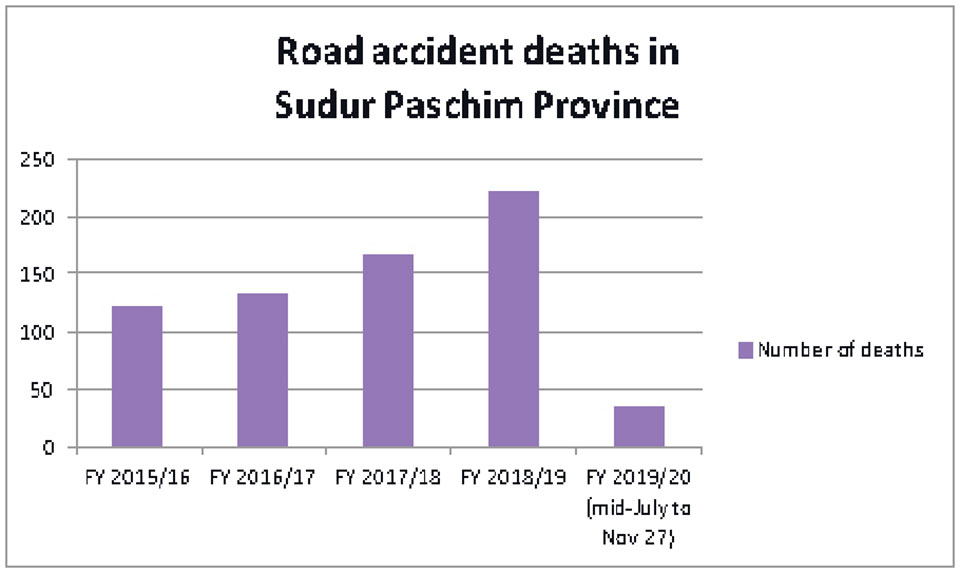 A week ago, Dev Ram Tamata, a resident of Godawari Municipality-2, Kailali, was killed after being hit by a jeep (Se 1 Ja 739).

On October 31, two children were killed in Banaiya, Kailali, when a passenger bus hit them. The bus (Na 7 Kha 6046) en route to Kathmandu from Mahendranagar hit the children at around 5 in the evening at Bardagariya Rural Municipality-1. Eight-year-old Anshu Chaudhary and 12-year-old Laxman Chaudhary died in the course of treatment at a local hospital.

Likewise, on October 26, Ram Bahadur Lopchan died after being hit by an autorickshaw in Dhangadhi Sub-metropolitan

On November 14, in Krishnanagar Municipality of the same district, Tiludevi Kunwar died after being hit by a motorcycle.

“Overspeeding drivers are the culprits,” Laxmi BK, a resident of Gauriganga Municipality-2, who sustained injury in a recent accident, said.

“Vehicles should limit the speed in residential areas. The pedestrians feel unsafe,” Man Bahadur Dhami, a local said, adding that despite the increase in the number of accidents, the authorities are not doing anything.

“Inside the Bardiya National Park, the speed limit for vehicles is 40 kilometers per hour. But very few drivers obey the rule. The overspeeding vehicles pose threat to both humans and the wildlife,” Ram Chaudhary, a local said.

Meanwhile, SP Lokendra Shrestha, chief of the Provincial Traffic Office, said that the traffic police is working to create awareness against overspeeding. “The traffic police is putting up posters along the roads to warn the drivers against the dangers of overspeeding,” Shrestha said, adding that the pedestrians should also be careful. He further added that haphazard parking on the roads is also responsible for the increasing number of accidents.

In the four months of the current fiscal year, 35 people died in road accidents in the province.