The District Veterinary Hospital and Livestock Service Expert Centre has launched a vaccination drive against diphtheria in the affected area.

As many as seven yaks belonging to Kanchha Gurung died at Pipche grazing land in upper Mustang in the first week of August. The yaks, according to Kanchha, showed similar symptoms—excessive salivation, swollen throat and breathing difficulties—at the pasture land at an altitude of about 4,300 metres above sea level in Nisyang Rural Municipality-8. 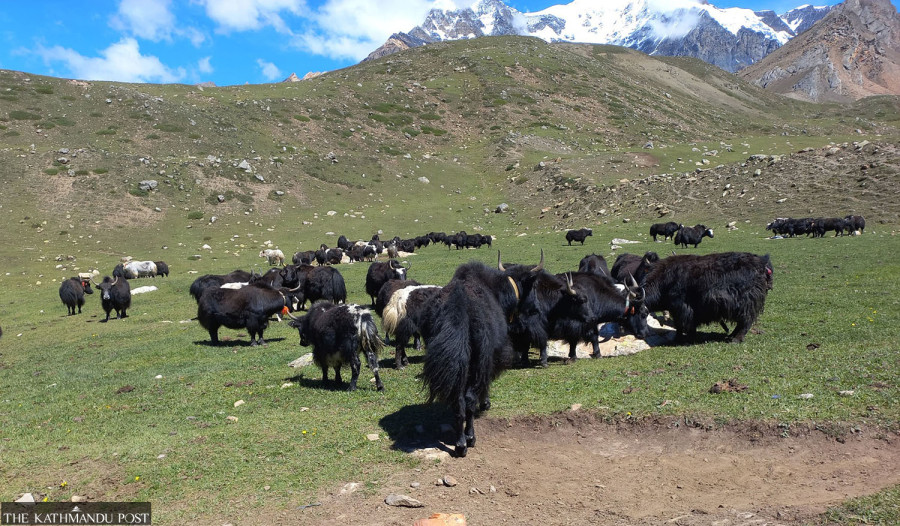 Pembadinji Gurung of Ghyorkang highland in Nisyang-2, which lies at an altitude of 4,600 metres above sea level, also lost six yaks to a similar disease almost at the same time. Animals belonging to the farmers of Wards 3 and 5 in Nisyang Rural Municipality also died from similar conditions. The animals had additional symptoms of swollen legs and testes.

Farmers in various pasture lands in upper Manang, a mountain district of Gandaki Province, have started to worry after their yaks started falling ill and dying. A technical team led by veterinarian Narayan Kusum, chief at the District Veterinary Hospital and Livestock Service Expert Centre in Manang, was deployed in the affected area after the centre was informed about the disease outbreak. According to Kusum, a total of 30 yaks died and around 40 others fell ill in the area.

“It was found that 12 yaks died in Ghyorkang, 10 in Aisa highland and eight others died in Tanki pasture land. We collected the nasal and rectal swabs of the sick yaks and gathered samples of the heart, lungs, liver and bone marrow of the dead animals. We suspected that the yaks died from diphtheria. The samples were then sent to the regional veterinary laboratory in Pokhara,” said Kusum.

According to Kusum, there are a total of 722 yaks in the pasture lands of Ghyorkang, Aisa and Tanki.

The District Veterinary Hospital and Livestock Service Expert Centre in Manang has launched a vaccination drive against diphtheria in the affected area following the confirmation of the disease. According to veterinarians, a ring vaccination campaign has been launched in the area to control the disease.

The veterinarians urged the farmers to restrict the movement of the sick yaks to prevent the disease from spreading. “The dead animals should be buried safely. But the carcasses were found left in the deserted area for vultures to feed on,” said Kusum.