Durga Bahadur Saru began weaving Palpali dhaka on a handloom in 1987. He was just 16 years old. There was great demand then for the hand-woven fabric with its colourful geometric patterns, and business was good. 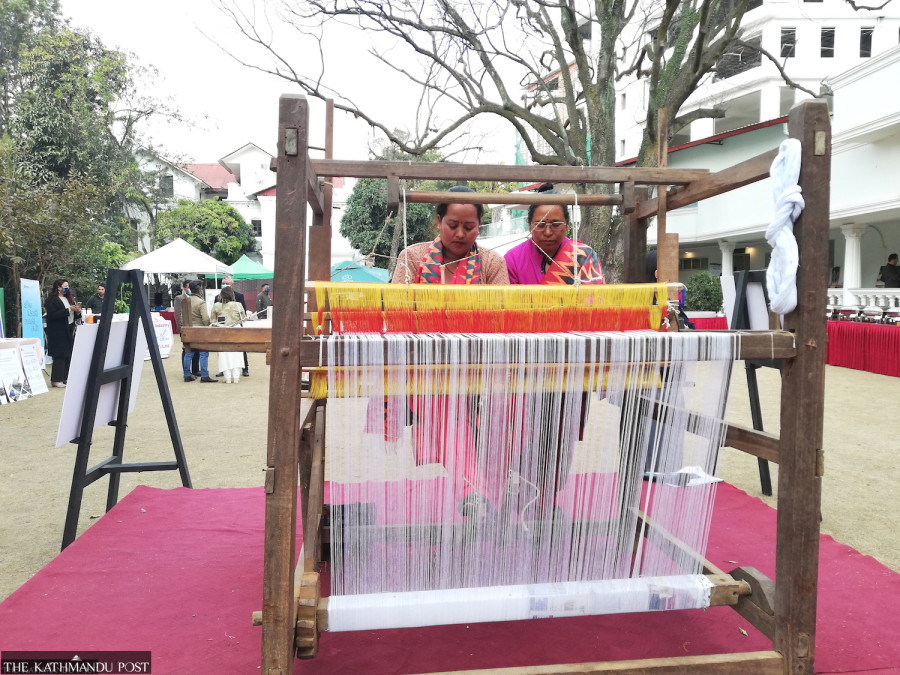 The dhaka industry in Palpa started in the late 1950s. The industry flourished for almost three decades. During its heyday, it employed more than 2,000 weavers, and the distinctive cloth was sold in over 36 districts across Nepal.

Imported products were scarce and expensive then, and Nepalis bought the textiles from Palpa in large quantities.

But at one time, a flood of cheap imports had nearly pushed the locally made fabric out of the market. Local weavers held out against the foreign onslaught with persistence, and the industry is now making a splendid comeback.

Palpali dhaka maker Saru is now 50 years old. "Today, my entire family including my wife, son and daughter-in-law are engaged in the Dhaka weaving business,” he told the Post.

Saru’s hand-woven dhaka is sold in cities like Butwal, Pokhara and Kathmandu. “Sometimes we get large orders and we are unable to fulfil them.” Saru has 15 weavers working for him.

Saru's factory turns out 250 metres of dhaka cloth monthly. The price of the fabric ranges from Rs600 to Rs2,500 per metre depending on the quality.

Saru remembers the hard times too. The Palpali dhaka industry was at its peak in the early 1990s; and then in 1996, the Maoist conflict erupted and brought ruin to Nepal’s economy and small and micro enterprises.

“Many fled their towns and villages for safety. Looms were abandoned, and the sound of the shuttles faded into oblivion. With no weavers available, the factory owners saw no hope of a revival. One by one, they closed their doors. More than 30 factories in Palpa shut down for good, and the few that held out operated with drastically reduced output,” according to a report entitled "Palpali", produced by the Palpali Dhaka Association, supported by the UKaid Skill for Employment Programme.

“The fabric saw its glory days during the reign of King Mahendra, when dhaka topi was declared Nepal's national cap and a symbol of Nepali identity.” Wearing Palpali dhaka became a status symbol and fashion statement, according to the report.

After the painful decade of the Maoist civil war (1996-2006), there was the Royal massacre of 2001 that marked the subsequent end of Nepal’s long standing monarchy.

The hilltop town of Tansen, the administrative centre of Palpa, was a flashpoint during the fighting. In the industrial sector, radicalised labour unions and extortion became commonplace. No industry escaped the impact of the war, least of all Palpali dhaka.

Nepal saw peace after the government and the Maoists signed a comprehensive peace accord in 2006 and trade picked up again, but there was not much of an industry left to accommodate it, according to the report.

Many people had migrated abroad during the conflict in search of work, leaving industries facing acute labour shortages. Palpali dhaka was in demand again, but there weren't enough weavers.

“This gap in the industry was met by cheap, low grade, imported fakes which flooded the market, diluting the image and integrity of the original hand loomed fabric,” the report said.

“Demand is coming back,” said Saru. Dhaka makers like Saru are hopeful that they can revive the lost glory, thanks to the Palpali Dhaka Association and the UKaid Skills for Employment Programme.

Industry insiders say that the remarkable revival of the Palpali dhaka tradition can serve as a shining example of how Nepal could tackle its severe livelihood, ecological and cultural crises by promoting traditional homemade products that machines cannot replicate.

“The training provided by UKaid has helped many dhaka weavers increase their productivity,” Saru said.

Ashoke Kumar Shahi, mayor of Tansen, one of the promoters of the skill enhancement programme, said Palpali dhaka productivity and production had gone up despite the pandemic.

The programme was launched in 2019. The partnership between the Palpali Dhaka Association and UKaid mobilised a cadre of national and international actors and institutions to improve access to raw materials (yarn), expand the pool of skilled and motivated workers and inject innovations.

The partnership has also helped in establishing internationally aligned fair trade standards, facilitate access to start-up and growth capital, enhance branding and marketing, and close the digital divide for the industry.

The brightly patterned hand-woven cloth is widely produced in Palpa in western Nepal, which Purna Maya Maharjan and her husband Ganeshman introduced to the district in 1958.

Pollitt said that in just two years and despite the destruction spread by Covid-19, the Palpali dhaka industry has grown significantly.

“Ninety-eight percent of women working in the Palpali dhaka industry are housewives. The model has mainstream women economic empowerment and establishment of public-private partnership which has significantly added to the outcome,” Pollitt said.

Dhaka products such as hats, scarves, handkerchiefs, purses, waistcoats, bags and ties are popular among local consumers who also buy them for souvenirs or as gifts for friends and family.