As many as 1,937 complaints, majority from Madhesh, received in eight days. Victims say protest will continue until perpetrators are booked.

A total of 1,937 complaints were registered against loan sharks across the country until August 21, with the highest—1330—filed in the Madhesh Province. 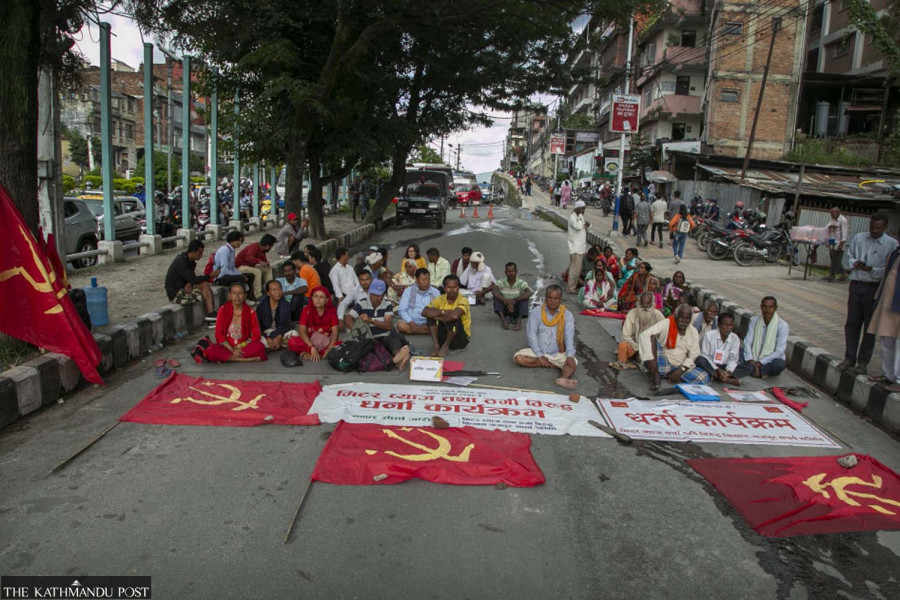 The government on August 13 had asked victims of loan sharks to register complaints at their respective District Administration Offices by August 21.

The move followed formation of a task force to study the situations of the victims and how such financial crimes can be controlled after victims from various districts descended on Kathmandu demanding justice.

The victims have been protesting at Maitighar for the past three weeks demanding justice.

The Home Ministry also formed a six-member task force led by joint secretary Bhishma Bhusal on August 12 to investigate the matter and study how such crimes can be controlled.

As many as 60 victims have been regularly demonstrating at Maitighar, rain or shine, demanding tough actions against the usurious moneylenders.

The task force formed by the government has expedited the investigation and the process of bringing the financial criminals to book, say the task force members.

A loan shark is a person or a group that loans money at extremely high interest rates. To collect debts, they often resort to threats and violence.

The task force held a meeting on Monday to discuss how they can work in the field to investigate the complaints.

Bhusal, coordinator of the task force, says they will take victims’ complaints regularly, and they worked to the deadline to draw an outline of the situation. “The process of registering complaints and taking actions will be continuous, as these crimes can occur in the future too,” Bhusal told the Post.

“We have already started the process to arrest and book the perpetrators,” Acharya told the Post. “The task force will further investigate the nature of the crimes and the possible actions that could be taken now and in the future.”

The task force is also in discussion with the protesting victims in Kathmandu. “We have asked them to return home and cooperate with us in our investigation,” Bhusal said.

Until now, the task force has collected data on loan sharking from all districts, and discussions on the modality of the investigation and actions are underway, say members of the task force the Post talked to. “We will notify the CDOs, regarding the steps that should be taken with utmost urgency,” said Bhusal.

The task force was given a month to find a concrete solution to the issue and take necessary actions—ten days have already passed. “We are working day and night to sort out the issue in the remaining 20 days,” said Bhusal.

The "meter byaj" victims protesting at Maitighar have been staying in a temporary shelter in Kirtipur on the southwestern rim of Kathmandu.

Ram Surat Gupta, chairperson of the protest group Meter Byaj Kisan Sangharsha Samiti, says they discussed with Home Ministry officials on Monday. “The officials have promised they will sort out the problems and are searching for the criminals as some of them have already fled.”

As the government has all the resources and power, Gupta adds, if they work properly, they can arrest and take action against the loan sharks in a day. “We will see how they will take action. Until then, we will continue the protest,” Gupta told the Post.