These risks are caused by political and administrative errors made in managing the public economy.

The Nepali state has been struggling hard to liberate itself from the perpetual perils of a small size economy, low level of capital formation, and youth unemployment. Despite key progress made in elected democracy, the country has not been able to enlarge the size of its economy and bring substantial economic fruits to the people. The GDP at its current price is just Rs48.5 billion, and annual per capita income is around $1372. These figures are even below than the South Asian average. 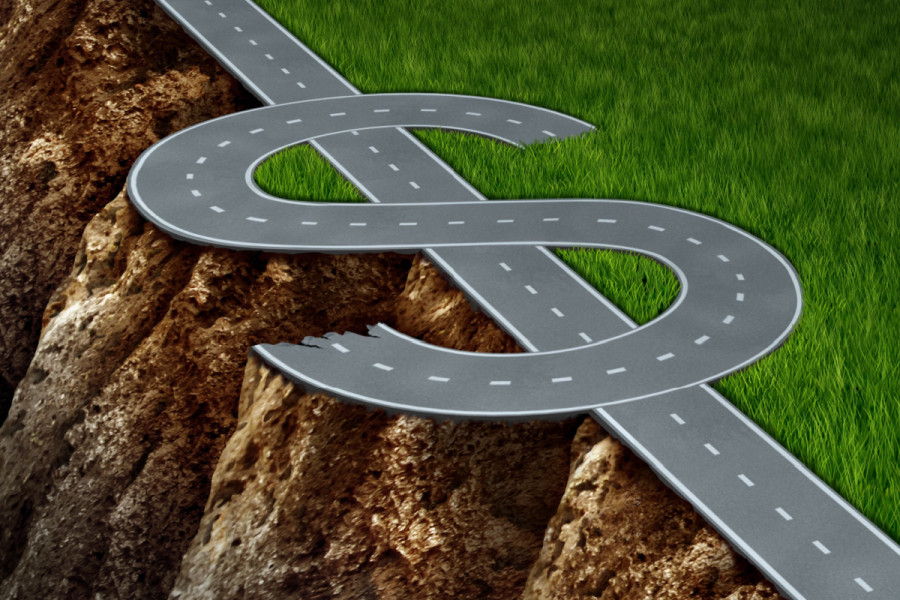 For Nepal, economic progress is essential both for the equitable prosperity of people and the sustainability of democratic gains. Many democracies have collapsed due to slow progress on economic fronts. Asian financial crises of 1997, the global financial crisis of 2007-08, and recent macro-economic crises in Sri Lanka have shown that the key to sustainable economic prosperity lies with the macro-fiscal health of the country.

Fiscal risks are the factors that may cause fiscal outcomes to deviate from expectations or forecasts. It is the exposure of governments to events or circumstances that could cause short-to-medium-term variability in the overall level of revenues, spending, fiscal balance, and key macroeconomic variables. Fiscal risks are generally categorised into general economic risks, specific fiscal risks, and institutional risks. The deviations in macro-economic forecasts, such as growth rate, public debt, exchange rate, inflation, interest rate etc., are examples of general economic risks. Specific fiscal risks consist of explicit contingent liabilities created by government guarantees to public corporations to secure their borrowings and implicit contingent liabilities created mainly by sub-national governments. The third category of fiscal risk is an institutional or structural risk due to weaknesses in the structure of public economics, such as domination of revenue in one or two sources or excessive earmarking of revenues to a specific sector.

Nepal is vulnerable to fiscal risks which are manifested in the structure of economic variables. The exchange rate of the Nepali rupee against the dollar has reached Rs132.83 for $1 despite the peg of Nepali rupees with Indian rupees. Depreciation of the value of a currency against international currencies is not beneficial for an import-driven economy like Nepal. Inflation, as measured by the consumer price index, has also reached 6.32 percent, which is another sign of fiscal risk. Inflation in Nepal has been driven by the administrative weakness of the government, such as syndicates, cartels, and the greed of private traders which could be controlled by strict enforcement of regulatory measures. Currently, the country is facing the problem of stagflation—low growth and high inflation which is also a concern of fiscal risk.

The biggest headache of our economy is a high level of trade deficit. According to the economic survey of 2020-21, the share of export in foreign trade was 7.8 percent, but the share of import in foreign trade was 91.90 percent. According to the World Bank, Nepal’s current account balance as a percentage of GDP is about 15 percent negative. For 2021, such balance in India is negative 1.1 percent, and in Bangladesh, it is negative 3.7 percent. Our northern neighbour China is enjoying a surplus in the current account. Up until 1976, Nepal was enjoying its current account surplus. Since 1977, we have been perpetually facing the problem of the current account deficit.

According to the Ministry of Finance, the total outstanding debt as a percentage of GDP for 2021 crossed 40 percent. In a remittance-driven economy like Nepal, even this 40 percent seems to be sensitive and any increase in the level of public debt beyond this threshold could invite risks in the Nepali case. Remittances have alleviated poverty and unemployment. Household data shows that remittances have boosted consumption of productive goods (such as durable goods, education and health) without discouraging the labour supply of remittance-receiving family members.

However, the prolonged addiction to remittance has become another source of fiscal risks in Nepal. Remittance accounts for about 23 percent of the GDP, and it has fueled a consumption-led economy hurting local production. Many economists are worried about this vulnerable source. Though remittance provides some safety net to people, recent evidences have suggested that remittance does not bring sustainable economic prosperity in the long term. Remittance has also negative side effects on the political economy. The government may be less responsive to the needs of people as they do not have strong pressure to work hard due to a large number of active youths living outside the country. The structure of the budget is also a source of fiscal concern. For the fiscal year 2020-21, the recurrent expenditure accounts for 19.78 percent, whereas the share of capital expenditure to GDP is just 5.35 percent. This is a symptom of a steady state where a country spends a substantial amount of public budget for regular lability leaving limited resources for employment, growth, and productivity.

There are several ways the government can address fiscal risks. The first approach is to reduce the probability of the risk occurring. This can be applied to some endogenous risks where the triggering events are under the control of the government. Some countries, like the Netherlands and the Czech Republic, have put limits on the total volume of government guarantees. The second approach to mitigating fiscal risks is to reduce the government’s exposure to risks. Government can enforce building codes to insulate the earthquake or insurance facilities to cover some risks. The third approach is to manage the risks through the annual provision of a budget or the provision of a buffer fund.

Adopting fiscal rules through laws is one of the widely used approaches to mitigating fiscal risks. A fiscal rule is a long-lasting constraint on fiscal policy through numerical limits on budgetary aggregates. In Nepal, the limit of internal borrowing has been set by the independent constitutional body called National Natural Resources and Fiscal Commission. For the current fiscal year, the amount of internal borrowing for the federal government should not be more than 5.5 percent of GDP. The European Union has set the overall fiscal deficit ceiling at 3 percent of GDP and the debt-to-GDP ratio at 60 percent of GDP.

Nepal needs to follow the path of fiscal consolidation rather than fiscal populism. Despite some merits in the constitution, it has created huge political liabilities for the country, which may invite fiscal risks in the future. One of the major concerns related to fiscal risk is the leviathan behaviour shown by all tiers of government by expanding unnecessary organisations at the cost of taxpayers. Strict adoption of fiscal rules is essential for a country like Nepal. One option could be to empower the National Natural Resource and Fiscal Commission to set limits on revenue and expenditure rules.

The underlying causes of fiscal risks are the political and administrative misbehaviour in the management public economy. We need a huge public investment to boost our economy, and we must expand the fiscal space to mobilise these resources. We have two options: expenditure rationalisation and revenue maximisation. Nepal’s tax-to GDP ratio has already reached 21.88 for the fiscal year 2021-22. This ratio is higher than the South Asian average. The best option to mobilise resources for public investment is to rationalise the expenditures which require strong administrative discipline and political commitment. Managing fiscal risks is protecting the economic life of people. Though the fiscal distress is not severe, we need to adopt prudent measures to control fiscal risks.