Nepal had planned to eliminate measles by 2019, but the deadline was later revised to 2023.

On Monday, a six-year-old boy from Ward-7 of Nepalgunj Sub-metropolitan City was taken to a nearby health facility for immunisation. When health workers inquired about his vaccination status, his parents said that their son has never had any vaccine in his life. 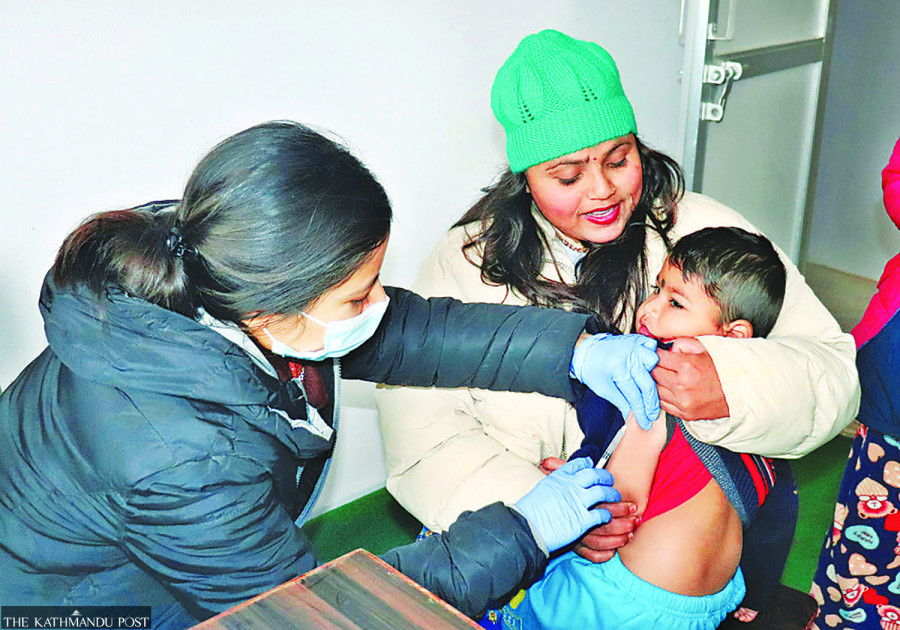 “We were not surprised,” Rajan Shahi, a public health inspector, who has been deployed in wards of the Sub-metropolis to study the status of childhood immunisation, told the Post from Nepalgunj. “There could be hundreds of such cases in Nepalgunj alone.”

Measles is a contagious viral disease transmitted through fluids from the nose, mouth or throat of infected persons.

Nepal had committed to eliminating measles by 2023 after missing the earlier deadline of 2019 earlier. But the outbreak of the deadly viral disease at the start of 2023 shows that the country is nowhere close to meeting the measles elimination target. To declare measles as eliminated, the number of cases should be less than five in every 1,000,000 people or no cases throughout the year.

The Nepalgunj Sub-metropolitan City has been witnessing a massive measles outbreak for the past one week. A 31-month old toddler died and around 80 cases of infection have been reported in the sub-metropolitan city.

The outbreak, which was reported from Ward 5 and 6 of the sub-metropolis, has spread to 11 of the 23 wards. The National Public Health Laboratory, which tested blood samples of suspects, confirmed infection of the viral disease in children as well as adult populations.

Health authorities have started mass vaccination against measles, targeting six months to 15 years old children. Adult population including teachers have also been infected by the virus.

Notably, Banke was declared a fully immunised district in March 2021.

“Most of the infected children are unvaccinated—who never got vaccines or were not fully immunised,” said Ram Bahadur Chand, the chief of the Health Division of the sub-metropolis. “The outbreak of measles here suggests loopholes in our vaccination programme.”

Child health experts say a low vaccination coverage, floating population, lack of public awareness about the importance of vaccines and apathy of the government agencies concerned to plug the loopholes are some reasons behind the regular outbreaks of measles in different parts of the country.

“Outbreak of deadly diseases in a district that had been declared fully immunised raises questions about the authenticity of government agencies’ claims,” said Dr Shyam Raj Upreti, a child health expert who is also a former director general at the Department of Health Services. “Immunisation coverage is always low in big cities and backward communities. Had we been able to focus programmes in such areas, we could have avoided the outbreaks.”

A recent report of the Nepal Demographic and Health Survey-2022 carried out by the Ministry of Health and Population shows that four percent of children in the 12-23 month age group have received no vaccination.

This figure was just one percent in 2016, and the rapid surge in the number of unvaccinated children poses a serious threat to the country’s achievements in immunisation made over the years through huge investments, child health experts warn.

“This is alarming,” said Dr Jhalak Gautam, former chief of the Immunisation Section at the Family Welfare Division under the Department of Health Services. “We are at risk of outbreaks of multiple vaccine-preventable diseases. All our achievements in child health are at risk.”

Health workers serving in Nepalgunj say most of the measles outbreaks have been reported among the marginalised local Muslim community as well as other backward communities where the level of awareness on regular immunisation is low. Moreover, rumours about measles vaccines causing impotence and high fever are also still prevalent in these communities.

“Health workers comprising experts from the World Health Organization and UNICEF have been mobilised in the affected areas,” said Chand.

Experts say after the declaration of a fully immunised district, vaccination programme perhaps got less priority. Without developing a system that ensures no child misses vaccines, this type of outbreaks won’t stop, according to them.

“Only declaring fully immunised districts without ensuring its sustainability creates a false sense of security,” said Upreti, the child health expert. “Full immunisation never happens, as babies are born throughout the year and authorities concerned must ensure there’s a mechanism to get all children enrolled for vaccination.”

The World Health Organisation and UNICEF in 2022 had warned of a perfect storm of conditions for measles outbreaks in many countries.

Doctors say people of all age groups are vulnerable. Underage children, pregnant women, elderly people and those with weak immunity such as HIV-infected people are highly vulnerable.

Early measles symptoms, which usually appear 10-12 days after infection, include high fever, runny nose, bloodshot eyes and white tiny spots inside the mouth. Several days later, a rash develops on the face, upper neck and other parts of the body.

Some people may suffer from severe complications, such as pneumonia and encephalitis, and these diseases may also lead to death.

Measles was endemic in Nepal and an average of 90,000 cases were recorded every year from 1994 to 2004. Routine measles vaccination began in the country in 1979, starting with three districts. The campaign was extended nationwide after 10 years. Still, measles continues to stalk children across the country.