Department of Hydrology and Meteorology says 55 to 60 percent more rainfall likely in some places of the country. woman holds her baby under an umbrella as it rains at Mangalbazar in Lalitpur on Sunday. Elite Joshi/TKP

As an early and heavier-than-usual monsoon has been forecast this year, provincial and local governments have been advised to start preparations accordingly. 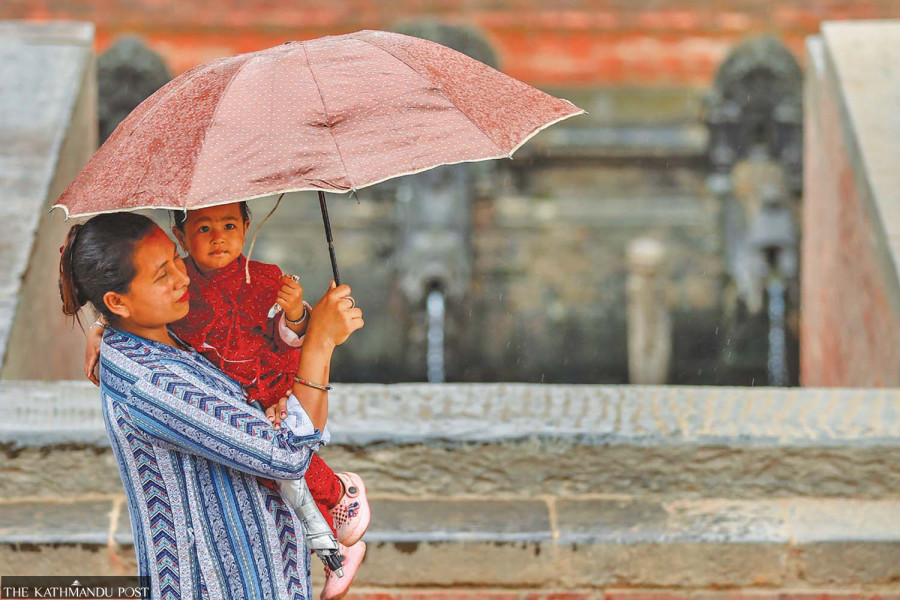 The National Disaster Risk Reduction and Management Authority, the agency responsible for disaster risk reduction and management, said it has asked the provincial and local authorities to prepare their own action plans on the basis of risk assessment and jump into action in the event of disasters.

“We have alerted agencies under provincial and local level governments about the risks and advised them to prepare for the worst,” said Dijan Bhattarai, spokesperson for National Disaster Risk Reduction and Management Authority.

It has been assessed that disaster incidents will not be less this year compared to last year. Last year, the disaster management authority had estimated that over 1.8 million people would be affected by monsoon-related disasters like flooding and inundation, embankment breaches and mudslides—1,687,480 people by floods and another 117,217 by landslides. Other monsoon hazards include thunder strikes, snakebites and water-borne diseases.

Hundreds of people had died and thousands were displaced in rain-related incidents last year. According to the data of the Ministry of Home Affairs, between June and 27 October 2021, 673 people lost their lives, 69 were missing and 181 were injured in water-induced disaster incidents. In October alone, at least 101 people died and several were unaccounted for after an unseasonal and heavy rainfall.

As per the seasonal forecast by the Department of Hydrology and Meteorology, this year, 55 to 60 percent more rainfall is likely in some places of the country.

“More rainfall within a short span means more incidents of floods and landslides,” said Indira Kandel, senior meteorologist at the Climatic Analysis Section under the Department of Hydrology and Meteorology. “We have unveiled our seasonal forecast report in the presence of secretaries of various ministries. Seasonal forecast report not only says what could happen but is also helpful in alerting relevant agencies to start preparations.”

The National Disaster Risk Reduction and Management Authority itself has also prepared the National Monsoon Early Preparedness and Response Work Plan- 2022 to deal with disaster incidents.

Bhattarai, the spokesperson for the authority, said his office has asked the provincial and local level governments to prepare their own action plans based on local risk assessment.

“Each and every agency—Army, Police, Armed Police Force, non-governmental organisations, and agencies under ministries, have their own responsibilities,” said Bhattarai. “Those agencies should act proactively during disasters.”

Mainly, agencies under ten ministries including the Ministry of Home Affairs, Ministry of Health and Population, Ministry of Urban Development, and Ministry of Water Supply are involved in disaster response. UN agencies also play a major role by providing aid and assistance. Officials say that they have also instructed officials to keep relief logistics ready in all seven provincial stores.

The Authority has also carried out an analysis of the events of last year’s disaster incidents. Officials hope that the findings of the analysis will be helpful to deal with new challenges.

Every year, floods and landslides cause huge loss of life and property, but the country’s disaster preparedness has not been well organised. In the past few years, the country has been receiving more rainfall in short durations–an abnormal phenomenon that is slowly becoming a new normal.

Experts say changes in rainfall patterns, which have become severe and erratic in the past few years as an impact of climate change, have contributed to extreme weather events like floods and landslides annually.