SOFT POWER: China, the United States and Japan are rebuilding sections of Kathmandu Palace Complex with some outsized signs proclaiming their assistance.

When the Mallas ruled the kingdoms within the Valley of Kathmandu, they were constantly trying to outdo each other to build ever more impressive monuments. Many of these structures in Bhaktapur, Patan and Kathmandu were destroyed in the 2015 earthquakes 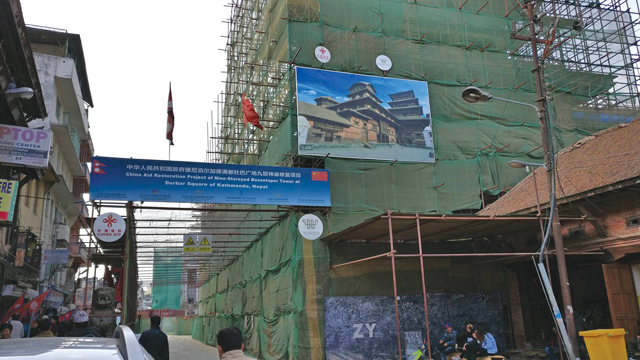 Today, the competition to rebuild the temples is not among the descendants of the Malla kings, but between rival world powers.   Visitors to the Kathmandu’s historic palace complex these days  have to pass under an elaborate gate festooned with Chinese flags announcing the restoration of the Hanuman Dhoka Palace.

Further on, hanging from the scaffolding of the damaged Gaddi Baithak are outsized signs adorned with the American star spangled banner. At the entrance to the palace courtyard amidst structures propped up with timber beams, is a relatively smaller billboard with the Japanese flag detailing Japan’s assistance in restoration work.

The imposing Nautale Darbar which was built after the Shahs conquered Kathmandu in 1769 used to dominate the complex, and lost its top four floors in the earthquake. This nine-storey brick and timber structure and three other smaller towers surrounding Lohan Chowk, are being rebuilt by the Chinese government. 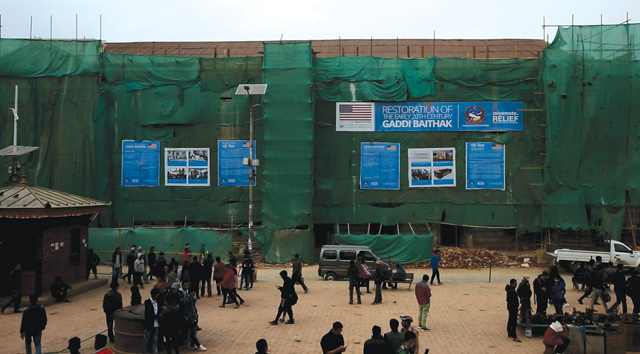 Beside its pompous welcome gate at the entrance to the palace complex, the Chinese have also put up exhibits explaining to the public details of its reconstruction work.

This has irked other countries which are also involved in restoration. Said one diplomatic source: “The gate and posters give the impression that China is rebuilding the whole palace. It is a bit in-your-face.”

Not to be outdone by the overt Chinese display of its generosity, the Americans have also covered both sides of their Gaddi Baithak restoration with huge banners. The European-style neoclassical building suffered heavy damage, and is being rebuilt with a $700,000 grant from the US Ambassador Fund for Cultural Preservation with the Miyamoto Disaster Relief Fund carrying out the restoration.

Japan is mainly restoring the Agam Chen and Hanuman Gate, and appears to be far behind the other two donors in taking credit for its restoration project.  Heritage experts say Nepal has always rebuilt its monuments after earthquakes that have struck Kathmandu Valley every century or so. When it comes to donor offer of support, it seems modern Nepal just cannot say a polite ‘No, thank you we can do this ourselves’.

A larger worry is that after giving the permission for restoration, the Department of Archeology (DoA) has taken a back seat in ensuring that the projects comply with heritage reconstruction guidelines. 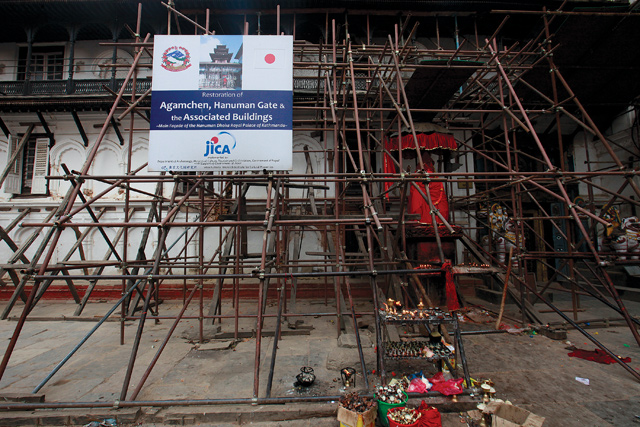 In 1979, the architecture firm of John Sanday used steel beams instead of traditional timber in renovating the Nautale Darbar to strengthen the structure, but the palace collapsed anyway in 2015. Some architects reckon the building may have withstood the 7.8 magnitude shaking if traditional timber joints were used, giving it more flexibility.

Architect and historian Sudarshan Raj Tiwari visited the Nautale Darbar recently, and says the Chinese were about to repeat the mistake of using steel columns. He says the Chinese assured him they would henceforth use traditional materials.

Tiwari is a purist when it comes to heritage restoration, and has led high-profile activism against the use of cement and steel in the renovation of Rani Pokhari and Kasthamandap. He does not approve of the DoA’s heritage reconstruction guidelines that allow the use of modern material if traditional materials are not available.

“The DoA has not even bothered to check if its own problematic guidelines are being followed,” Tiwari told us. “They just sign MoUs with donors and go to sleep.”  In its defence, the DoA says it is indeed monitoring the heritage reconstruction guidelines through its site office at the Hanuman Dhoka Darbar Museum Development Committee.

However, when we asked heritage officer Jaya Narayan Karki at the Committee this week, he revealed he had no mandate to inspect reconstruction. 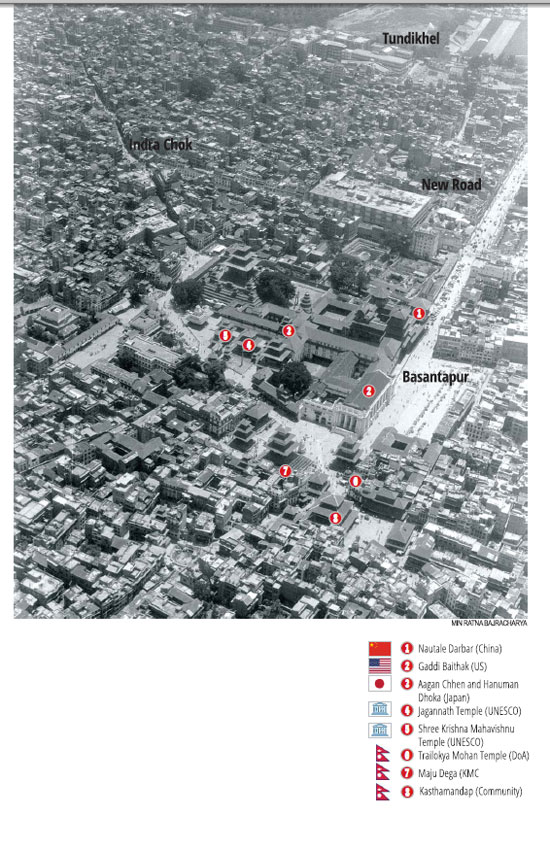 “We sometimes try to intervene because it is happening in front of our own eyes, but the DoA has not officially asked us to monitor if the Chinese or Americans are following our guidelines,” Karki said.

Heritage conservation activists say it would have been ideal for Nepal to rebuild all its monuments itself like it has done in the past, or like Bhaktapur is doing (see report below). If help was needed, the government should have sought support on condition that the projects were channeled through the DoA and ensured participation of local communities.

The DoA has been reduced to a rubber stamp body and local communities say they do not have a say in the rebuilding process, and don’t know what the foreigners are doing to monuments built by their ancestors.   There have been no public hearings, and there is no local coordination committee. The only information locals get are from the display panels and banners put up by the Chinese and the Americans, with no way to verify if that is how restoration is being carried out.   Architect Alina Tamrakar says: “Local communities might not have a sense of ownership of the buildings if they are excluded from the heritage conservation and reconstruction process.”