The government has suffered a revenue shortfall of Rs70 billion, 28 percent below the target for the first quarter of the current fiscal year, a result of both a slump in imports and the government’s failure to raise adequate revenue through domestic economic activities. 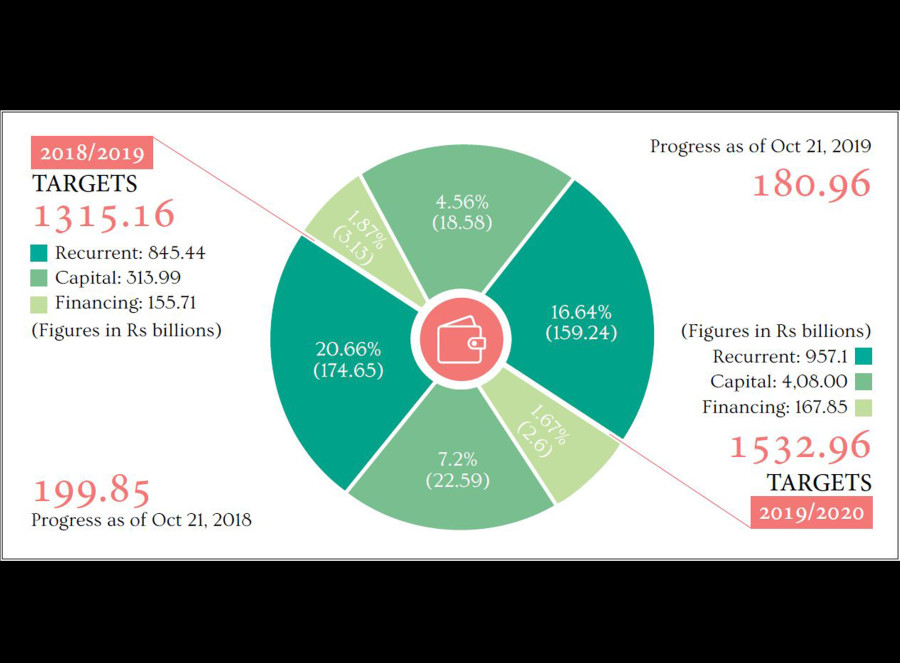 According to the Financial Comptroller General Office, the constitutional body that keeps records of the government’s income and expenditures, revenue collection during the first three months of the current fiscal stood at Rs182.7 billion. The revenue target set for the same period was Rs252 billion, according to the Finance Ministry, which means the gap is around Rs70 billion. The target for the entire fiscal year stands at Rs1.11 trillion.

Key government agencies responsible for revenue collection—the Department of Customs and the Inland Revenue Department—both reported a significant deficit in numbers. The customs office was given a target of Rs132 billion but officials only collected Rs93 billion during the first quarter of this fiscal year. According to the Inland Revenue Department, revenue collection stood at Rs80.60 billion against the target of Rs 92.70 billion.

Government officials have defended the numbers, saying that the situation is not bad compared to the average 20 percent growth in the past few years, and blamed the shortfall on the ambitious annual growth target of 35 percent.

“No new taxes have been introduced in this period,” said Chandi Prasad Ghimire, undersecretary at the revenue division of the Finance Ministry. “And the import of major revenue-generating items such as petroleum products, gold and construction materials has decreased, affecting the total revenue collection.”

During the first two months of the current fiscal year, overall imports declined by 1.2 percent, caused by a slump in the import of goods like fuel, gold, silver, cement clinkers, aircraft parts and polythene granules, according to the Trade and Export Promotion Centre. The government also prohibited some imports, including products like the energy drink Red Bull.

The import of vehicles, one of the leading contributors to revenue, grew by just 7.8 percent, according to the centre.

Other officials say the availability of electricity and self-reliance on certain products like cement contributed to the decline in the import of related products, calling the phenomenon positive for the economy.

But if this is the case, trade experts are wondering why it hasn’t reflected in revenue collection from domestic economic activities, on which the Inland Revenue Department’s collection is based. Even the department witnessed a shortfall in revenue by Rs12 billion.

“I think the government has not been able to ensure tax compliance from taxpayers,” said former finance secretary Shanta Raj Subedi.

According to Subedi, even though the government introduced programmes like mandatory Permanent Account Number for all citizens, the failure to collect taxes adequately has resulted in lower revenue collection.

For Bidhyadhar Mallik, a former minister, decreased domestic consumption might also be a factor behind the failure to collect adequate revenue domestically, to fill the revenue gap from the reduced imports.

Both Mallik and Subedi believe that if the slump in revenue collection continues, it could constrain the government’s ability to finance development projects. The government allocates budgetary resources for administrative and development activities based on revenue estimates, along with foreign aid and domestic loans.

“Right now, we are not experiencing an impact of the revenue deficit on financing development activities due to the government’s failure to spend its capital budget,” said Subedi. “When such expenditure accelerates, the government will find it difficult to generate resources to finance projects because spending for administrative purposes cannot be reduced.”

If revenue collection remains dismal, the government will be forced to take domestic loans as early as possible, meaning it will face the burden of paying more interest.

Experts have also questioned the government’s tendency to set over-ambitious targets for revenue, despite failing to meet targets last fiscal year too.

“Being ambitious is necessary to motivate the bureaucracy,” said Mallik. “But setting an overambitious target will lead to unrealistic budget allocations and development projects may struggle to get the committed resources.”