KATHMANDU: The incessant rain during the last couple of days has caused agricultural losses in Province 1 amounting to around Rs 815.47 million, according to a preliminary report prepared by the Ministry of Agriculture and Livestock Development. 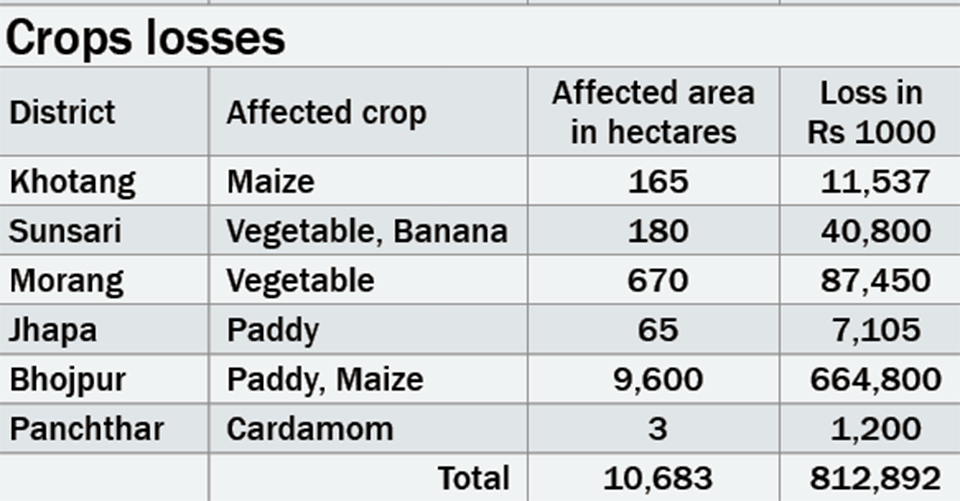 The rains have caused floods and landslides across the country. The report includes losses to crops caused by the delayed monsoon in the hill districts of Bhojpur and Khotang in the province.
A total of 2,446 households have incurred losses to crops and livestock. The losses have been caused by landslides, floods and drought during the current fiscal year 2018/19.

Landslides in Khotang district have claimed three lives whereas details from other districts are yet to be compiled. A total of 4,326 head of livestock were lost and 10,682.50 hectares of land affected, mainly by floods and landslides. the highest number of cows, pigs, goats and chicken, worth about Rs 1 million, were lost to landslides.

According to the loss assessment, landslides and floods damaged 165 hectares of land and caused losses of Rs 11.53 million in Khotang district, Rs 40.8 million in Sunsari, Rs 87.45 million in Morang, Rs 7.10 million in Jhapa and 1.2 million in Panchthar.

The province has seen the impact on crops like maize, vegetables, paddy and cardamom and livestock like chicken, cows, pigs and goats.

Reports from provinces 2, 3 and 5 and Gandaki are yet to be received by the ministry.
Karnali and Sudur Pashchim provinces have so far not been badly affected by the monsoon.