Agro losses due to tornado estimated at half billion rupees

KATHMANDU: The tornado, which hit two Tarai districts on March 31, caused Rs 508 million worth of crop and livestock loss, according to preliminary government assessment. 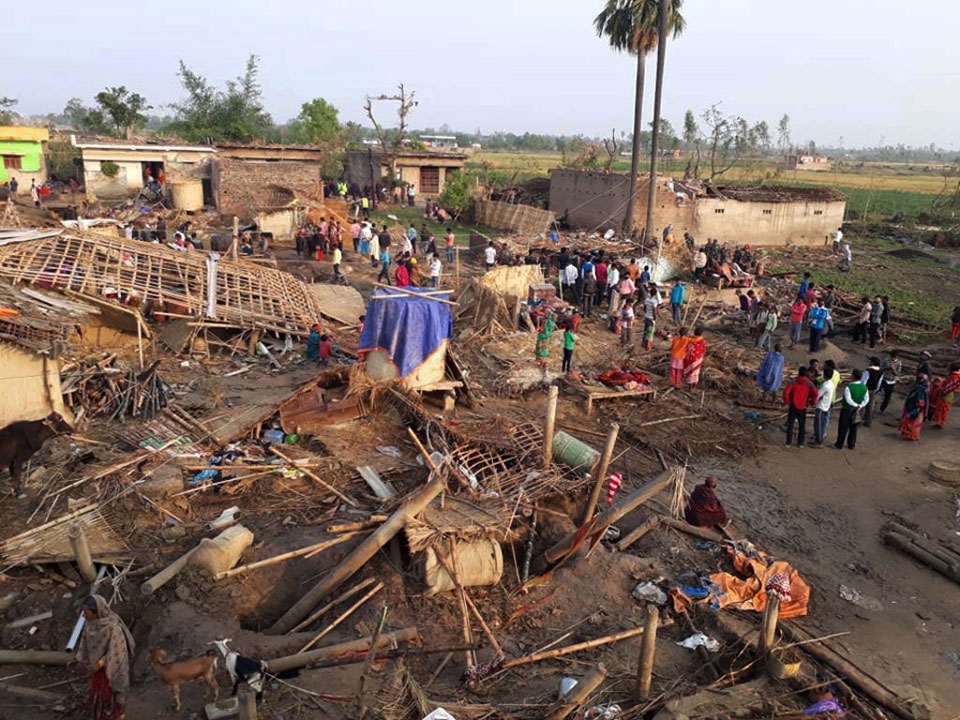 Initial Rapid Assessment carried out by the Ministry of Agricultural and Livestock Development shows that the tornado caused loss of Rs 507.93 million to farmers of Bara and Parsa districts.

The rapid assessment puts the estimate of crop losses in monetary value at Rs 500.35 million.

Similarly, the tornado claimed 10,494 livestock and injured 296 others. According to the rapid assessment, 114 goats were killed while 182 were injured. Similarly, it claimed 44 cattle (14 cows and 30 buffaloes), while injuring another 114 cattle (29 cows, 73 buffaloes and 12 calves). The rapid assessment also recorded death of 10,000 chickens and 326 ducks. With these livestock damages, the ministry estimates the financial losses of Rs 7.58 million. Ganga Acharya, an undersecretary at the ministry, told Republica that a five-member team from the ministry along with two representatives from Food and Agricultural Organization carried out the rapid assessment. He said that the Agriculture Knowledge Center, a local government body in agriculture sector, collected information and data from their technicians deputed in local units.“Technicians deputed in local units collected the data by making a field visit to the affected areas. They estimated the nature and extent of the damages in consultation with the victims,” read a statement issued by the ministry. “The knowledge center consolidated the information and data, validated the information by visiting the affected areas, and conducted interaction with the local government representatives,” the statement added.

The rapid assessment has also concluded that there was a need to distribute two metal bins for each household affected by the tornado. According to the ministry, nearly 5,500 storage bins of two-quintal capacity are needed immediately for those households.

“The provincial government can distribute these metal bins which are urgent not only to store food grains that the affected families have received in relief, but also to keep seeds safely if distributed later," said Acharya, who is also a senior agro-economist, at the ministry. “If asked or needed, the federal government can help in supply of such metal bins,” he added.

The procedural formality in transferring budget is causing delay to distribute relief package to tornado-hit farmers. “As disaster fund has not been allocated in the budget, the provincial government has to transfer the budget heading first to provide relief package to farmers. This has caused the delay,” said a source at the ministry.