With Malaysia and Japan opening up to Nepali workers, the current stock of passports is likely to last only six months, officials say.

With the country’s stock of passports fast depleting, the government is looking at an administrative crisis that could derail the plans of thousands of migrant workers, students and travellers in coming months. 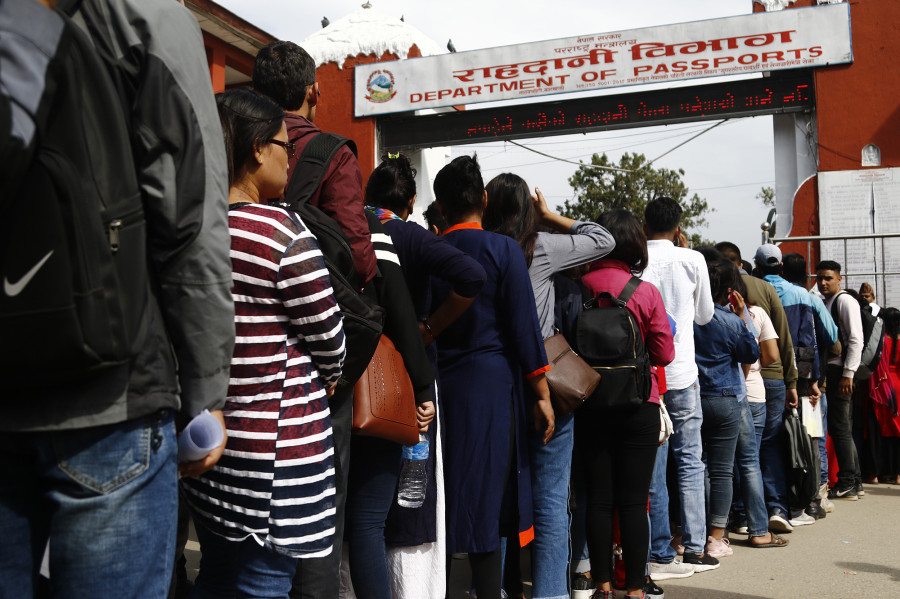 Officials at the Department of Passports say they only have 750,000 passports in stock, which could barely last six months. Among the three passport categories—diplomatic, official and ordinary—the department will soon be running low on official passports as two battalions of Nepali personnel are gearing up for peacekeeping operations abroad, according to two officials at the department.

“If a credible alternative is not found immediately, there will be a serious crisis because the passport demand will likely surge after Japan and Malaysia open their doors for foreign employment,” an official at the department told the Post on condition of anonymity. Japan has announced that it will be accepting nearly 350,000 workers from nine countries, including Nepal, over the next five years, while Malaysia will be taking in around 100,000 workers.

Once these two lucrative destinations open for foreign employment, the present stock will not go beyond May, according to the department’s calculations. As with South Korea, Japan requires a passport to apply for the language test before applying for a work permit. The Department of Passports currently issues around 1,500 passports every day.

“Though we believe that the stock of passports will last a year and a half, it will not go beyond six months if foreign employment opens in Malaysia and Japan because people will be applying for passport renewals as well,” another official at the department told the Post.

Recently, around 42,000 passports were issued through the passport department in Kathmandu in just 23 working days after the US opened its Diversity Visa lottery, which now requires a passport number. This number does not include the passports that were issued from outside Kathmandu.

After cancelling the global tender for e-passports, the government decided to procure e-passports from the firm that will be setting up a security printing press in the country.

The government is transitioning from machine-readable passports to biometric passports, as per the instructions of the International Civil Aviation Organisation. But with the cancellation of the e-passport bidding process, officials at the department say the country could soon face a shortage of passports.

The government has now instructed the Security Printing Division at the Ministry of Communication and Information Technology to hold negotiations with IN Groupe of France on the terms and conditions to set up a dedicated printing press in the country.

As the government cancelled an e-passport bid, hours before the tender submission deadline, it is now mulling a government-to-government deal to set up security printing facilities on a loan.

At least five separate complaints have already been registered with the parliamentary Public Accounts Committee against the government’s bid to procure a security printing press under a government-to-government deal, according to Rojnath Pandey, secretary at the committee.

One of the complaints registered with the parliamentary committee, according to a Nepali Congress lawmaker who saw the complaint and described the contents of it to the Post, says the government-to-government deal does not fit Nepal’s requirements. The lawmaker also said the agreement is a source of corruption and that the project will turn into a white elephant because of high-interest rates and a lack of adequate business.

Ram Sharan Mahat, a Congress leader and former finance minister, said the government bid went against established norms and practices not to take loans for such expensive projects.

“The government should go for a competitive bidding process for any procurement. It is corruption if a government-to-government deal is being considered to set up the security printing press with high-interest loans,” Mahat told the Post.

Officials say the department is left with two options.

“First, continue with the present contract with Oberthur Technologies to supply machine-readable passports until e-passports are delivered by the firm with which the government is considering a deal,” said the official at the passport department. “Second, bring passports from the firm that will get the task of setting up the security printing facilities for which negotiations are yet to begin.”

An official at Oberthur Technologies, however, told the Post it won’t be easy to continue with the present contract due to technological constraints and the small timeframe.

After the 2015 earthquakes, the government had extended the contract with Oberthur to provide two million passports, citing an emergency. Of those supplied, over 1.22 million passports have already been distributed.

According to Mahat, establishing a security printing press is also a lengthy process.