The growth rate in the country's economic powerhouse is likely to sink to 1.23 percent from last year's heady 6.4 percent. 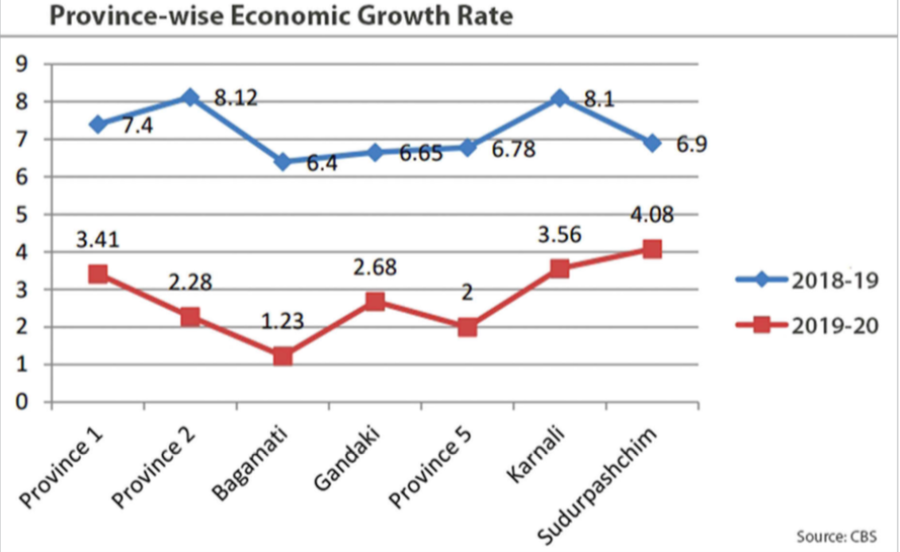 Economic loss figures for Bagmati Province from the virus lockdown are the highest among the seven provinces owing to the concentration of the nation's trade and industry here.

Revenue producing activities, ranging from wholesale and retail to tourism and transportation, all came to a screeching halt after March-end, and the province's growth rate is expected to plunge to 1.23 percent from last year's heady 6.4 percent, the Central Bureau of Statistics said on Tuesday.

The coronavirus pandemic has resulted in widespread business bankruptcies and job losses, and financial strain has been felt most severely in Bagmati while other states have agriculture to fall back upon, said Ganesh Prasad Acharya, director of the Central Bureau of Statistics.

According to the province-wise gross domestic product (GDP) growth estimates released by the Central Bureau of Statistics on Tuesday, Sudurpashchim Province is likely to see the highest growth rate of 4.2 percent this fiscal year, but it is still a steep drop from last year's 6.9 percent.

“All economic activities, from hotels to airlines and from retail to transportation, have come to a virtual standstill since March-end in Bagmati Province where Kathmandu Valley is situated,” said Acharya.

The slowdown is the result of restrictions on domestic and international travel and the impact on the hotel and restaurant sector, the bureau said.

The Central Bureau of Statistics recently revised the growth of Nepal’s economy for this fiscal year to 2.27 percent, a sharp drop from the 8.5 percent targeted by the government.

A 2.27 percent growth translates into a gross domestic product of about Rs3.76 trillion. This will mark the slowest pace of economic expansion in four years.

The bureau warned that the outlook could be bleaker if the lockdown is extended beyond mid-June, and international travel restrictions are not lifted globally.

The economic growth rate of Province 1 has been expected to slow to 3.41 percent from 7.40 percent in the last fiscal year. The province's total contribution to the economy is valued at Rs596 billion, or 15.73 percent of the GDP. Its major income sources are agriculture, forestry and fisheries.

The growth rate of Province 2 is expected to plunge to 2.28 percent this fiscal year from 8.12 percent in the last fiscal year. The total contribution of Province 2 to the national GDP is Rs519 billion, or 13.62 percent. More than 40 percent of its income comes from farming.

The growth rate of Gandaki Province is estimated to drop from last year's 6.65 percent to 2.68 percent. The state's contribution to the country's economic output is expected to reach Rs335 billion, or 8.90 percent of the total, this fiscal year.

Province 5 is expected to grow at a rate of 2 percent this fiscal year compared to 6.78 percent in the last fiscal year. According to the Central Bureau of Statistics, the contribution of Province 5 to the national GDP is likely to amount to Rs534 billion, or 14.18 percent.

Karnali Province is projected to achieve a growth rate of 3.58 percent this fiscal year compared to last year's 8.10 percent. The total output of Karnali Province is expected to reach Rs161 billion or 4.27 percent of the national GDP.

The economy of Sudurpashchim Province is expected to grow at a rate of 4.08 percent this fiscal, down from 6.90 percent in the last fiscal year. Its economic output is projected to amount to Rs272 billion, or 7.21 percent of the national total.