The province will be self-sufficient in fish production in two years, officials say.

The Bagmati provincial government allocated a Rs150 million budget for the Large Fisheries Development Programme for the current fiscal year in a bid to make the province self-sufficient in fish production. 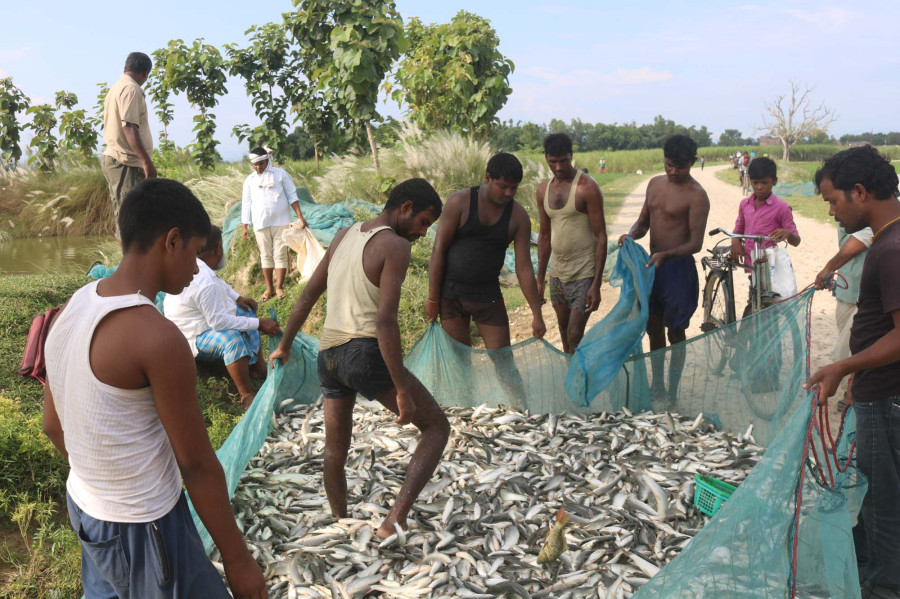 Integrated Agriculture Forest Development of Madi Municipality-9, Chitwan will get a Rs10.4 million grant from the Directorate of Livestock and Fisheries Development, Hetauda.

The farm has been growing fish in 30 ponds built on 10 hectares of land for the past four decades. It also sells fingerlings to farmers, said Suresh Prasai, head of the firm.

He plans to expand his fish farm with the grant provided by the government this year. He has started building another 25 ponds on his farm which will be spread over 30 hectares of land and contain 55 ponds.

As per provincial government regulations, it will provide a Rs400,000 grant to farmers raising fish on farms spread over 1 hectare of land. It will also provide a Rs80,000 grant to install deep bore wells and buy equipment.

According to Bablu Thakur, spokesperson for the Directorate of Livestock and Fisheries Development, grants totalling Rs70 million will be issued to 49 fish raisers in Makwanpur, Sindhuli, Ramechhap and Chitwan districts which are considered to be suitable places for fish farming.

The farmers are raising fish in ponds built on 140 hectares of land. The government grants are equivalent to 50 percent of the investment they have made on their farms.

The Rs80 million funding earmarked for rainbow trout raisers will be given to 40 farmers in Nuwakot, Dolakha, Kabhre, Sindhupalchok, Rasuwa, Lalitpur and Makwanpur districts. Thakur said that the government grants would be issued at the rate of Rs1.2 million for each ropani of fish farm for the construction of raceways.

The government is also spending Rs750,000 for the production of fish feed and Rs500,000 to build a hatchery. The directorate said that if the government grants were utilised well, fish production would increase sharply.

According to the directorate, the annual requirement of fish in Bagmati amounts to 22,000 tonnes. The province produces 13,870 tonnes and imports the rest from India. The Ministry of Agriculture and Livestock Development claimed that the province would be self-sufficient in fish production in two years.