The cabbage harvest season has started in the hills of Sankhuwasabha, Tehrathum and Dhankuta. 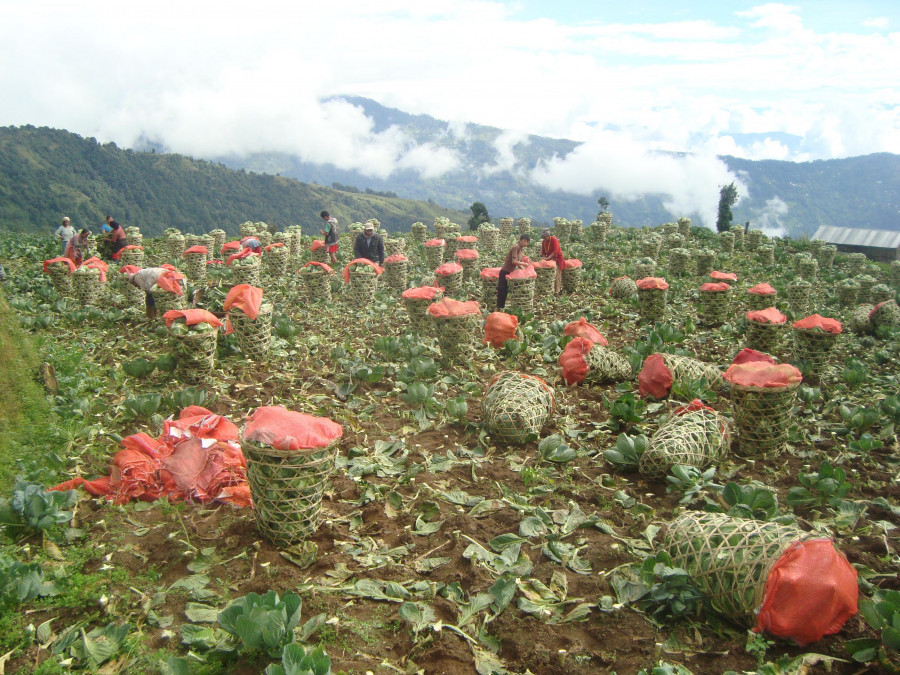 Nepal's eastern hill districts have been exporting cabbage in the thousands of tonnes to India as demand for organic vegetables sees a steep rise. The cabbage harvest season has started in the hills of Sankhuwasabha, Tehrathum and Dhankuta.

The Koshi Corridor is a large producer of green and fresh vegetables as the crops are mostly grown naturally. The value of the cabbage exported to India annually stands at around Rs500 million. At this time of the year, the landscape of the eastern hills are covered with cabbage, and agro tourism is also becoming popular in these districts.

Laxman Bhattarai, manager of the Agricultural Commodity Market Management Committee, Dharan, said that cabbage was the most sought-after vegetable crop among Indian buyers.

But all exports are not done in a legal way, some traders involved in the business for a long time said. Farmers have been earning millions of rupees by producing organic vegetables in the hills which is directly benefiting the country, but most of the exports are not made through legal channels, they say.

Cabbage is shipped to the Indian market in two ways, Bhattarai said. According to legal export practice, cabbage is collected from farmers in the Agriculture Commodity Market and shipped by Nepali and Indian traders after paying customs duty. But there are hordes of farmers and traders who are exporting directly to the Indian market.

According to Bhattarai, an average of 13,000 tonnes of cabbage is collected annually from farmers in the Koshi Corridor and reaches consumers through wholesalers and retailers. "Out of the 13,000 tonnes, 50 percent is consumed in the local market and the rest is exported to India," he said.

Illegal export of cabbage is very high, said Bhattarai. There are fresh statistics on the volume of cabbage production in the Koshi Corridor. Due to the weather factor and fertile land, farmers in the eastern hill districts do not use much chemical fertiliser and pesticides to grow vegetables in a commercial way.

Because cabbage is mostly produced in an organic way, its demand has been growing in the Indian market. Traders say that the bulk of the cabbage harvest goes to Kolkata, India.

Migendra Gurung, a leading farmer and largest cabbage exporter from Sindhuwa in Dhankuta, said that there was high demand for Nepal's cabbage in the Indian market. “At this time, the fields in the entire Tarai are covered with paddy.” Gurung said they don’t take their crops to the market and sell them directly in India.

Gurung said he sold cabbage worth Rs380 million in Siliguri in the Indian state of West Bengal. “That’s the sale of a single season,” said Gurung. "The government has taken no initiative to export cabbage. It can be a million-dollar exportable commodity if it is promoted," he said.

Cabbage has been listed among the fruits and vegetables of Nepal that can be exported to India. But farmers like Gurung said that the Nepal government was not keen in promoting them. The government has a list of high-value crops which are given preferential treatment for production and export, but the high potential of cabbage is not realised, according to farmers.

Farmers said that when exports are sometimes halted, traders and local farmers who produce large quantities of cabbage have become rich by calling quarantine experts from India to make site visits.