With just one month remaining before its extended tenure expires, the Commission of Investigation on Enforced Disappeared Persons has completed the first-phase of detailed investigation into 85 per cent of the complaints. 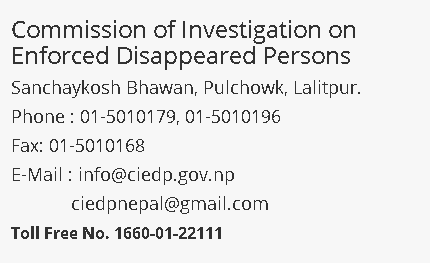 In the first phase of the detailed probe, evidence and testimonies are collected from victims and reparation and ante-mortem data forms are filled. In the second phase, statements of alleged perpetrators are collected.

Since there are no complaints filed from Manang and Mustang, only 11 districts remain to be covered. The CIEDP now plans to begin the second phase of detailed investigation and continue the first-phase probe in the remaining districts simultaneously.

The committees are holding consultations with stakeholders concerned and experts and will reach a conclusion in their respective areas by January 24, according to Pathak.

As far as recording statements from alleged perpetrators is concerned, the CIEDP has categorised them into four categories — policymakers, those issuing orders, supervisors and executors — based on the complaints. “We are now studying whether to start from policymakers or executors or others,” said Pathak.

However, since the CIEDP has only around a month left of its tenure, Pathak said they would continue their work till the last day. “If the government decides not to extend our tenure, we will submit a short note to the government requesting it to protect the evidences we’ve collected,” he said.

Pathak also said it would be better if the government decided their fate soon, especially as a section of conflict victims, backed by a section of rights activists, have demanded restructuring of the two commissions — CIEDP and Truth and Reconciliation Commission — and formation of a high-level mechanism to oversee the transitional justice process.

The government has to amend the Enforced Disappearances Enquiry, Truth and Reconciliation Commission Act 2014 to extend the tenure or to restructure these two mechanisms.