The citrus industry in Gulmi, Arghakhanchi and Myagdi districts generated more than Rs770 million in economic activity this year. The orange harvest in Gulmi and Arghakhanchi was worth Rs550.5 million while Myagdi produced oranges valued at Rs220.1 million. 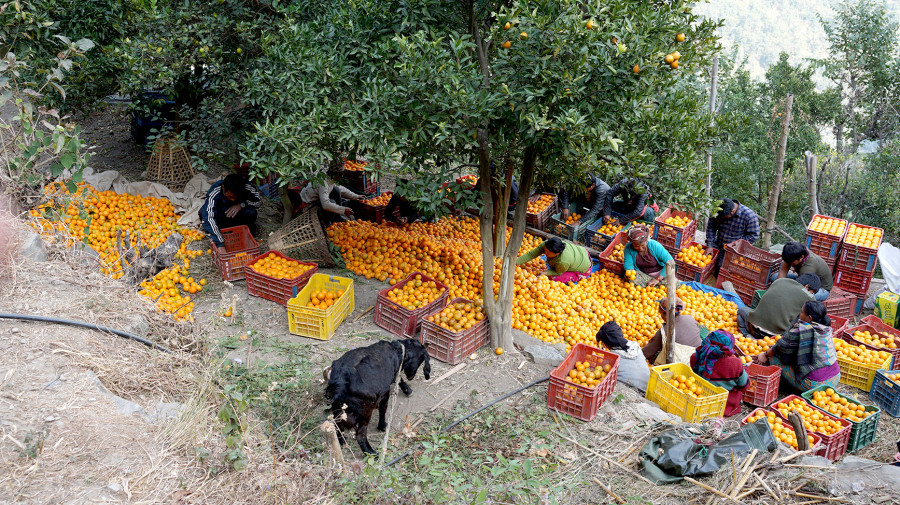 Orange production and sales have soared in these districts in central Nepal with more farmers becoming engaged in commercial production, said officials of the Agriculture Knowledge Centre.

Farmers grew 7,774 tonnes of oranges worth Rs380.7 million on 1,372 hectares of land, according to the Agriculture Knowledge Centre, Gulmi.

The district earned Rs250.8 million from its orange crop last year by selling the fruits at Rs40 per kg. This year the price has increased to Rs50 per kg.

Dhurkot rural municipality in Gulmi was the largest producer of oranges followed by Chatrakot and Resunga, said Buddhi Raj Ghimire, head of the centre. Oranges are grown at Gulmi Durbar, Ruruchettra, Kaligandaki, Madane and some villages in Chandrakot, he said.

Orange saplings are planted annually which start bearing fruit after four years. Many farmers are switching to orange growing because of the good returns, and this has pushed up output, Ghimire said. A cold store has been established at Dhurkot too.

All 12 local units in the district have land suitable for growing oranges. Production has increased due to garden strengthening, use of chemical fertiliser and lack of hail and storms. “Farmers welcome the coordination of the local government to develop the district as an orange production area,” he said.

"With revenues from orange farms rising, different projects are being operated especially for youths who were planning to go for foreign employment," said Bhupal Pokhrel, mayor of Dhurkot rural municipality.

A nursery has been established to produce 30,000 saplings in the current fiscal year. Having orange trees is like having a retirement fund as they provide a good income every year.

Traders paid the farmers Rs40 per kg for their orange crop. Last year, they had received Rs50 per kg. One-fifth of the output came from new plants this year.

Padini, Simle produced 70 percent of the oranges grown in the district. The fruits grown here are sweet and tasty, for which reason they fetch a high price, said Mishra.

Local farmers have turned entirely to orange farming by leaving all other crops. Traders from Butwal book the harvest even before the fruits start ripening. Most farmers are doing commercial orange farming in association with farmers' groups. The centre is running a special programme to increase orange production, he said.

Khan, Khandaha and Hangshapur are large orange producers. Basanta Shreesh, an orange farmer, said he increased his income threefold by growing the fruit. “I earn Rs120,000 annually from my orange crop, and I plan to engage totally in commercial orange farming,” he said.

According to the Orange Zone Office under the Prime Minister Agriculture Modernisation Project, the 43,652 orange trees belonging to 172 agriculture cooperatives, groups and private farms in Myagdi produced 3,690 tonnes of the fruit.

Farmers in the rural municipalities of Annapurna, Raghuganga, Mangala and Malika grow oranges. They ship their produce to wholesale markets in Pokhara, Kathmandu and other large cities. Commercial orange farming in the villages received a boost after being connected to the road network.

Access to new markets has drawn other farmers to take up orange farming, said Khim Bahadur Pun, president of the Orange Zone Operation Committee. The orange acreage is expected to expand by 15 hectares next year.

According to the zone office, Beni produced 1,411 tonnes of oranges this year. The community built a gravel road by taking a loan which proved to be a good move. Farmer incomes have increased as the road has allowed them to ship their orange and other harvests to market.

Farmers in the district grew 3,600 tonnes of oranges on 3,777 hectares last year. The local environment is favorable for orange production, and the centre has been working to help farmers go into commercial production by bringing training, grants and saplings to their doorsteps besides conducting periodic examinations for plant diseases, said Rupa BK, deputy manager of the zone office.