Nepal produced 530 tonnes of coffee in the last fiscal year, according to the National Tea and Coffee Development Board.

Kathmandu, Coffee farmers say they have no complaints about the reduction in the minimum support price for this year, but they want the government to formulate policy to increase production to benefit from rising market demand. 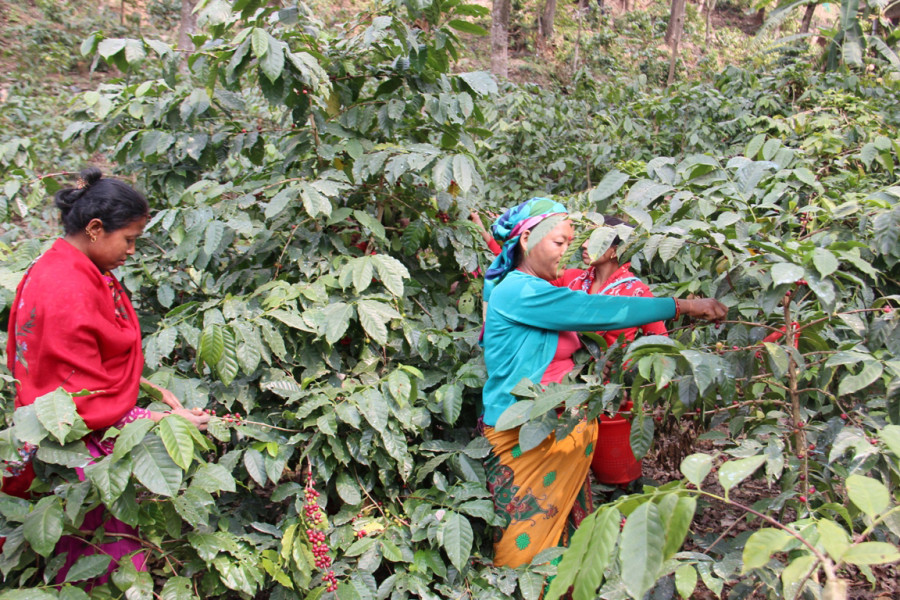 Coffee can be one of the key foreign currency earning commodities if commercial farming is adopted, they say.

The National Tea and Coffee Development Board fixes the floor price annually to ensure that farmers get a reasonable rate for their crop and are not exploited by middlemen in the supply chain.

The price is fixed as per international market trends and the quality of the coffee. According to the board, the price of fresh cherry A grade coffee remains unchanged at Rs85 per kg. This A grade coffee needs to be certified as organic.

The price of B grade coffee has been decreased by Rs5 to Rs75 per kg. B grade fresh cherry does not require organic certification.

Coffee cherries turn into a bright and deep red colour when they ripen and become ready for harvesting. The dried beans are known as parchment coffee.

Dhakeswor Ghimire owns a coffee farm in Palpa and is the proprietor of the Nepal Organic Coffee Products. The minimum support price encourages farmers to increase coffee production, he said. The government has been according priority to the development of the tea sector and it gets most of the budget, he added.

Ghimire started his coffee farm in Palpa in 1978 by planting 15-20 coffee plants. He now grows organic coffee on 60 hectares. “The government needs to formulate a long-term plan for the development of domestic coffee as it has huge international market potential.”

Raju Dhakal, a coffee farmer at Kavre, told the Post that the minimum support price that the government had been revising annually is a good initiative as per the need of the time. Dhakal has been producing dry cherry coffee for eight years. He said they had expected prices to increase. “It’s sad to know that prices have gone down.”

Om Nath Adhikari, president of the Nepal Coffee Producers Association, said that prices had not fluctuated much this year. He added that the price of B grade coffee had been decreased this year to encourage farmers to produce A grade coffee.

Deepak Khanal, acting executive director of the National Tea and Coffee Development Board, said that coffee prices were set according to the grading and organic certification.