The project, which is expected to cost $3.45 billion in total, is eyed by both China and India.

Eight companies from seven countries, including Nepal, are bidding for the construction of the $3.45 billion Nijgadh International Airport in Bara. 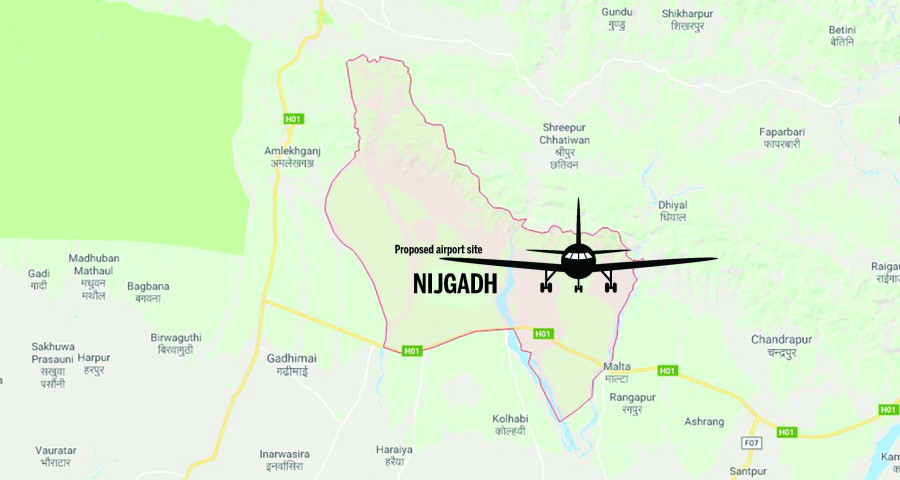 At least two officials at the Investment Board told the Post that they had received proposals from investors from China, India, Qatar, Finland, Switzerland, Malaysia and Nepal to build the airport, 175km from Kathmandu in the plains. The airport is expected to serve as an alternative to congestion and winter fog at Kathmandu’s Tribhuvan International Airport, the country’s sole aerial gateway.

GMR Group, an infrastructure company headquartered in New Delhi, India, and two airport construction firms from China have submitted proposals, sources said. One Nepali company has also submitted a proposal to develop the airport under the public-private partnership model.

The board has received a proposal also from Qatar. The Qatari government had approached Nepal in January to build the project in a bid to strengthen its presence in Southeast Asia.

The government had also mooted an option to award the project through a government-to-government deal before the 2019 Nepal Investment Summit in March.

“We have asked for proposals under the public-private partnership modality but the government has the option to build the project under any modality,” said Maha Prasad Adhikari, chief executive officer of the Investment Board.

The Malaysian and Indian governments have been eyeing the project for long. The Malaysian government, on January 6, 2016, had proposed fully-financed construction of the airport under a ‘design, finance, build, operate and transfer’ (DFBOT) model through a government-to-government deal.

In July 2015, a four-member delegation from the Airport Authority of India visited Kathmandu before heading to Nijgadh for a site inspection. The delegation had informed Nepali officials that they were ready to invest in the project, either through the private sector, government funding or both—as per the wishes of the Nepal government.

As an international airport close to the border with India would be more accessible to the large populations of the Indian states of Uttar Pradesh and Bihar, India has an interest, according to the government officials that the Indian delegation spoke to.

Adhikari told the Post that they were in the final stages of evaluating the proposals.

“The proposals will be tabled at the next board meeting headed by Prime Minister KP Sharma Oli,” said Adhikari.

After a decision is made, the Investment Board will then invite ‘requests for proposal’ from potential contractors.

Adhikari said there are a few issues in terms of financial modalities and environmental regulations that need to be addressed by the Cabinet. The government also needs to complete the pre-construction before handing over the project to foreign investors, he said.

Last week, the Investment Board held a meeting with newly appointed Tourism Minister Yogesh Bhattarai and informed him about the status of the proposals.

“The minister has asked the board to go ahead as per the plan,” said an Investment Board official on condition of anonymity as he wasn’t authorised to speak to the media. Bhattarai has informed the board that the ministry will soon schedule a meeting with the prime minister regarding the project.

Two reports about the project have been prepared so far. A detailed feasibility study conducted by the Landmark Worldwide Company of South Korea in 2011 estimated a cost of $650 million for the first phase. In 2016, the Civil Aviation Authority of Nepal estimated that the first phase of the airport could be built for $1.21 billion.

As per the Civil Aviation Authority of Nepal, it will take two years for site clearance in the first phase, and then another five years for construction. The airport will have a 3,600-metre-long and 60-metre-wide runway in its first phase.

The airport has been planned to be the largest in South Asia in terms of area, covering 8,045.79 hectares when complete. More than 2.4 million small and large trees will have to be felled to build the swanky airport, according to an environmental and social impact assessment carried out by the Tourism Ministry in February 2017. In the first phase, the project will be developed on 2,500 hectares of the total proposed area. For this, 769,691 trees will have to be cut down.