KATHMANDU: On Friday evening, six members of wedding party traveling from Dhanusha to Sindhuli were electrocuted when the bus they were traveling in touched a low-hanging high-voltage electric cable. 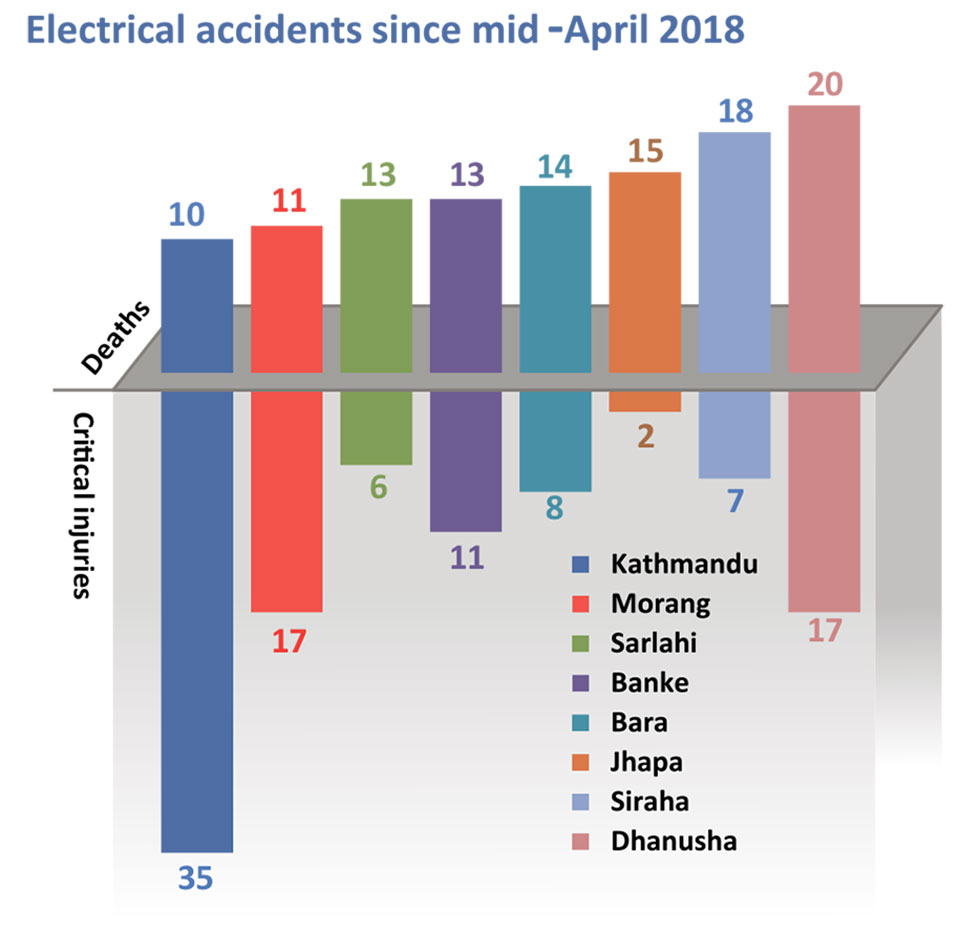 The bus (Na 5 Kha 1752) touched the 11,000-volt transmission line at Baltiya of Sabaila Municipality-4 of Dhanusha along the East-West Highway when it was en route to Baltiya-Kothiya of Dhanusha from Jitpur, Dudhauli Municipality, Sindhuli.

Friday’s incident was not the first case of electrocution that took place in Nepal this year. Since mid-April 2018, Nepal Police has recorded 518 cases of electrical accidents which killed 289 and critically injured 297 people.

Data maintained by the police show that there were 520 cases of electrocution which resulted in 321 deaths and 260 severe injuries between mid-April 2017 and mid-April 2018.

Spokesperson of the Nepal Electricity Authority (NEA), Prabal Adhikari claimed that one of the major reasons behind the increase in the electrical accidents is electricity theft mainly in the tarai. Police data show that 208 (74 percent) out of the 289 deaths that took place due to electrocution from mid-April 2018 took place in the tarai districts.

“People don’t use safety equipment such as the miniature circuit breaker (MCB) when they steal electricity from the mains,” Adhikari said. He claimed that such practice increases the risk of electrocution.

He also blamed the lack of skilled manpower for the laying of electrical lines, lack of protective equipment, and lack of awareness in the general public for the rising electrical accidents.

He claimed that the NEA is currently working to replace the old technology in its distribution system and this will bring down the number of electrical accidents. “We are currently replacing the old Aluminum-Conductor Steel-Reinforced (ACSR) cable with the safer Aerial Bundled Cable (ABC) in the rural areas in order to enhance the electrical safety.” According to him, the Dhanusha mishap would have never happened if the transmission line had the ABC.

Similarly, the NEA is all set to move the overground transmission lines in the capital underground. The authority has already published a tender notice for laying the transmission line for 90,000 customers of the NEA’s Ratnapark branch.  This pilot project is expected to be completed in two years.