KATHMANDU: The average capacity utilization of Nepali factories has reached 60% over the first six months of the current fiscal year – FY2018/19, according to the latest study of economic activities of the country released by Nepal Rastra Bank (NRB) on Wednesday. 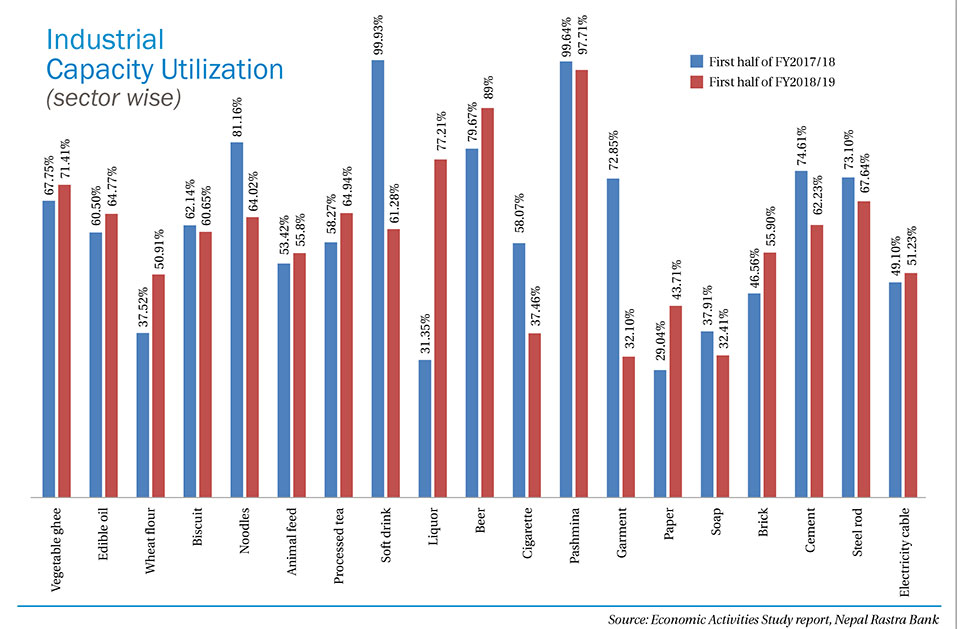 According to the half-yearly report entitled ‘Economic Activities Study’, the industrial capacity utilization – the rate that measures the extent or level of manufacturing and production of any industry or plant – inched up by two percentage points from the corresponding period of the last fiscal year – FY2017/18.

The central bank’s report is based on a survey conducted in major industries of 23 sectors in 57 districts. The survey found the rise in capacity utilization of soft drinks, jute products, processed leathers, paper and paper products, and plastic goods. On the other hand, capacity utilization of vegetable ghee and oil, processed milk, grains and poultry feeds, cigarette, resin, electricity wires and cables industries fell, according to the Economic Activities Survey.

An official of the NRB told Republica that the gradual rise in industrial capacity utilization indicates a progress in the performance of domestic industries that the government is promoting through various incentives and subsidies. “If you compare capacity utilization of last three or four years, you can see a gradual growth in performance of Nepal’s industrial and manufacturing sector. This is a positive signal that the industrial environment is improving and our domestic industries are become competitive,” Gunakar Bhatta, an executive director at the NRB, said.

While an uptick in capacity utilization rate indicates improving industrial outlook, private sector leaders say that there still is a lot of room for the progress.

“The capacity utilization rate has not gone down. That’s actually good. But, 60% of capacity utilization means 40% of our plants or machineries is sitting idle,” said Pashupati Murarka, an immediate past president of the Federation of Nepalese Chambers of Commerce and Industry (FNCCI). “Had easy and cheaper credit been available, the industrial output could have gone up. Higher industrial output means our industries will become competitive and their products will become cheaper,” added Murarka.

Some economists have concerns over slow growth in industrial capacity utilization despite having a government with two-thirds majority, relatively stable power supply and cordial labor relations.

But, NRB officials say that the survey results may not reflect the complete picture of the country’s industrial scenario. “First, the economic study was carried out in the first six months of the current fiscal year which means it does not reflect utilization rate of the second half of the fiscal year. Also, the sample that we have in this study does not capture the capacity utilization of many of the industries which entered the market in recent years,” said Bhatta, who heads the Research Department of the NRB.

“Also, the guidelines that govern the economic activities survey are quite old. We will revise it next year so that we can have a more real picture,” he added.