The government directive made it possible for returnee workers to claim refund for flight tickets.

Not many migrant workers who had returned home paying for the airfare as they were repatriated under the government's evacuation plan have applied for the reimbursement of their costs. 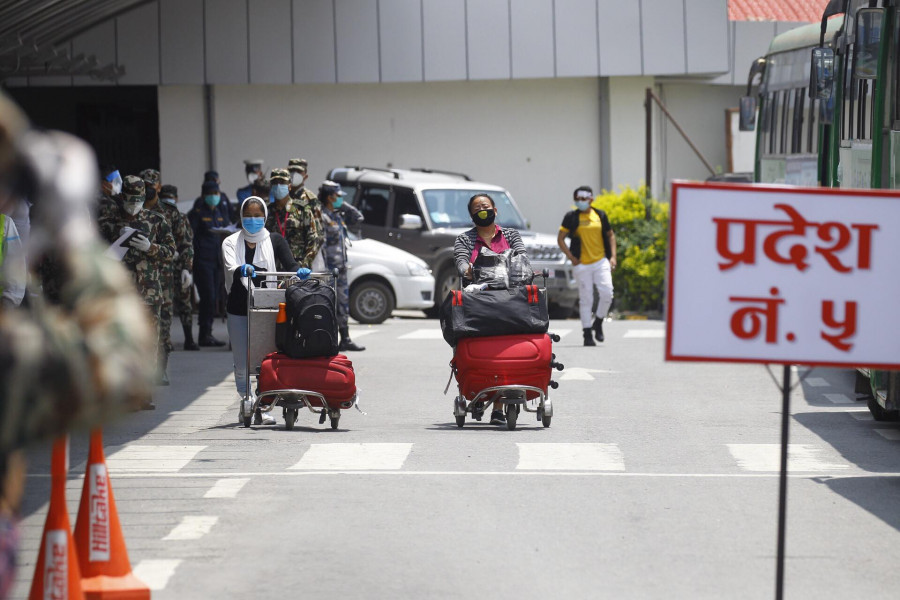 Months after the government started evacuating Nepalis stranded in various pandemic-hit labour destinations, only some of those who returned have come forward to seek reimbursement of the amount they spent for the trip.

According to Tikamani Neupane, spokesperson for the Department of Foreign Employment, the authority overseeing the matter, as many as 30 returnees have so far reached the department asking for the refund.

“We have only received 30 applications from workers who have demanded reimbursement of the amount they spent while returning home,” Neupane told the Post. “We have collected all the documents and sent them for verification with the Nepali missions abroad before their amount could be reimbursed.”

The government’s repatriation guidelines, which came after the Supreme Court ordered the government to bring home stranded migrant workers free of charge, had provisions for reimbursement.

Following the directive, any worker who qualifies for financial support but has come to Nepal at his own expense could apply to the department for reimbursement. The department then sends the details to the concerned diplomatic mission for verification that the worker did not receive any support from the host government, employer or any other means for returning home.

Once the concerned mission has investigated the details and ascertained that the ticket cost has to be borne by the government, the worker’s details will be sent back to the Foreign Employment Board. The board then deposits the amount to the worker’s bank account.

The provision related to reimbursement was seen as a positive side even though the directive was criticised for laying out a cumbersome process.

“But the number has remained pretty low so far,” said Neupane. “Workers must be aware of this facility, but they have not turned up for compensation, which could be due to multiple reasons.”

Those seeking compensation can only apply at the Buddhanagar-based Department of Foreign Employment.

According to Neupane, the need for documents and travel to Kathmandu might be the reason behind the small number of returnees submitting applications.

“They have to submit original documents, and they cannot do it from their respective districts. And, coming to the capital city during this time is not preferable,” said Neupane, explaining the reasons.

Since the government started the evacuation process, a total of 126,989 Nepalis have returned home on repatriation as well as regular flights from dozens of countries as of Friday. A majority of the evacuees are Nepalis working in countries in the Persian Gulf and Malaysia, having suffered months of ordeal without money, jobs and food.

According to Neupane, although the department has not received a significant number of applications for reimbursement, the authority keeps getting telephone inquiries.

“If the situation was any better, more workers would have applied for compensation as we are getting calls every day asking about the process of getting the refund,” said Neupane.

“Many might not have applied believing they are at least safe at home. We encourage workers to apply if they are qualified because they are the ones who contributed to the Foreign Employment Welfare Fund, which will be used for reimbursing them. It is their money.”