The new pricing will ensure a 22 percent profit for farmers, excluding their cost of production.
The minimum support price for coffee has been increased by 5 percent on average to reflect the higher cost of production, the National Tea and Coffee Development Board said. 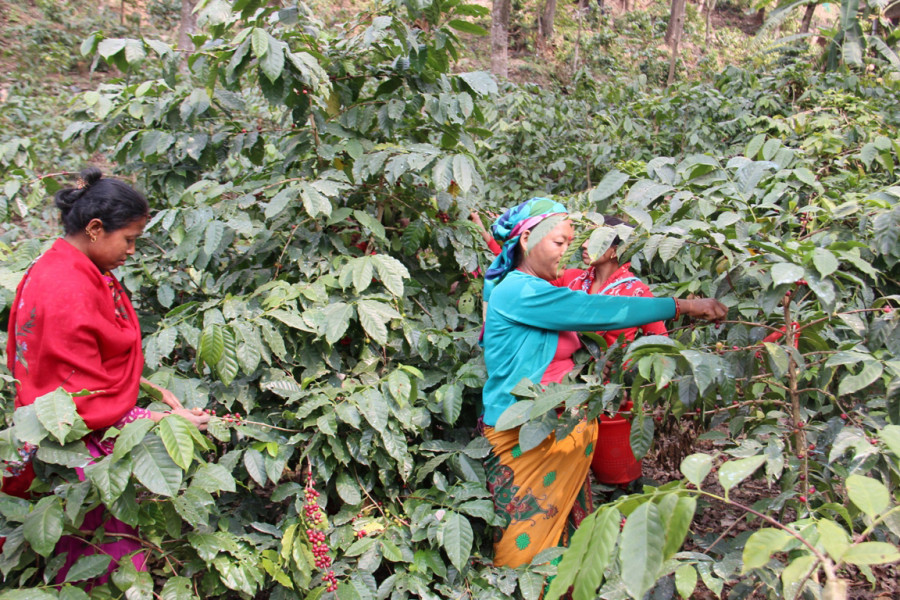 Coffee farmers now get Rs90 per kg for fresh cherry (A grade) coffee, up Rs5 per kg. ‘A’ grade coffee needs to be certified as organic.

The price of ‘B’ grade coffee remains unchanged at Rs80 per kg. ‘B’ grade fresh cherry does not require organic certification.

When the cherry is ripe, it changes colour into a bright and deep red, and then it becomes ready for harvesting. The dried beans are known as parchment coffee.

The price of dry cherries that could not be processed within 12 to 24 hours through cold processing, and have been stored with a moisture content of 20 percent, has been fixed at Rs148 per kg for ‘A’ grade and Rs95 per kg for ‘B’ grade, the board said.

Bishnu Bhattarai, executive director of the board, claimed that the new minimum support price of coffee had been adjusted through scientific calculation taking into account the cost of production of farmers.

"The new pricing will ensure a 22 percent profit for farmers, excluding their cost of production," he said. "The decision to increase the farm gate price is to benefit the farmers."

In case the market price for the commodity drops below the minimum support price due to a supply glut, government agencies will purchase the entire crop from the farmers at that price. The support price is normally published at the beginning of the sowing or flowering.

Bhattarai said that the market price cannot go below the minimum support price, but many farmers have complained that they are being paid less than that.

Ananda Subedi, chairman of the District Coffee Cooperative Association Kaski, said that the hike in the price of coffee is good news for the farmers whose cost of production has risen significantly.

"Farmers benefit directly when the government fixes the minimum support price," he said. But more government support is needed to increase coffee production, he added.

The government should plan to expand the coffee acreage, production, processing and marketing. This will create jobs for the many youths who are forced to go abroad to earn money, he said.

Coffee is one of Nepal’s niche products that can be well marketed as an organic spice. Demand for Nepali coffee is high in the country and abroad due to its organic content, good quality, taste and aroma as the beans are grown in the highlands with almost no exposure to pesticides, said Subedi.

Demand for Nepali coffee in the international market outstrips supply. “We have not been able to increase production.”

Coffee cultivation in Nepal has expanded to 43 districts. There is demand for about 14,000 tonnes of coffee in the national and international market annually.

As demand is higher than production, coffee imports have swelled and exports have been declining. According to the Department of Customs, 266 tonnes of coffee worth Rs118 million was imported in the last fiscal year while exports stood at 46.89 tonnes valued at Rs57 million.

Chandra Puri, director of the board's Pokhara office, said there would be no problem of market if coffee production is increased.

At present, farmers grow coffee on 2,800 hectares and produce 530 tonnes annually. Various studies have shown that the coffee acreage can be increased to 1.1 million hectares.

According to Puri, nine districts in Gandaki account for 30 percent of the national coffee production. Coffee is also called a farmer's pension as it continues to bear fruit for five decades after being planted.

In 1995, Hira Giri of Aapchaur, Gulmi brought coffee saplings from Burma and became the first farmer to grow coffee. After that, other farmers started planting coffee and cultivation spread.

Syangja district is the largest coffee producer in the country. In 1984, the then king Birendra had declared the western region a coffee area.