Investment Board summons GMR to discuss the fate of Upper Karnali

Investment Board Nepal has summoned Indian infrastructural company GMR Group to discuss the planned Upper Karnali hydropower project which remains in limbo for lack of an agreement with prospective energy buyer Bangladesh over tariffs. 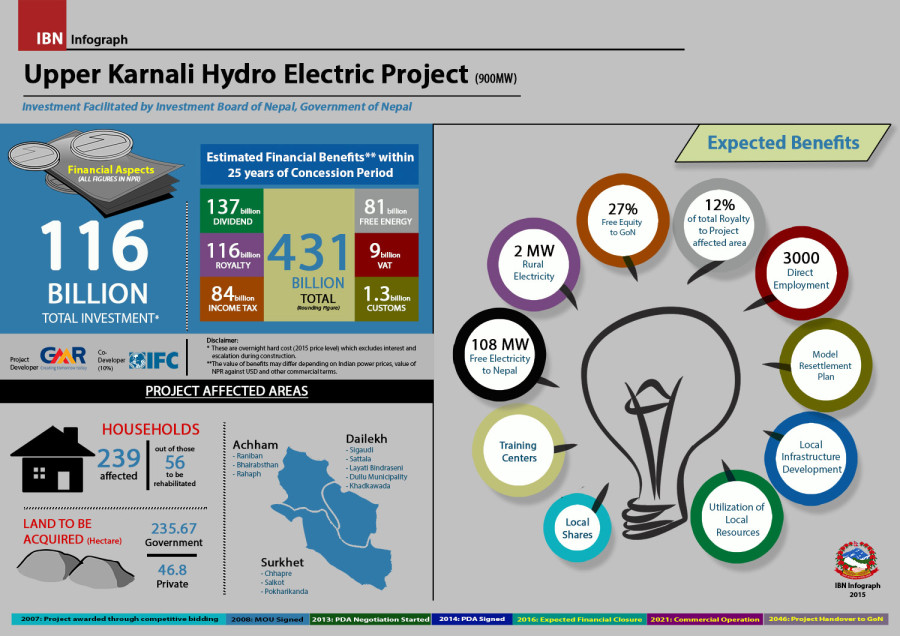 The export-oriented 900-megawatt scheme is located in western Nepal. According to Maha Prasad Adhikari, chief executive officer of Investment Board Nepal, GMR officials are expected to arrive this week to hold formal discussions on issues pertaining to project development, deadline extension and financial closure.

The move comes days after Indian Union Minister of State Raj Kumar Singh asked the Nepal government in a meeting with Energy Minister Barshaman Pun to facilitate the land acquisition process, and proposed to allow another Indian developer to build the project if GMR was unable to execute it.

Investment Board officials said it would be less complicated if GMR sorted out financial arrangement issues and initiated the project even though it is running late.

“We have taken a wait and see approach as the board wants the project to be developed without complicating issues further since a project development agreement has been signed with the Indian developer,” said Adhikari.

Even though it has been five years since the board and GMR signed the project development agreement, the Indian company has been unable to perform financial closure and begin construction. It has only conducted several studies as required by the agreement.

The second deadline extension expired in September 2018, and despite multiple requests from GMR, the board has not been able to decide whether to extend the time limit for the third time or not.

Bangladesh had signed a memorandum of understanding with India’s NTPC Vidyut Vyapar Nigam to import electricity from the Upper Karnali scheme via India during Bangladeshi Prime Minister Sheikh Hasina’s visit to India in April 2017.

Last year, GMR and the Bangladesh Power Development Board reached an agreement in principle on the commercial terms of the power purchase agreement excluding tariff rates, paving the way for the Indian company to export 500 megawatts to power-hungry Bangladesh.

But the two parties have not been able to break the deadlock in negotiations over the power purchase and sales agreement.

“Commercial negotiations have concluded for almost all the key clauses such as payment obligations and termination terms, as of date,” said an anonymous GMR official. “But we are yet to settle on the tariffs to be placed on power sales.”

According to the official, the project also faces issues over forest clearance and land acquisition as ownership records exist for only 35 hectares out of the 49 hectares of private land that need to be acquired. And since the people occupying the 14 hectares do not possess title deeds, land acquisition has not been concluded.

Energy officials disagree. “When Indian Union Minister of State Singh said that the developer was grappling with land acquisition problems, Nepali officials denied there was any such difficulty,” an official present at the meeting told the Post.

Amid delays in implementing the scheme, political parties and activists belonging to the Save Upper Karnali Campaign have repeatedly asked the government to scrap the deal with GMR as it has been clinging to the project without showing any progress.

Earlier, a Nepali secretary-level delegation had flown to Bangladesh and held a meeting with Bangladeshi energy authorities, but they were unsuccessfully in persuading them to fix a three-month timeframe to reach an agreement with the Indian developer on purchase rates.