KATHMANDU, Dec 18: With an alarming increase in road fatalities across the nation in the past few months, stakeholders from various walks of life have voiced real concern . 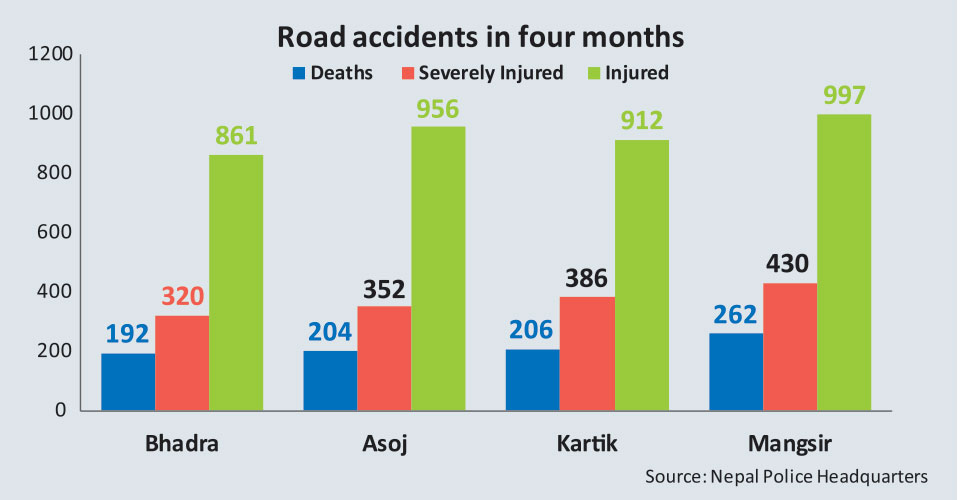 Nepal Police data shows that 4,298 road accidents took place in the first four months of Fiscal Year 2018/19, leaving 864 people dead and 1,488 critically injured.In the last one month, four major accidents took place killing 49 and critically injuring scores of others. The number of road accident deaths rose by 27 percent from Ashwin (September 17 to October 17) to Kartik (October 18 to November 16). There were 206 fatalities in Ashwin and 262 in Kartik. The figures for Shrawan (July 17 to August 16) and Bhadra (August 17 to September 16) were 192 and 204 respectively.

Observers say the reasons behind the drastic surge in casualties are poorly constructed roads, lack of infrastructure along the roads, lack of traffic police manpower, low age limit for heavy vehicle drivers, and the sheer increase in the import of new vehicles.

In one harrowing accident in Nuwakot on Thursday, 20 people died when a mini-truck carrying about 40 could not negotiate a bend in the gravel road . Observers said the reasons for the accident were poor road design and an underage driver.

This was also the opinion of former DIG Keshav Adhikari, who was chief of traffic police for 20 months.“Roads in Nepal are built unscientifically, with many blind spots . The Nuwakot accident also took place because of this,” Adhikari said. Blind spots are points along the road where drivers cannot see a vehicle coming from the opposite direction even when they are within four or five meters. Such spots are prone to head-on collisions. By the time the driver notices the other vehicle it is too late to take evasive action.Adhbikari added that a lot of road accidents also take place because the drivers are too young . “The appropriate age for driving licenses for heavy vehicles should be more than 21,” he said adding, “Someone who is only 21 is not physically or mentally ready to handle heavy vehicles weighing up to 16 tons.” People that age are not mature enough to take responsibility for the lives of so many .

But the Department of Transport Management (DoTM) claims that 21 is the appropriate age for driving licenses since this is in line with international standards. Spokesperson at DoTM Gokarna Prasad Upadhyaya said, "However, it is true that people need to be physically and mentally mature to drive heavy vehicles.”

Another major reason behind the spike in road accidents is said to be shortage of traffic police personnel . Former DIG Adhikari said there is one traffic cop in the Valley for 900 vehicles. Outside the Valley the ratio is about 1:650 . SSP Basanta Panta, chief of Metropolitan Traffic Police Office, claimed for his part that the police should focus on new technology rather than increasing the personnel strength.

“It is not traffic personnel who will keep the accidents down,” he said, “What we need is more advanced road safety technology.”