KATHMANDU: The losses and casualties caused by calamity (both natural and man-made) have risen sharply in recent years. Data maintained by the Ministry of Home Affairs (MoHA) show that the total estimated losses inflicted by calamities across the country increased by 74 percent from 2017 to 2018. 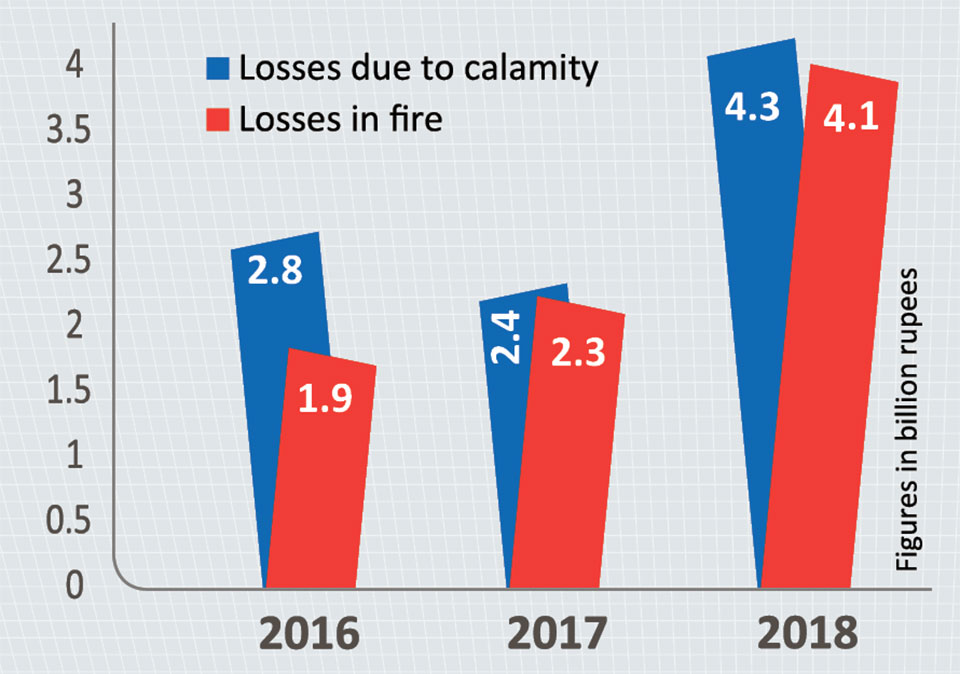 The calamities in the report include fire, lightning, floods, landslides, wildlife attacks and cold wave among others, but fire incidents were responsible for over 85 percent of the total losses.

Officials from the Disaster and Conflict Management Division (DCMD) at the MoHA claimed that the sharp surge in losses due to disasters in 2018 was caused primarily due to lack of public awareness about the right use of modern home appliances.

He added that the increased trend of reporting the cases of calamity, extreme weather, haphazard use of electricity and inflation have also caused the loss figures to bloat.

Under Secretary Khanal claimed that one of the causes for the increase in losses due to fire was lack of public awareness about building codes. “Most of the people disregard the building codes while constructing their houses,” he said. “And they end up compromising on safety standards.”

Under Secretary Khanal admitted that the MoHA has been left with no other option but to increase public awareness to minimize fire accidents. “At the moment, the ministry can only urge people to install fire extinguishers in their homes,” he said.

Khanal added that the DCMD is advocating for a new and advanced approach for fire safety. “We have set our vision of laying water pipes across the valley and building lakes at higher altitudes in the villages in order to extinguish fires,” he said. However, he admitted that the vision is a far-fetched one which will take decades to implement.