District Administration Office in Rupandehi is preparing to bring Nepali migrants stuck in quarantine facilities in the bordering Indian town of Nautanwa.

In the past two days, the local administration in Kanchanpur brought back 242 Nepalis stranded at the no-man’s-land near Bramhadev in the district. All of them are being kept in quarantine at Baijanath Secondary School in Mahendranagar. 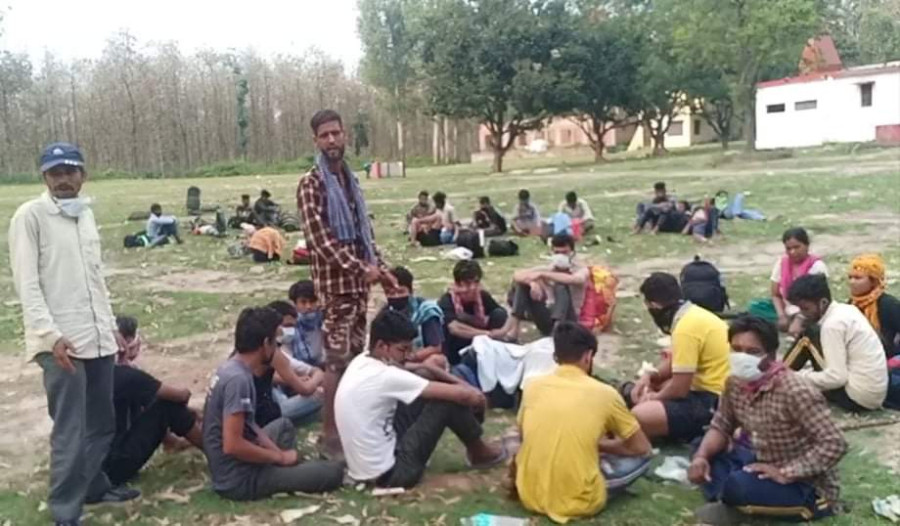 “Indian security personnel brought the 242 Nepali nationals to the border area from various quarantine facilities in India,” said Bir Bahadur Sahu, superintendent of police at the Armed Police Force 35 No Battalion in Jhalari. “We were not informed about it.”

When Nepal and India went under lockdown nearly 50 days ago, many Nepali migrants were kept in various quarantine facilities in Khatima, Banbasa and Tanakpur in India.

The district administration of Kanchanpur had attempted to bring back the stranded Nepalis some two weeks ago but could not take the step without the permission of the federal Ministry of Home Affairs.

“We wrote to the Ministry two weeks ago about the situation but are yet to receive a response,” said Nurahari Khatiwada, the chief district officer of Kanchanpur. “But we can’t leave our citizens stranded, so we decided to bring them back on the condition that they undergo coronavirus tests and stay in quarantine if need be.”

According to Khatiwada, rapid tests were conducted on 235 people and all the reports were negative for the virus.

“We have yet to test the remaining seven due to a shortage of rapid diagnostic test kits. Their throat swabs will be collected soon and sent to Dhangadhi for testing through the Polymerase Chain Reaction method,” he added.

It is estimated that around 300 Nepalis are stranded in quarantine facilities in Khatima, India. They had attempted to enter Nepal on Saturday but the APF personnel had stopped them from crossing into Nepal.

Meanwhile, the District Administration Office in Rupandehi is preparing to bring back Nepali migrants stuck in quarantine facilities in the bordering Indian town of Nautanwa.

The authorities are setting up quarantine facilities and are preparing to run coronavirus tests through the Polymerase Chain Reaction method on those who will cross the border into Nepal.

However, shortage of kits to run PCR tests is a major hurdle for Nepali authorities to allow movement of people across the border and into Nepal. It is estimated that around 700 homebound Nepalis are stranded in Nautanwa-based quarantine facilities. Hundreds of Nepalis have gathered in the Bhairahawa-Sunauli border point to return home.

Nepali citizens who spent three weeks in quarantine facilities in Nautanwa have been protesting against the Nepali government with hunger strikes and sit-ins, demanding they be allowed to return home.

Chief District Officer of Rupandehi Mahadev Pantha said that the stranded Nepalis brought into the country will have to undergo coronavirus tests before they are allowed to go to their respective hometowns.

“We can’t send them home without conducting tests on them. We have demanded the federal government to provide us with 2,000 PCR kits. We can make arrangements to bring home the stranded Nepalis once the kits are supplied,” he said. According to him, the number of Nepali nationals who want to return home is increasing every day.

“The Indian authorities are also under pressure to send the Nepalis home because those at the quarantine facilities have been staging protests, demanding to be sent home. I sent Nepali officers to Nautanwa twice to convince the Nepalis not to stage hunger strikes,” said Pantha. “They will soon be brought home.”

According to Pantha, all local units in the district have been instructed to start setting up quarantine facilities to hold at least 1,000 returnees and run PCR tests on those who have spent 21 days in quarantine in India, given that the authorities are provided with enough PCR testing kits.

“We don’t know the number of Nepalis arriving at the border following the resumption of rail service in India but we expect the number to be large,” Pantha said.

Tilotta Municipality Mayor Basudev Ghimire said that the local unit, following a meeting at the District Administration Office, was holding talks to set up a quarantine facility at Tikuligad Secondary School for at least 200 people.

“We are preparing to conduct tests on all the returnees,” said Ghimire, “If the results come negative, they will head back home. We are prepared to keep them in quarantine for 6-7 days.”

Hira Kewat, the chairperson of Omsatasya Rural Municipality, said that the local unit has urged the CDO to let the returnees leave only after completing their stay at the quarantine facilities.

“It will be difficult to arrange food and accommodation for 200-300 returnees at a time,” said Kewat.