More than 94 percent of the paddy acreage planted

Analysts said the country could still see a significant drop in production.

Nepali farmers transplanted paddy on 94.43 percent of the paddy acreage of 1.37 million hectares this growing season, which is close to last year’s level. 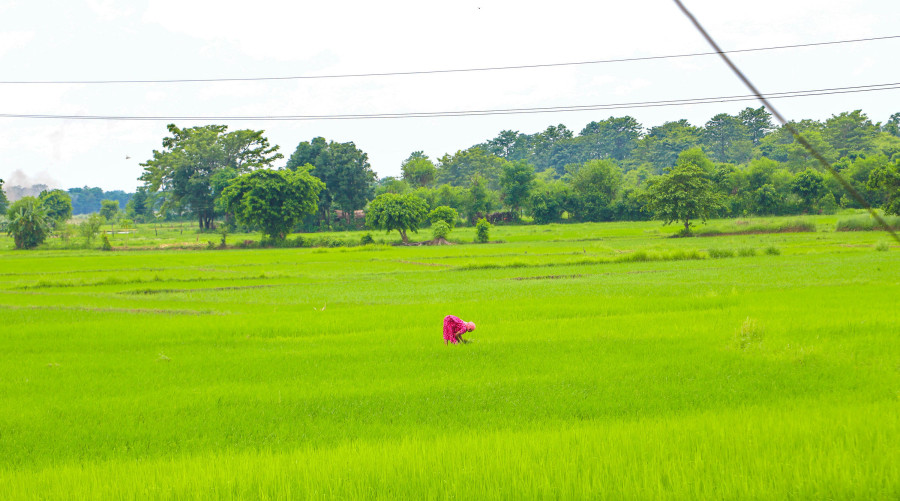 But analysts said the country could still see a significant drop in production due to a combination of factors like delayed monsoon, shortage of chemical fertilizer, shrinking paddy fields and irregular rainfall in most of the paddy producing districts, agriculture experts said.

A possible drop in production may hamper the government's ambitious target of achieving an economic growth rate of 8.5 percent this fiscal year as the country’s economy largely depends on the performance of the agriculture sector, paddy production in particular.

The agriculture sector contributes 27 percent to the gross domestic product (GDP), while the contribution of paddy alone stands at 6 percent. Experts said a fall in paddy production would directly affect farmer incomes, leading to slowed market demand for goods and services.

According to the Agriculture Ministry, the paddy acreage shrank to 1.37 million hectares this year,a sizeable reduction from last year’s 1.55 million hectares. Rapid unplanned urbanization and road construction have been identified as the root causes behind the decline in the land available for paddy production.

In 2018-19, Nepal recorded a record high paddy harvest of 5.61 million tonnes with an all-time high productivity of 3.8 tonnes per hectare. As a result, Nepal’s economic growth rate swelled to 6.3 percent.

“There is a sharp decline in the amount of arable land to produce paddy which will definitely have an impact on the volume of production, and also on the GDP growth rate,” said Suroj Pokharel, former secretary of the Agriculture Ministry. Pokharel also served as an agriculture expert at the Food and Agriculture Organisation of the United Nations. According to him, arable land has been shrinking by around 2 percent annually.

Paddy transplantation usually starts in June and continues for two weeks in the hilly region. In the Tarai, farmers start transplanting paddy in mid-July and continue for three weeks.

This year, the monsoon, which delivers 75 percent of the rains and is the lifeline of Nepal’s agriculture sector, was delayed by two weeks.

Pokharel said the delayed transplantation could directly affect the productivity of the plants. “It mainly affects paddy plants that mature within a short time period,” he said.

Pokharel said farmers suffered from an inadequate supply of both chemical and organic fertilisers, and some of them mistakenly transplanted the wrong type of saplings which would also affect the productivity of the agro product.

“Due to the apathy of government agencies, farmers in the hilly region were found to be transplanting a paddy type recommended for the Tarai region.”

Analysts said that paddy production this year would also depend on the availability of fertiliser and the amount of rainwater that the paddy fields will receive during the next one-month period from mid-August to mid-September.

“Productivity largely depends on the availability of nitrogenous fertiliser and rainfall during the panicle initiation stage—the reproductive phase of rice development—of paddy that lasts mainly up to 35 days from the date of transplantation,” said Bhola Man Singh Basnet, a paddy.