Nearly 1.5 million Nepalis are at risk of various forms of human trafficking, says a new report by the country’s human rights commission. 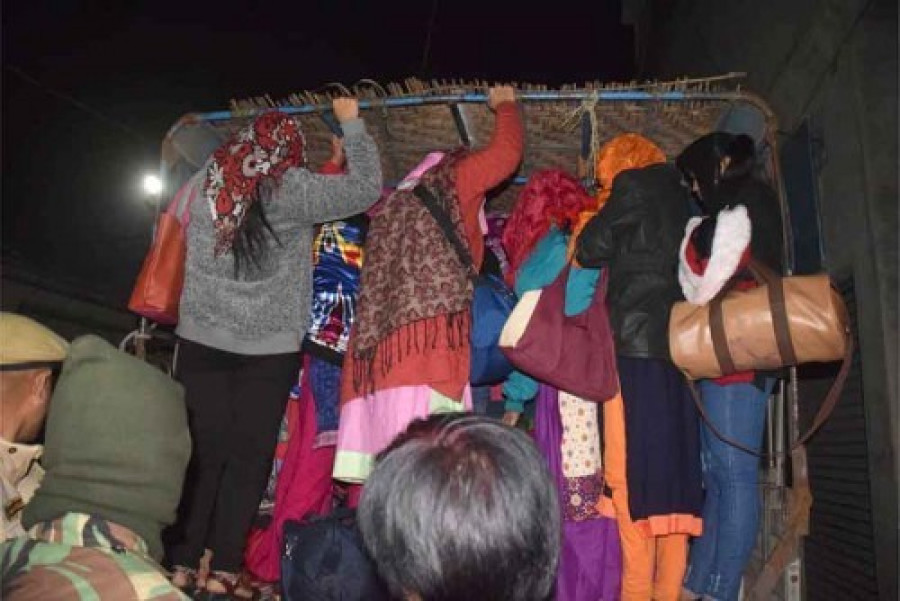 According to the report, released by the National Human Rights Commission on Monday, aspiring migrant workers, Nepalis working abroad, people in the adult entertainment sector, girls and women from rural areas, missing persons and child labourers are among the groups most vulnerable to trafficking. This makes Nepal a source, as well as a transit and destination for human trafficking.

The annual report of the human rights body estimated that nearly 35,000 Nepali citizens—15,000 men, 15,000 women and 5,000 children—were trafficked last year. Foreign employment and child labour made up nearly 70 percent of the total traffficked population, followed by those from the entertainment sector and those reported missing.

The bleak picture of human trafficking in Nepal comes just a week after a group of 44 Nepali women were repatriated from China. They were duped by a recruitment agency in Nepal which had promised a well-paying job in a Chinese garment company.

The report states that nearly 1,000 Nepali women and girls are annually rescued from India, where they are taken for sex trade, forced labour, housemaid and taking them further to third countries, by various NGOs. Poor screening at the open border between Nepal and India, which is often used for human trafficking, and lack of formal mechanisms in both countries to address the issue continues to make cross border trafficking major challenge for Nepal.

Although cross border human trafficking incidents remain a challenge for decades, there is not an integrated system that keeps record on actual number of people trafficked.

According to Nepal Police, 2,104 Nepali citizens potentially human trafficking victims were brought back from India-Nepal border last year whereas various NGOs figure shows that over 10,000 have been rescued from various border crossings after screening during the same time frame.

“Human trafficking has been a global issue and continues to be a challenge for Nepal where despite of efforts, vulnerability of its citizens towards human trafficking and transportation has not come down significantly,” said Mohana Ansari, commissioner at the NHRC.

According to Ansari, Nepalis are being trafficked beyond India in recent years with several cases of Nepali women and girls trafficked to China and several African countries through India.

The report pointed out missing children and adults are also ending up as the victim of human trafficking. According to Nepal Police data, a total of 13,678 went missing last year and only 47 percent of them were found later that year, indicating that most of those who are still missing might have been trafficked.

Only 53 district police offices submitted data for the research on incidents related to human trafficking. Out of them, missing cases were reported in 41 districts including Dhading, Rasuwa, Kavrepalanchowk, Achham, Nuwakot, and Pyuthan which are highly vulnerable to human trafficking.

Despite the rampant cases of human trafficking outside and within the country, filing complaints have remained comparatively low.

The Department of Foreign Employment—the government body overseeing foreign employment, its governance and related fraud cases—received 2,383 cases registered in fiscal year 2017-18. But most of these cases never reach the police. According to Nepal Police records, 200 to 300 human trafficking cases are registered annually across the country.

In the first nine months of the last fiscal year, various NGOs had rescued 640 persons—of which 374 were victims of domestic human trafficking and 266 were repatriated from overseas—as victims of international human trafficking rackets. But only 174 cases were reported to the police.

“However, the cases filed at the department were resolved inside the department without conducting an adequate investigation,” added Ansari. “Even rescued people were not benefited with any social security schemes which only leave them at the risk of being trafficking again.”

Right activist also criticised the government ban on women migrant from taking up housemaid jobs as discrimination against women. They urged that human trafficking incidents should not be seen as general fraud cases.

“Prohibiting women from migrating is not the solution. This only makes them more vulnerable and creates gender-based discrimination,” Bharati Silwal Giri, chairperson at National Network Against Girls' Trafficking said. “Foreign employment and anti-trafficking laws should be aligned. In absence, the perpetrator is walking freely as a recruiter or mediatory agent.”

The National Human Rights Commission has a long list of recommendations for the government authorities to address this burgeoning crisis from revising human trafficking laws to allocating more resources to government mechanism overseeing such cases for better screening at borders and ensure access to justice for those who are trafficked. It also pointed out the need for an integrated data system to maintain details of such trafficking incidents.

Puskhar Sapkota, joint secretary with the Home Affairs Ministry said the government has already established a full-fledged Anti-Human Trafficking Bureau to oversee such cases and the Cabinet has passed the Palermo Protocols, a set of three protocols that were adopted by the United Nations to supplement the 2000 Convention against Transnational Organised Crime, including trafficking in person, and forwarded it to the Parliament for ratification discussion this year.

“The government has accepted all the recommendations enlisted in the report for effectively working against the human trafficking crimes,” said Sapkota.