Nepal and Myanmar to hold talks to develop Himalaya 2 airspace

The air route is shorter, safer, more economical and efficient for flights between Europe-Middle East and East Asia.

Nepal and Myanmar have agreed to hold talks to develop the Himalaya 2 airspace that has been pending for a long time due to lack of surveillance and communication system along parts of the route over Myanmar, officials said. 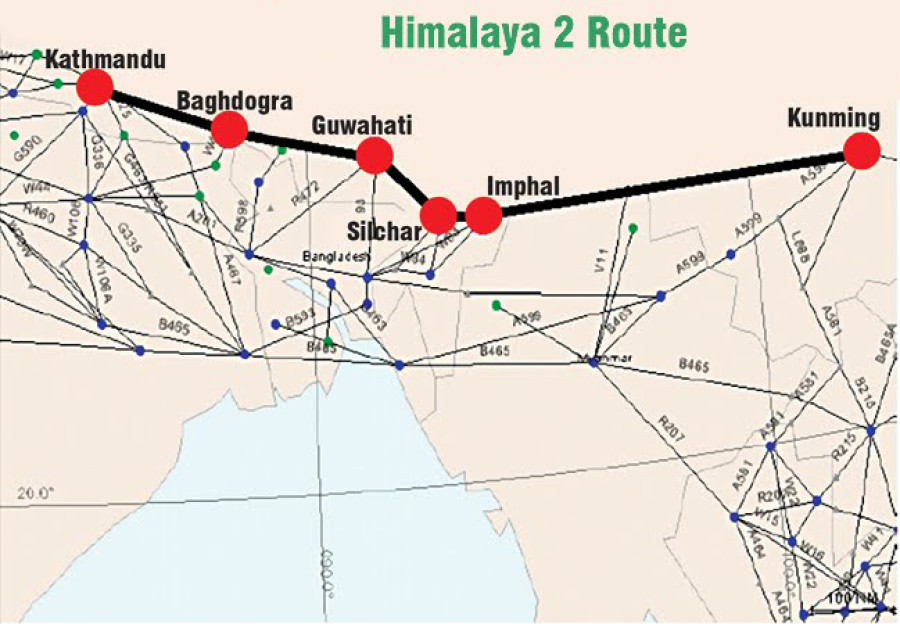 The Kathmandu-Bagdogra-Guwahati-Silchar-Imphal and Kunming air route is shorter, safer, more economical and efficient for flights between Europe-Middle East and East Asia. The proposed route will reduce congestion of westbound traffic flows across the Bay of Bengal.

Nepal has been lobbying for three air routes—Himalaya 1 (Bangkok-Kolkata-Nepalgunj-Islamabad), Himalaya 2 and Himalaya 3 (Kathmandu-Nepalgunj-Delhi)—at different meetings of the International Civil Aviation Organisation and other forums. Among them, the most advantageous route is Himalaya 2.

According to a report of the Civil Aviation Authority of Nepal, the existing distance from Kathmandu to Kunming is 1,085 nautical miles or 2,009 km. The proposed Himalaya 2 route will reduce the distance to 971 nautical miles or 1,800 km. It will shave 15 minutes off the flight time, allowing aircraft flying the route to save 1,824 kg of fuel.

Likewise, the flight time on the Kunming-Delhi sector via Himalaya 2 will be 7 minutes shorter. The distance will be cut down by 57 nautical miles or 105 km. The present distance from Kunming to Delhi is 1,488 nautical miles or 2,755 km. The report said that the implementation of Himalaya 2 route would reduce carbon emission of 2,850 kg per flight.

According to air traffic management officials at the Civil Aviation Authority of Nepal, the Himalaya 2 route will be the best option as India is reluctant to open two-way routes in Nepalgunj or Mahendranagar to facilitate flights to Gautam Buddha International Airport citing defence concerns.

Rajan Pokhrel, director general of the Civil Aviation Authority of Nepal, told the Post that Myanmar had agreed to hold talks to develop the Himalaya 2 airspace on the sidelines of the 56th Conference of Directors General of Civil Aviation, Asia and Pacific Regions which is being held in Kathmandu.

“India and China have already given the go-head to Nepal to develop the route. However, due to lack of surveillance and communication systems in some parts of the airspace in Myanmar, the issue failed to take off,” Pokhrel said. In 2016, Nepal and India agreed to develop the Himalaya 2 air route.

“We will now form a joint technical committee to discuss the issue.” He said that the route was a priority and Nepal needed to take the lead on it, adding that the date for the talks had not been fixed.

“Himalaya 2 will help reduce congestion of westbound traffic flows across the Bay of Bengal and allow airlines to fly over Nepali airspace resulting in savings in fuel and generating revenue for the country,” said Pokhrel. Nepal has been lobbying for implementing the airspace for more than a decade.

Nepal has now installed Mode S Monopulse Secondary Surveillance Radar at the hilltop of Bhattedanda, Lalitpur which has increased the surveillance coverage to more than 75 percent of Nepal’s airspace.