Nepal: first came the earthquake, then came the debt

Ratna Awale counts herself lucky. She and her husband, Prem, and their two sons survived the devastating 7.8-magnitude earthquake in Nepal on 25 April 2015 that killed almost 9,000 people. 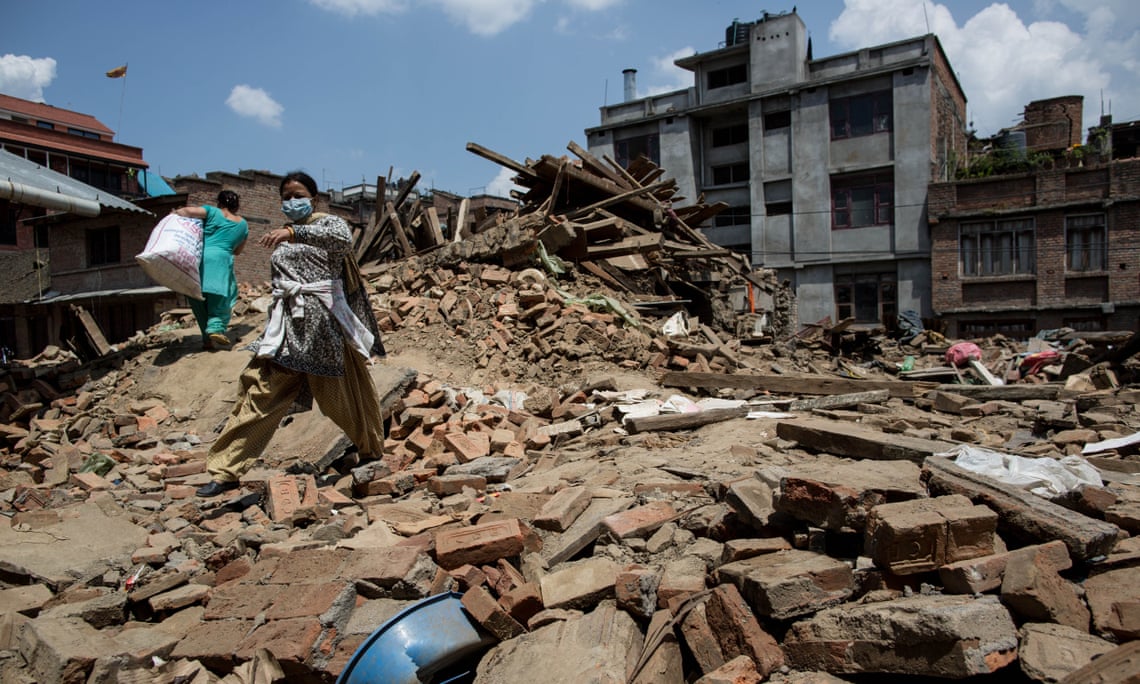 But her narrow four-storey home in Patan, a sprawling, historical city south of Kathmandu, was badly damaged. “There were big cracks from the back of the house to the front wall, and half the ground floor collapsed,” she says.

We are caught between paying the loan and feeding ourselves

The damage across the country cost Nepal an estimated $10bn (£7.8bn), cutting its already meagre economic output in half. The government subsequently offered hundreds of thousands of homeowners $3,000 (£2,300) each to rebuild their homes.

Unfortunately, that only covered only 30-50% of the cost of rebuilding a typical family dwelling, leaving many Nepalese with a new problem: paying for loans.

“I took a bank loan for 1 million rupees [about £7,000],” says Awale. “We’re paying 14%. We are caught between paying the loan and feeding ourselves. Either we eat or we pay the loan.”

In Nepal’s worst-affected districts, 75% of the people who rebuilt their homes relied on loans to do so. Some borrowed from banks; others from informal lenders – neighbours, family members or local businesses – that have been charging up to 43% interest.

The government ordered commercial banks to offer loans at 2%. Many balked, and demanded that borrowers repay the loans within impossibly tight time frames. The scheme was discontinued last month by the National Reconstruction Authority (NRA) after just 1,300 applicants received loans; across the board, the Housing Recovery and Reconstruction Platform Nepal (HRRP) estimates, the average homeowner is paying 23% interest.

The problem doesn’t stop with individual homeowners. Durbar Square in Kathmandu is a stunning medley of Hindu and Buddhist temples, and a major draw for tourists. Many buildings, including the 18th-century Nautale Durbar palace, were badly damaged or destroyed.

With the government heavily indebted, restoration in many cases is being provided for free by the Chinese and other countries. Though the Nepalese government has welcomed China’s help, Beijing’s influenceover its small neighbour has risen dramatically. Some wonder whether it could lead to a so-called debt trap, as has happened in Sri Lanka, where the government has leased a key port to a Chinese company after struggling to repay it for building it.

The challenges facing the authorities are enormous. Nepal is a mountainous country subject to chronic political upheaval, and only recently emerged from civil war. Repairing the damage from the earthquake is a monumental task and the $3,000 grants were never designed to fully cover the cost of rebuilding.

“There are more than 820,000 houses eligible – the scale is massive,” says Siobhan Kennedy of HRRP. “It’s bigger than Pakistan in 2005 and Haiti in 2010 in terms of the number of houses that need to be rebuilt. In terms of scale, this is huge.”

The NRA has surveyed almost a million homes across the country – a major effort in itself – and says 70% of eligible grant beneficiaries are rebuilding. The central bank has just launched a new initiative allowing grantees to pay back their loans over a five-year period.

But just getting the money to those who need it can be difficult. “The biggest problem for us is that many people don’t officially own their own property,” says Rakesh Maharjan, an IT officer at the Earthquake Housing Reconstruction Project in Patan, which oversees the distribution of grants in the area. “They don’t have title deeds.”

He says that in Lalitpur, the municipality that incorporates Patan, fewer than one-fifth of homeowners who applied for the government grant have received all three tranches.

Authorities introduced deadlines that applicants had to meet to receive the payout. But that has led to unforeseen consequences: many homeowners are using the proceeds to hastily construct small, one-room buildings that are clearly unsuitable for families.

For Santosh Maharjan, a 25-year-old student whose family began rebuilding their house in Patan last April, the biggest problem remains getting access to money.

“Two families live in our home – mine and my uncle’s,” he says. “We still need 2 million rupees [around £14,000] to finish the building. My father had to sell his land to help pay for this, and it’s still not enough.”