A chronology of key events:

1792 - Nepalese expansion halted by defeat at hands of Chinese in Tibet. 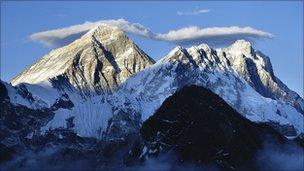 1846 - Nepal falls under sway of hereditary chief ministers known as Ranas, who dominate the monarchy and cut off country from outside world.

1950 - Anti-Rana forces based in India form alliance with monarch. 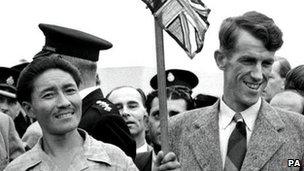 First to the top of Everest: Sherpa Tenzing Norgay and Edmund Hillary 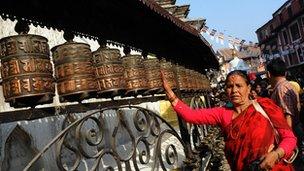 A Nepalese woman spins a prayer wheel, in a country where religion plays a major role 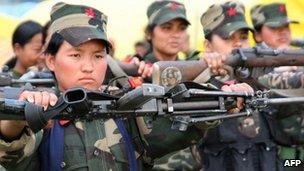 Maoists waged a bloody war against the monarchy

1995 - Start of Maoist revolt which drags on for more than a decade and kills thousands. The rebels want the monarchy to be abolished. 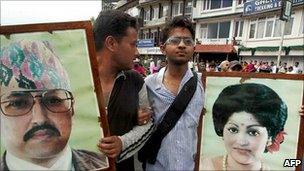 Nepalese mourn the royal family slain in a shooting spree

2001 November - State of emergency declared after more than 100 people are killed in four days of violence. King Gyanendra orders army to crush the Maoist rebels. Many hundreds are killed in rebel and government operations in the following months.

2003 August - Rebels pull out of peace talks with government and end seven-month truce. The following months see resurgence of violence and frequent clashes between students/activists and police.

2005 February - King Gyanendra dismisses the government, restores an absolute monarchy and declares a state of emergency, citing the need to defeat Maoist rebels.

2006 May - Parliament votes unanimously to curb the king's political powers. The government holds peace talks with the Maoist rebels.

2006 November - The government sign a peace deal with the Maoists - the Comprehensive Peace Agreement (CPA) - formally ending the decade-long insurgency.

2007 January - Maoist leaders enter parliament under the terms of a temporary constitution.

2007 April - Maoists join an interim government, a move which brings them into the political mainstream.

2007 September - Three bombs hit Kathmandu in the first attack in the capital since the end of the Maoist insurgency.

2007 December - Parliament approves the abolition of monarchy as part of peace deal with Maoists, who agree to rejoin government. 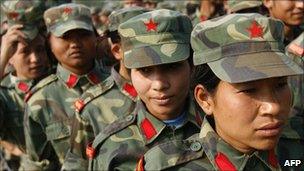 From bullets to the ballot box: Former rebels take part in landmark elections in April 2008

2008 January - A series of bomb blasts kill and injure dozens in the southern Terai plains, where activists have been demanding regional autonomy.

2008 April - Former Maoist rebels win the largest bloc of seats in elections to the new Constituent Assembly (CA), but fail to achieve an outright majority.

2008 June - Maoist ministers resign from the cabinet in a row over who should be the next head of state.

2009 May - Prime Minister Prachanda resigns following a row with President Yadav over the integration of former rebel fighters into the military.

2009 May - Britain announces that Gurkha veterans with at least four years' service in the British army will be allowed to settle in the UK.

2009 December - Four people are killed in clashes triggered by a Maoist-led land grab in the far west, giving rise to fears for peace process.

2010 May - The Constituent Assembly (CA) votes to extend the deadline for drafting the constitution, the first of four extensions.

2012 May - The Constituent Assembly (CA) is dissolved after failing to produce a draft constitution.

2013 November - The left-wing Nepali Congress wins the second Constituent Assembly elections, pushing the former ruling Maoists into third place and leaving no party with a majority.

2014 April - Sixteen Nepalese sherpa guides die in an avalanche on Mount Everest in the worst recorded accident in the mountain's history.

2015 September - Parliament passes a landmark constitution, which defines Nepal as a secular country, despite calls to delay voting after more than 40 people are killed in protests.

2015 October - K.P. Prasad becomes the first prime minister to be elected under the new constitution.

2016 February - Government lifts fuel rationing after the ethnic minority Madhesi communities, partially backed by India, end a six-month border blockade in protest over the new constitution which they say is discriminatory.

2016 July - Maoist party pulls out of the governing coalition. Prime Minister K.P. Oli resigns ahead of a no-confidence vote in parliament.

2017 April - Three former soldiers are convicted over the murder of a 15-year-old girl during the civil war, the first time serving or former members of the army have been found guilty of crimes linked to the conflict.

China and Nepal hold their first ever joint military exercise.

2017 June - Pushpa Kamal Dahal replaced as prime minister by the Congress leader Sher Bahadur Deuba under a rotation agreement reached the previous April and set to last until elections in February 2018.