The famous Himalayan road from Lhasa to Kathmandu, partly destroyed by the earthquake, is back on the travel wishlist as the Kerung-Rasuwa border crossing reopens to international visitors

The overland journey from Tibet to Nepal, on winding roads and amid towering Himalayan peaks, must be one of the world’s most breathtaking.

Now, two years after the April 2015 earthquake that devastated Nepal, killing close to 9,000 people and leaving countless homeless, foreign visitors will once again be able to cross the border by land, as road repairs continue.

In August, Chinese authorities announced that the border at Kerung-Rasuwa had opened for international visitors, meaning the classic route from Lhasa, Tibet, to Kathmandu, Nepal, is possible once again. The border had been open as a trade route for Chinese and Nepalis but not to tourists; the crossing previously used by visitors, at Kodari, on the route of the Friendship Highway, remains too badly damaged to use.

With the land border closed, travellers hoping to move between Lhasa and Kathmandu had no choice but to fly on one of the Chinese airlines operating the roughly 90-minute route. Round trips could cost anywhere between £300 and £700. 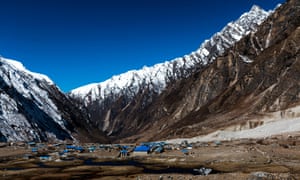 For those running tours in the region, the opening of the border crossing is a “huge step” for tourism.

“Nepal has always been a gateway to Tibet for travellers,” says Shiva Dhakal, managing director of Kathmandu-based tour operator Royal Mountain Travel. “Most travellers dream of going to Tibet overland but, with no border open, the adventure was missing while travelling there.”

Dhakal says the infrastructure on the Nepal side remains poor and Royal Mountain’s upcoming trips are still fly in/fly out, but he hopes to relaunch overland trips from April 2018.

“The road is there but it’s one-lane only,” he says. “So if there’s a truck on it there’s no way to get round it. There’s a lot of construction, which is difficult to pass on the Nepal side, and it is still the monsoon season. In November, we will go to Kerung and make our own assessment on whether it’s OK for tourists.” 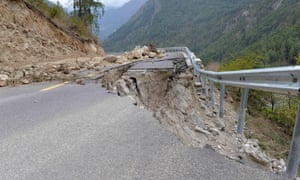 The 2015 earthquake damaged mountain roads both sides of the border. Photograph: Alamy

For climbing and outdoors writer Ed Douglas, who has travelled extensively in the Himalayas, poorly built roads and the risk of landslides mean the border between Tibet and Nepal will always remain fragile. In the past it has also often closed to foreigners at short notice. “The Chinese want to be able to say Tibet is open while maintaining strict control over it,” he says, adding that the priority is the millions of Chinese tourists in the region, rather than the small number of westerners. “If you keep the border open to tourists you can say it’s open and if you keep the numbers down, you avoid problems,” he says.

However, the draw of the journey remains unchanged. “In the space of a few miles, you’re going from around 1,000 metres up to the Tibetan Plateau, which averages around 4,200 metres, crossing one pass at 5,000 metres,” says Douglas. “It’s an astonishing journey, going from a lush green landscape to an arid plateau. It is one hell of an experience.”