Nepali export products being priced out of the market

Revenues from exports of five of the nine listed products dropped in the last fiscal year.

The value of exports of five of the nine products listed in the Nepal Trade Integration Strategy (NTIS) dropped in the last fiscal year. Revenues from the export of cardamom, ginger, tea, leather and footwear, listed in the NTIS as high-value items, shrank. 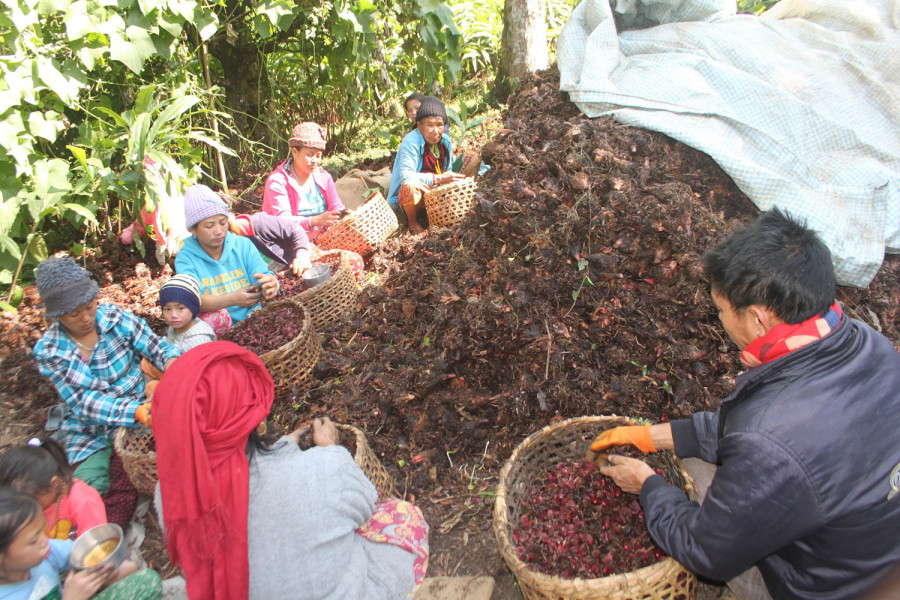 Market analysts attributed the loss to the failure of Nepali products to compete with low-priced products from India and China in the international market.

The government put nine products in the NTIS list in a bid to boost export earnings and contain ballooning imports by providing a cash incentive to exporters. The statistics of the Trade and Export Promotion Centre show that export earnings from NTIS products rose by a mere 2 percent in the last fiscal year.

Silver jewellery, honey, lentils, noodles, iron and steel products and handmade paper were removed from the list when it revised the NTIS three years ago as their exports did not improve.

“The government did not even carry out a detailed assessment of the potential of these products before including them in the NTIS list,” an anonymous ministry official told the Post.

The government gives a cash incentive equivalent to 3-5 percent of the export value of NTIS products. Traders get a 5 percent cash incentive for exporting processed tea, large cardamom, ginger, leather goods and processed herbs and oil products with a value addition of at least 50 percent.

Traders get a 3 percent cash incentive for exporting pashmina products under the Chyangra Pashmina brand, textiles, woollen carpets, and yarn made of polyester, viscose, acrylic and cotton.

“Although the government has been spending huge amounts of money by revising the threshold of the cash incentive, the scheme has failed to yield results,” the ministry source said.

Prachanda Shakya, senior vice-president of the Federation of Handicraft Associations of Nepal, said the cash incentives provided by the government are much lower than in neighbouring countries. “A majority of Nepali products are not able to compete with low-priced products from India and China,” said Shakya.

Former commerce secretary Purushottam Ojha said non-tariff barriers, chiefly in India, and low-quality products were among the reasons behind the poor performance of the major export items.

“The government needs to revise the export basket besides promoting them more vigorously in the international market to benefit from exports,” said Ojha.