A drop in jute output in Nepal, India and Bangladesh has sent prices soaring, hurting Nepali factories that manufacture bags and other products from the golden fibre. The price of raw jute has jumped by 50 percent to Rs90 per kg, jute traders said. 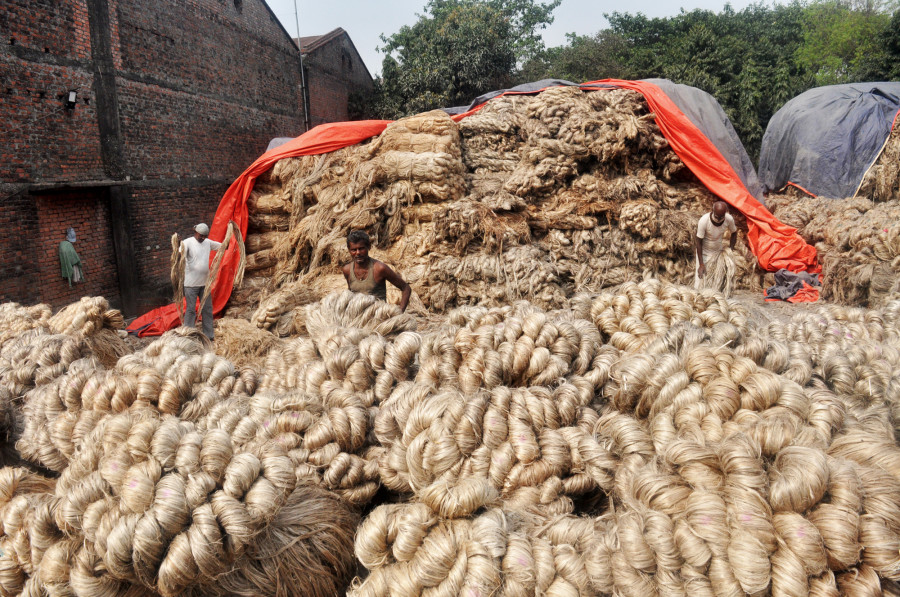 Jute bags are in great demand currently, and they fetch high prices; but the factories have not been able to go into full scale production and capitalise on it due to Covid-19 related lockdowns and transport restrictions.

Despite the massive demand for jute products, factories had to shut down and furlough workers.

Raj Kumar Golchha, president of the Jute Industries Association, said that with the hike in the price of raw jute that is mostly imported from India and Bangladesh, factories in Nepal have been facing difficulties in the midst of the coronavirus pandemic.

Only five out of the 11 jute factories in the Sunsari-Morang Industrial Corridor are in operation. These factories procure raw jute from India and Bangladesh and export their finished goods to India.

Nepali factories consume 70,000 tonnes of raw jute annually. Nearly 30 percent of the raw jute requirement is met by domestic production while the rest is imported from India and Bangladesh.

According to jute expert Mohan Chandra Ghimire, local production came to around 20,000 tonnes last year. But this year, domestic harvests totalled only 15,000 tonnes. “Due to the shortfall, a massive 55,000 tonnes of raw jute had to be imported.”

Until three decades ago, Nepali farmers used to grow 150,000 tonnes of jute annually, he said.

The Biratnagar Customs Office said the five jute factories in the district exported finished products worth Rs6.25 billion in the last fiscal year.

Exports of finished jute goods to India in the first two months of this fiscal year were worth Rs700 million. Demand for jute bags swells during the festive season, mostly from sugar mills. As a result, most of the exports are conducted by mid-August.

Three decades ago, the country used to be a major exporter of jute to Europe, and the golden fibre was one of the major sources of foreign exchange. Moreover, the industry has been dropped from the government’s priority list even though the demand for more ecological packaging globally has strengthened its export potential.

Until two decades ago, Nepal used to export raw jute to India. Now it's the other way around with the domestic jute industry importing raw jute and exporting 90 percent of its finished goods to India.

India imposed an anti-dumping duty ranging from $6.30 to $351.72 per tonne on the import of jute and jute products from Nepal for five years that came into effect from January 2017 as the southern neighbour took a drastic policy to protect the Indian jute industry.

Earlier, Indian customs officials had obstructed the export of Nepali products for a month saying that they had to pay 12 percent excise duty.

At that time, the Nepali industry exported manufactured goods with counter value duty on the condition that it would be returned.

Golchha said India has not yet returned about Rs250 million in counter value duty.

Till a decade ago when all 11 jute factories were running, they provided employment to more than 40,000 people. According to Ghimire, more than 20,000 people lost their jobs when six mills were shut down due to a shortage of raw jute, export hassles and lack of power.