The 2018 Nobel Peace Prize has been awarded to two campaigners against rape in warfare, Nadia Murad and Denis Mukwege.

The award was handed to the pair at a ceremony in Oslo on Friday morning.

Murad is an Iraqi Yazidi who was tortured and raped by militants connected to Islamic State. After escaping from her captors, she “became the face of a campaign to free the Yazidi people”, a Kurdish religious minority, the BBC says.

Mukwege is a Congolese gynaecologist who has treated tens of thousands of victims after setting up a “world-class facility to treat survivors of sexual violence” in the city of Bukavu, in eastern Democratic Republic of the Congo, CNN reports.

The two prize winners are being honoured for their “efforts to end the use of sexual violence as a weapon of war” and for their “crucial contribution to focusing attention on, and combating, such war crimes”, said Norwegian Nobel Committee chair Berit Reiss-Andersen.

The Guardian notes that Mukwege had been “tipped to win for many years”, having appeared on the shortlist regularly for about a decade.

The newspaper’s editor, Katharine Viner, applauded his win in a tweet, describing him as “one of the greatest men alive”.

Mukwege and Murad were also congratulated by European Council President Donald Tusk and by BBC Persian’s Nafiseh Kohnavard, who met Murad after she had escaped from her Isis captors.

I congratulate both winners of this year's #NobelPeacePrize. They have my deepest respect for the courage, compassion and humanity they demonstrate in their daily fight.

BREAKING NEWS:
The Norwegian Nobel Committee has decided to award the Nobel Peace Prize for 2018 to Denis Mukwege and Nadia Murad for their efforts to end the use of sexual violence as a weapon of war and armed conflict. #NobelPrize #NobelPeacePrize 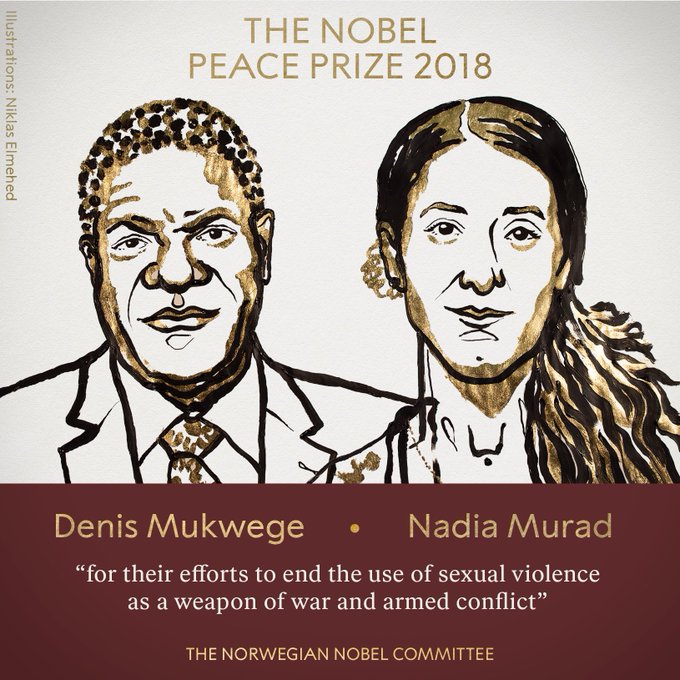 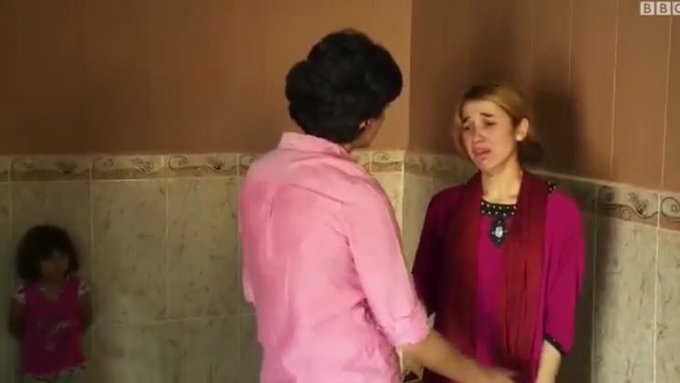 I met Nadia Murad just the day after she managed to escape from #Mosul. I told her we can film the interview anonymously but she refused, “No let the world see what happened to us” she said ... She is now a noble peace prize winner. #Yazidi #Izadi #NadiaMurad

Previous recipients of the Nobel Peace Prize have ranged from humanitarian activists to inventors and statespeople. This year bookies had tipped a somewhat controversial figure to claim the award.

According to multiple news outlets, North Korean dictator Kim Jong Un was the favourite to become the next Nobel Peace Prize laureate alongside South Korean president Moon Jae-in, for their role in de-escalating tensions between the two nations and paving the way for the first ever summit between North Korea and the US.

According to the website Oddschecker, which gathers odds from across betting platforms, Kim and Moon were leading contenders in the run-up to the ceremony, with many betting sites predicting a greater than 50% chance of a win for Kim.

That theory was met with a mixed response.

“Twelve months ago the North Korean leader’s name being mentioned in contention for the award would have seemed absurd - but after months of escalating rhetoric on nuclear weapons, economic sanctions and threats of war, Mr Kim and Mr Moon made history with their summit,” said ABC News.

Not everyone was convinced. In an article in The Washington Post article titled “Dear Nobel Committee: Don’t even think about giving a prize to Kim Jong Un”, journalist Isaac Stone Fish wrote: “Kim’s crimes against his own people should disqualify him for a prize awarded to those who ‘have conferred the greatest benefit to humankind’. More importantly, the Nobel Committee would be singling out Kim for reducing tensions that he mostly caused in the first place.”