KATHMANDU: The National Sports Council (NSC) has unveiled a list of the entry of sports for the upcoming 13th South Asian Games (SAG) to be held in Nepal in December. 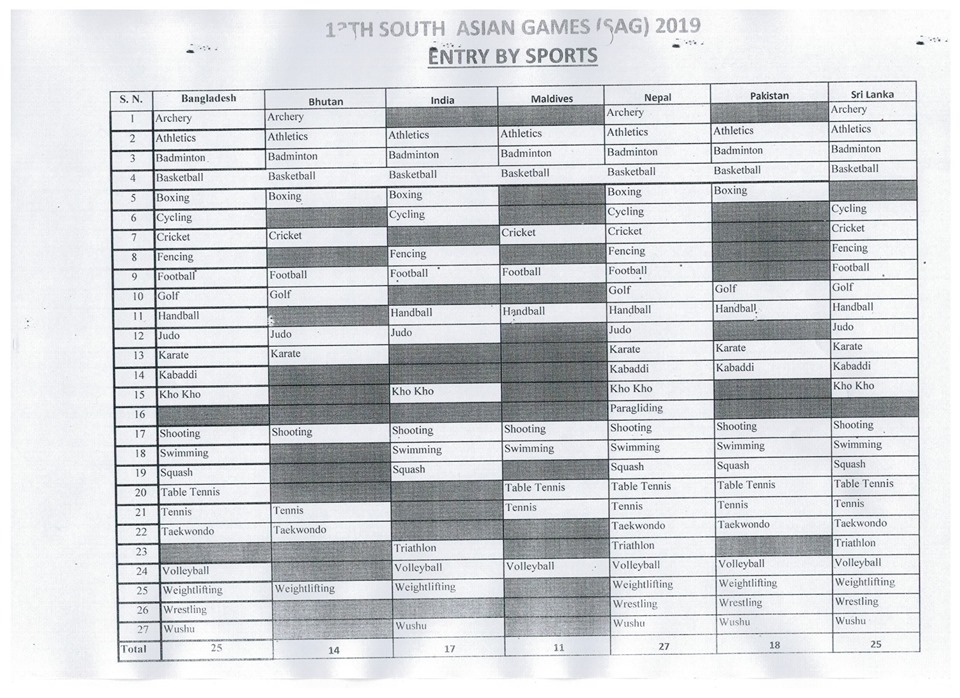 With the 13th edition of the SAG knocking on the door, the list confirms that there will be a total of 26 sports disciplines to be played in the marquee South Asian tournament.

According to the list, the host Nepal is the only country participating in all of the games considering it’s the host for this edition of the games.

Out of the 26 games, all the seven countries in the tournament will be playing only athletics, badminton, basketball and Shooting. In these games, the odds for Nepal winning is actually lower as all the countries will be vying for the gold medal.

However, the lowest number of participating games in the competition are triathlon, archery, fencing, cycling, and kho-kho.  Considering the games have lost some spark over the years, other countries don’t really hype it up for the medals.

So, with the participation of a few countries in the aforementioned games, it gives Nepal a higher probability to win the games. However, Nepal is far off of winning the gold medals in these sports disciplines as it isn’t a clear favorite.

Similarly, every country except the Maldives will be participating in boxing, while giants India and Pakistan won’t play cricket. The only team to not take part in football is Pakistan, while India and the Maldives won’t be associating with golf either.

However, handball will feature all the teams except Bhutan, while Bangladesh, Nepal, Pakistan, Sri Lanka are the only teams registered for kabbadi. Also, Bhutan won’t play swimming and squash, while the Maldives won’t take part in squash.

India and Bhutan are the other duo to not feature in table tennis, while there are only three participants in triathlon—India, Nepal and Sri Lanka.

After Nepal, Sri Lanka and Bangladesh are the highest participating teams in the games with 25 each. Likewise, Pakistan follows Bangladesh on 18 games, India on 17 and Bhutan on 14. The Maldives will play the least games with only 11.