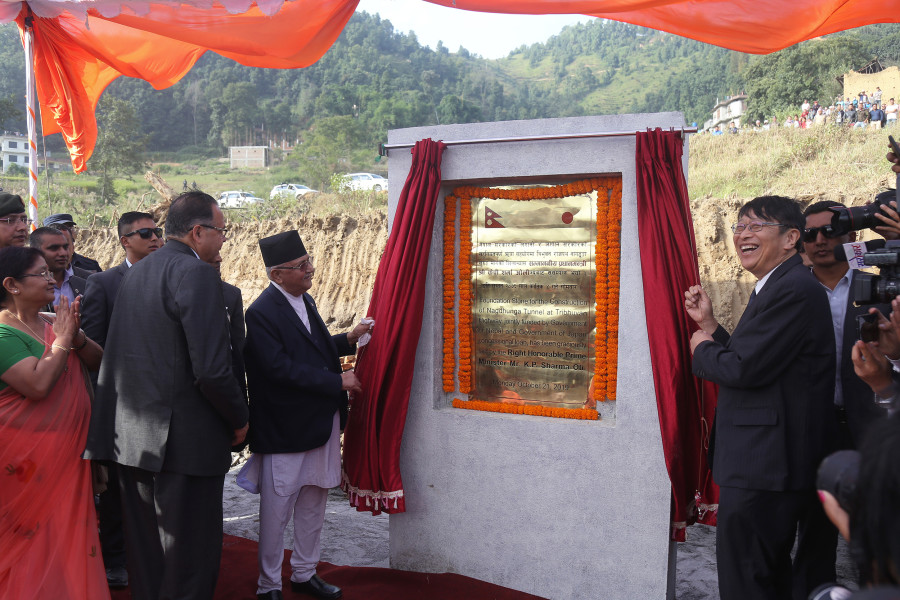 Japanese company Hazama-Ando Corporation will build the tunnel that will pass under the western rim of the Kathmandu Valley, allowing motorists to avoid the winding mountain highway.

The inauguration of the construction comes three months after the donor agency Japan International Cooperation Agency gave the green signal to the implementing agency, Department of Roads, to appoint the Japanese contractor.

However, the construction of the tunnel and approach road will only begin after one and a half months owing to unfinished business pertaining to land acquisition and preparations, said project officials.

“The contractor is currently building camps for its construction crew, and we are actively trying to resolve issues pertaining to land acquisition,” said Shyam Kharel, project chief. “The construction will begin after one and a half months.”

The project office is yet to acquire 44 ropanis of land in Dhading due to differences between the project and locals of Dhunibesi in Dhading over the compensation rate and lack of clarity over acquiring trust lands and unregistered land.

After multiple rounds of negotiations between local authorities, representatives and project officials, an agreement was reached on compensation, but the project office is yet to acquire the land.

The project office and locals of Dhunibesi were locked in a dispute after they demanded Rs3 billion more than what they had been offered for 44 ropanis. Locals had demanded compensation equivalent to the amount paid for land acquisition in Chandragiri Municipality, Kathmandu.

According to Kharel, the project office and locals recently agreed on the land compensation rate after officials agreed to pay 5 percent more than the amount proposed by the project a year ago.

As of date, the project has disbursed around Rs4.5 billion in land compensation in Kathmandu and Dhading.

“As for the land belonging to trusts and unregistered land, we expect the cabinet will make a decision on acquisition soon, allowing us to move ahead with the construction,” said Kharel.

The project covered by a soft loan from the Japanese government was expected to complete the land acquisition process by 2018.

In 2016, the Japan government had agreed to provide a soft loan of Rs15.28 billion to build the Nagdhunga Tunnel to eliminate the need to travel the circuitous route over the Valley’s western rim, which is the main overland link between the capital and the southern plains.

Infrastructure experts are divided over the rationale behind building the tunnel at a time when the government has made plans to build the Nijgadh fast track, an alternative and faster route compared to Tribhuvan Highway where the tunnel is located.

While some say there is no justification behind investing in a scheme similar to the fast track, others insist that the tunnel project is relevant and greatly needed. The tunnel will eliminate the many switchbacks on the main highway leading into Kathmandu, and shorten travel time to the southern plains.

“The Nagdhunga Tunnel is a reactionary move to eliminate jams rather than a strategic one with proper evaluation of benefits and usage, the rationale behind investing billions in it cannot be justified or countered as it is being built just to solve the issue of traffic congestion.”

According to Acharya, the project will be a great learning opportunity for Nepal’s stakeholders as it will be built by Japanese technicians who are considered to be the best tunnel builders in the world.

“The tunnel will facilitate incoming traffic from western parts of the country and also the tourist destinations of Pokhara and Mustang,” said Kishore Thapa, former secretary of the Ministry of Urban Development. “Heavy vehicles and traffic flowing from the eastern parts to or from Kathmandu can choose the Nijgadh fast track, so both projects are relevant and much needed to eliminate congestion on the entry routes to Kathmandu.”

Once built, commuters on the Nagdhunga-Naubise stretch will be able to avoid at least 19 hairpin bends and sharp curves along an 8-km section of the roadway.

Initially, the project was expected to go into implementation by January 2019, but it got bogged down in paperwork leading to delays in contractor selection.

As per a 2015 preparatory survey, it takes around 34 minutes to navigate the 8-km section following the route's existing alignment.

The project, which will be overseen by the Ministry of Physical Infrastructure and Transport, is expected to be completed within three and a half years from the date of implementation.

The proposed tunnel will have two 3.5-metre lanes and a 2.5-metre shoulder. It will also have LED lighting, mechanical ventilation, evacuation tunnel door and emergency telephone service.

The approach road will have two flyovers, toll booths and a roadside rest area for travellers. The rest area, spread over 4,650 square metres, will have parking space for nine heavy vehicles and 23 light vehicles, fast food restaurants, shops and toilets.