The State of Global Report 2020 says Nepal had the second most PM2.5 concentration levels in 2019.

As the country braces for deteriorated air quality with the approaching winter season, Nepal has been once again ranked as one of the most polluted countries in the world. 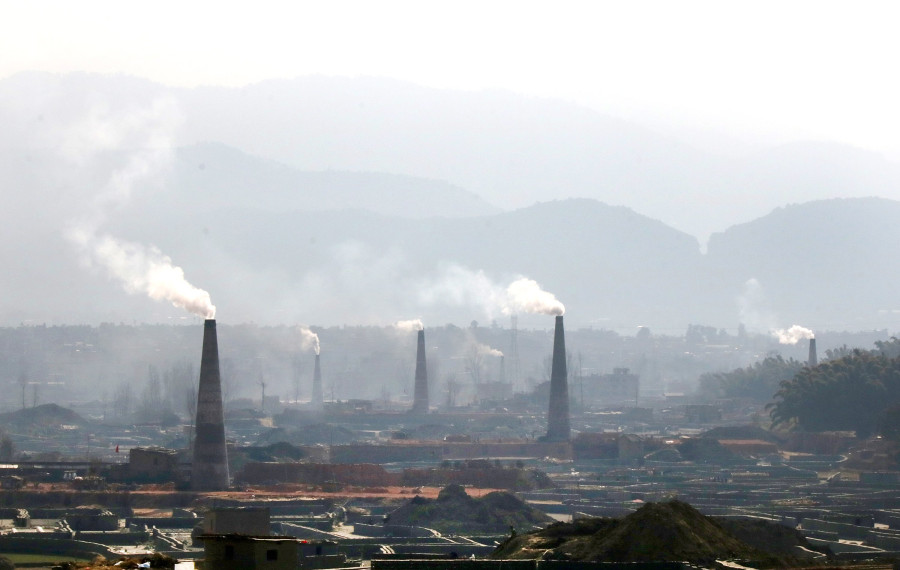 The State of Global Air report 2020 places Nepal among the top 10 countries with the highest outdoor PM2.5 levels in 2019. With an annual average emission of 83.1 micrograms per cubic meter (μg/m3) of PM2.5 in the country, Nepal was placed only behind India.

Over 90 percent of the world’s population experienced annual average PM2.5 concentrations that exceeded the World Health Organization’s Air Quality Guideline of 10 μg/m3, according to the report, released on Wednesday.

PM2.5, or particulate matter less than 2.5 microns thick, are among the most dangerous pollutants that can get past the nose and throat to enter the lungs and even the bloodstream. Since PM2.5 particles are small, they are also likely to remain suspended in the air for longer, increasing the chances of people inhaling them.

As per the report, annually produced by the Health Effects Institute and the Institute for Health Metrics and Evaluation’s (IHME’s) Global Burden of Disease (GBD) project, PM2.5 pollution killed 17,900 Nepalis in 2019. Similarly, 42,100 deaths in Nepal were attributed to air pollution during the period.

The report has once again come as a reminder that Nepalis continue to breathe toxic air despite several national and international reports showing the deteriorating quality of air in the country and terming air pollution as a major public health issue.

“Nepal’s frequent top ranking in terms of poor quality of air shows that we have not done enough to improve the air quality over the years. Although there have been some actions in the past, we should have been going on war-footing,” Bhushan Tuladhar, an environmentalist who closely follows urban environmental issues, told the Post. “As the whole world, including Nepal, is going through the public health crisis of Covid-19, air pollution has been linked with higher Covid-19 death rates. Air pollution was a major killer even before the pandemic. But we have opted for short-term measures.”

In March, the World Air Quality Report had ranked Nepal as the 8th most polluted country in the world with its PM2.5 annual average 44.46 μg/m3, a drop from 54.15 μg/m3 in 2018, when the country was still placed in eighth position.

The state of air report has highlighted that in 2019, air pollution moved up from the 5th to the 4th leading risk factor for death globally only surpassing high blood pressure, tobacco use, and poor diet as it claimed 6.67 million lives worldwide.

For the first time ever, the report has also measured the harmful impact of particulate matter pollution ambient— PM2.5 and household air pollution—exposures on infants’ health and survival in their first month of life (ages 0 to 27 days).

The report concludes that outdoor and household particulate matter pollution contributed to the deaths of nearly 500,000 infants in their first month of life. According to the report findings, air pollution accounts for 20 percent of newborn deaths worldwide, most related to complications of low birth weight and preterm birth.

The highest annual average exposures were seen in Asia, Africa, and the Middle East, according to the report, which further pointed out that although PM2.5 levels have shown modest improvements in some regions, there has been little or no sustained progress in the most polluted regions.

The report has pointed out that some regions have seen improvements, notably Southeast Asia, East Asia, and Oceania, led by China, Vietnam, and Thailand. However, others — in particular North Africa, the Middle East, and sub-Saharan Africa — have experienced little or no progress or even have seen increases in exposures.

“The disparities in exposure to PM2.5 across these regions have largely remained constant over the past decade, with South Asia consistently seeing the highest exposures,” reads the report. “In large part, these regional trends track closely with socioeconomic development and national policy actions.”

According to Tuladhar, the country has to prioritise long-term actions to deal with the annually deteriorating air quality while short-term measures can be implemented immediately.

“For example, what we have been doing now is managing ventilators which give clean oxygen rather than managing clean air forever. It’s not that we don’t need ventilators, but we need sustainable solutions for clean air,” said Tuladhar.

“We can start by implementing the air pollution action plan, stopping open garbage burning, strictly checking vehicles that pollute and take them off the road. We can implement emission testing just like we have done with the campaign against drunk driving. Such actions don’t demand much resources.”

Every year as the winter sets in, air quality in major cities, including the capital, turns unsafe. This year, however, the harmful impacts of air pollution, coupled with Covid-19, is likely to turn things worse for the public as studies have shown those with heart and lung ailments are at the higher risk of coronavirus infection and death.

“This report comes as the Covid-19 pandemic, a disease for which people with heart and lung disease are particularly at risk of infection and death, has claimed more than 1 million lives, and as India is entering its annual worst air pollution cycle,” Pallavi Pant, an air quality scientist with Health Effects Institute, told the Post in an email.

“Although the full links between air pollution and Covid-19 are not yet known, there is clear evidence linking air pollution and increased heart and lung disease, and there is growing concerned that air pollution exposures, especially in the most polluted regions of South Asia, could exacerbate the effects of Covid-19 significantly.”

The Covid-19 pandemic and months of lockdown, which saw a partial or complete shutdown of vehicular movement around the world, resulted in the improvement of air quality in major cities. With the volume of public movement slowly returning to pre-Covid times, air quality is also likely to deteriorate to pre-pandemic levels.

For Tuladhar, Covid-19 could be a silver lining when it comes to improving air quality.

“The Covid-19 came up with several opportunities. People realised what clean and pure air quality meant. They surely do not want to go back to bad air days in the pre-pandemic situation. Public also realised the value of cycling, free roads and public health,” said Tuladhar.