Every day 16,000 public vehicles are carrying passengers to different destinations from Kathmandu. More than one million people left Kathmandu Valley to their native places to celebrate the Dashain festival in the past one week, according to the Metropolitan Traffic Police Division. 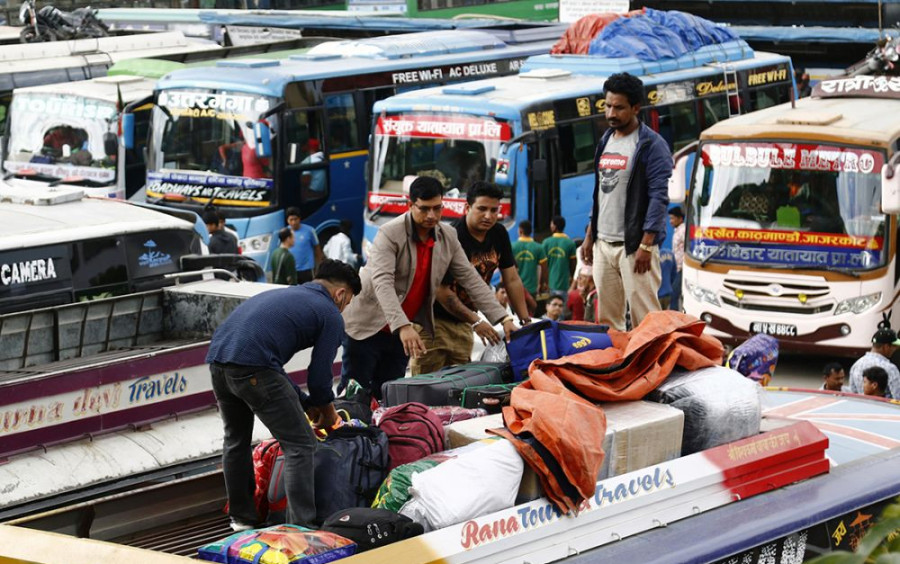 Around 16,000 public vehicles have been leaving the Valley daily, carrying festival passengers to various destinations since Ghatasthapana, the first day of Dashain, according to the division chief, SSP Bhim Prasad Dhakal.

The primary exit points of the Valley— Nagdhunga, Bhaktapur and Pharping— have witnessed increased traffic movement in recent days. According to the division’s data, on regular days, around 7,000 public vehicles leave the Valley from these exit points daily.

“The flow of passengers has steadily gone up since Ghatasthapana (September 29). Every day, over 125,000 people have been leaving the Valley,” Dhakal told the Post.

Over three million people are expected to leave the Valley for this year’s festival.

“We fined them Rs 500 to Rs 1,000 and made them return the ticket amount to the customers. Some vehicle owners were booked under the Public Offence Act,” said Dhakal.

Similarly, traffic police have booked 917 people, nearly 70 percent of them motorcycle riders, for drink driving in the past one week.

“We have adopted a zero-tolerance policy for drink driving to minimise road accidents during the festival,” said Dhakal.

“Overspeeding is one of the main reasons for road accidents. So we have mobilised traffic officers with six laser speed guns and 25 radar guns on different highways to check over-speeding vehicles,” said Dhakal.