Over 1.5 million converge for Gadhimai Mela

BARA: Gadhimai religious festival, known as the Kumbha Mela of the tarai, on Tuesday witnessed over a million visitors, giving security personnel a tough time. According to  police, over 1.5 million people came for the mela  and to sacrifice animals. 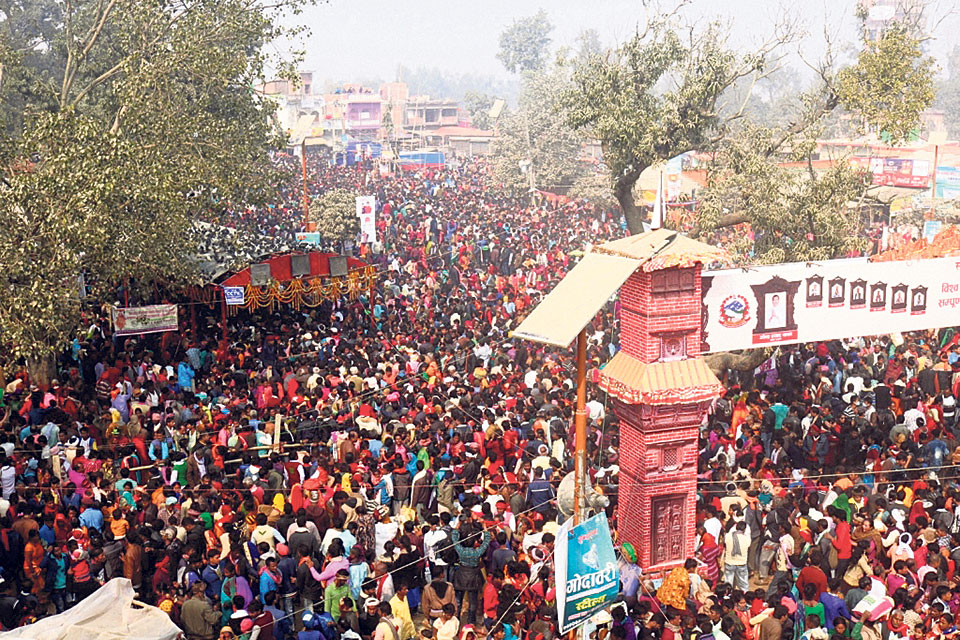 Vehicles were parked jam-pack 15 meters on either side of the way to the main venue, the police said. Due to traffic jams in parts of Kalaiya, Bariyarpur, Chhaudadanav and other areas, worshipers   had to walk a long distance. “The crowd was so huge, there must have been over 1.5 million; the number of vehicles was also larger than expected. So, things turned a little chaotic. People had to walk down to the venue,” said DSP Sanuram Bhattarai of District Police Office, Bara.

The Mela organized every five years is equally popular in the border towns and villages of India. Even though there was controversy the last time over the slaughter of so many animals, the crowd size has not decreased, according to the police. “The crowd is still big,” Bhattarai said.

Tuesday and Wednesday are considered special  in the over week-long mela, which has attracted media  worldwide. “People have come down from Kathmandu, Pokhara and many other places inside the country. There is a massive media presence. Indian nationals also come in huge numbers,” said Bhattarai.

Bibahapanchami, the religious festival in  Janakpur, is another attraction for visitors. Those who come for the mela hardly miss that event.

According to one priest, Shiva Chaudhari,  it is very important to strictly follow the rituals before the animal sacrifice as the devotees have placed all their faith in the priests. He stated that there were around 5,000 buffaloes brought  for sacrifice.