Over 29,000 tourists enter Nepal from Rasuwagadhi in 10 months

RASUWA, Nov 4: Over 29,000 tourists from China and other countries have entered Nepal via Rasuwagadhi customs point in the past 10 months. 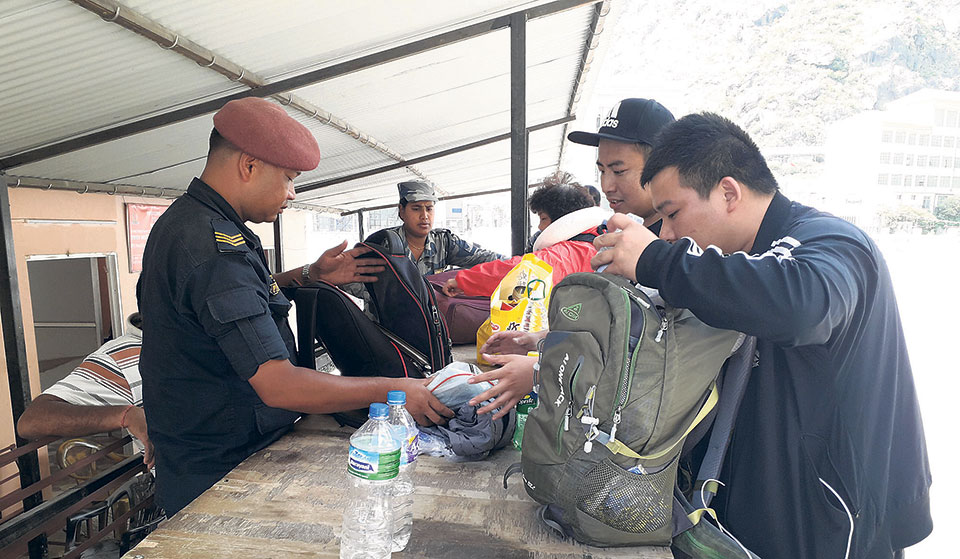 According to the records of Rasuwagadhi Immigration Office, 29,313 tourists entered Nepal via land through the Chinese border from January to October. Records show they went straight to Kathmandu, Pokhara or Lumbini upon entering the country.

Bhandari added that due to poor condition of road in the Nepali side, Chinese tourists entering Nepal via Rasuwagadhi return through Timure. Around 60 to 70% of tourists entering via the customs point are Chinese nationals. Most of the tourists use Nepali vehicles, while some bring their own vehicles from China.

In 2016, China announced the customs point as international border point, after which tourists from third countries starting using it to come to Nepal.

Tourists from China, America, Slovakia, United Kingdom, Netherland, Germany, Italy, France, Czech Republic, and Australia, among others, have entered the country through Rasuwagadhi.

Most of the tourists using this border point get visa from Lhasa and Guangzhou. Around 10% get visa upon arrival at Rasuwagadhi. People from China, SAARC countries except Afghanistan, and children below 10 years from other countries get Gratis Visa.

Rasuwagadhi Immigration Office does not provide visa to 12 countries on arrival. Besides diplomatic and official passport holders, citizens of Nigeria, Ghana, Zimbabwe, Switzerland, Somalia, Liberia, Ethiopia, Iraq, Palestine, Afghanistan and Syria should get visa from the respective Nepali embassy.

Visitors can fill up visa application form online at Immigration Department's website. The form works for only 15 days so one does not need to fill it earlier, according to Bhandari.