A collection of plastic afloat in the Pacific Ocean is growing rapidly, according to a new scientific estimate.

Predictions suggest a build-up of about 80,000 tonnes of plastic in the "Great Pacific Garbage Patch" between California and Hawaii.

This figure is up to sixteen times higher than previously reported, say international researchers.

One trawl in the centre of the patch had the highest concentration of plastic ever recorded.

"Plastic concentration is increasing - I think the situation is getting worse," said Laurent Lebreton of The Ocean Cleanup Foundation in Delft, Netherlands, which led the study.

"This really highlights the urgency to take action in stopping the in-flow of plastic into the ocean and also taking measures to clean up the existing mess."

Waste accumulates in five ocean areas, the largest being the patch located between Hawaii and California.

The researchers used boats and planes to map this area of the North Pacific, where rotating currents and winds cause marine debris, including plastic, seaweed and plankton, to converge.

The three-year mapping effort showed that plastic pollution is "increasing exponentially and at a faster rate than in the surrounding water", said the international team. 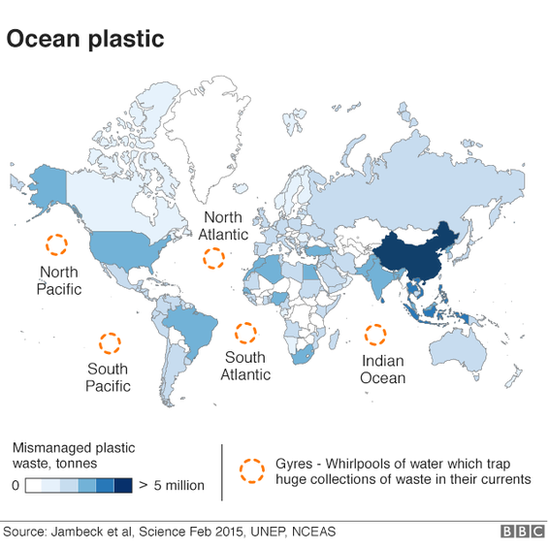 Microplastics accounted for 8% of the total mass of plastic afloat within an area of 1.6 million square km.

Of the estimated 1.8 trillions bits of plastic, some were larger than microplastics, including fishing nets, toys, and even a toilet seat.

Erik van Sebille of Utrecht University in the Netherlands, who is not connected with the study, said the amount of plastic discovered was "staggering".

"While their estimates come with large uncertainty ranges, they do report a staggering amount of plastic," he said.

"And they also discovered that the Garbage Patch is moving around much more than anyone expected." 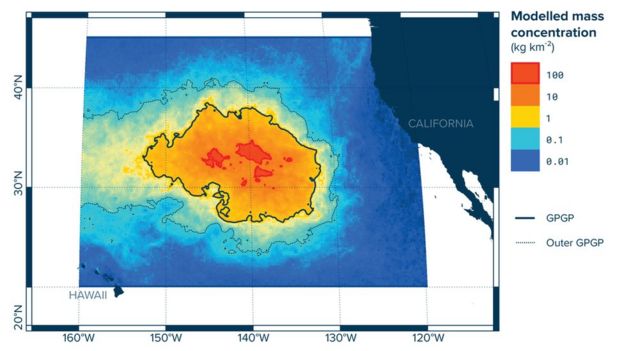 The use of aerial surveys as well as boats could partly explain why the new estimates are higher than in the past.

However, the differences could also be down to increasing levels of plastic pollution in the time since the previous studies were carried out.

Plastic washed out to sea following the 2011 Japan earthquake and tsunami could account for as much as 20% of plastic accumulating in recent years, the research, published in Scientific Reports, suggests.

What the study found

Every year, millions of tonnes of plastic enter the ocean. Some drifts into large systems of circulating ocean currents, known as gyres. Once trapped in a gyre, the plastic will break down into microplastics, which may be ingested by sea life.

The message of the study is clear, said Laurent Lebreton.

"It goes back to how we use plastic," he said.

"We're not going to get away from plastic - in my opinion it's very useful, in medicine, transportation and construction, but I think we must divert the way we use plastic, particularly in terms of single-use plastic and those objects that have a very short service lifespan."