The primary factor for resignations is that many are dissatisfied when they are passed over for promotions due to corruption, nepotism or politicisation.

On February 10, Narendra Upreti, a superintendent at the Teku Metropolitan Police Crime Division, resigned from his post alleging discrimination in promotions. 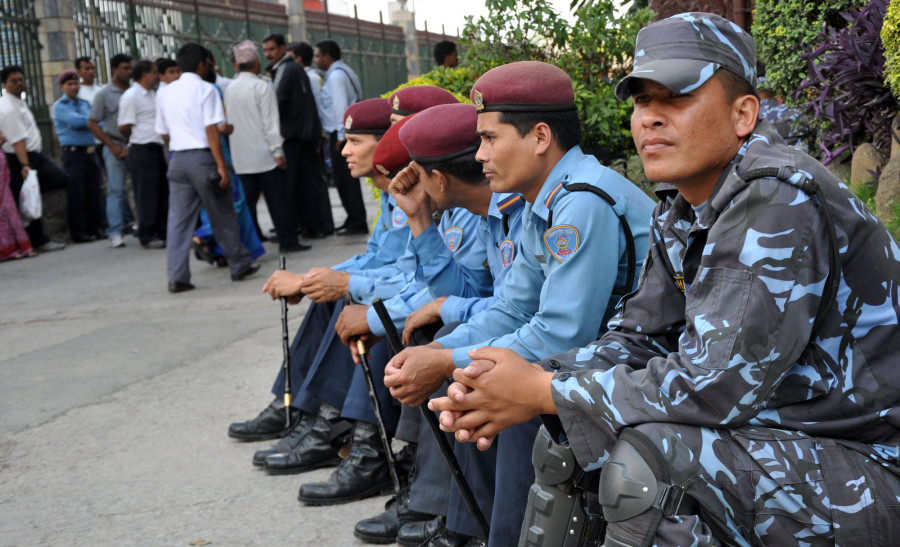 Upreti, who joined the police service in 1995, was in line to be promoted to the post of Senior Superintendent of Police. However, the police headquarters did not enlist him for promotion, even though some of his junior colleagues got the recommendation.

“I left Nepal Police as there was injustice regarding promotions. The promotions did not follow the due process,” said Upreti. “It’s not capacity that decides promotions; the process is completely influenced by money, power, nepotism and politicisation.”

In the past two-and-a-half years, 6,577 police officials have resigned from the over 72,000-strong force, according to records from the Nepal Police. These include high-ranking officers, such as three deputy inspector generals, three superintendents and 10 deputy superintendents. The higher number of resignations came from police constables.

According to the Nepal Police Regulations, the criteria for promotion includes seniority, the number of medals and commendations acquired, and performance evaluation. However, there have been numerous instances in the past where police officials have challenged promotions in courts on various grounds, including nepotism and corruption.

On April 11, 2018, Deputy Inspector General Ramesh Kharel announced his resignation a day after the government appointed Sarbendra Khanal as the new inspector general.

Despite winning over the public with a crackdown on crimes in Kathmandu during his stint as chief of the Kathmandu Metropolitan Police Range in 2014, Kharel resigned from his post due to dissatisfaction with the police force.

Both current and former police officials say that the primary reason for resignations is dissatisfaction over being passed over for promotion, but there are a host of structural and psychological reasons behind the high resignation rate in the national police force.

According to Chhetri, unlike in other countries, police are expected to be on call 24 hours. If anything untoward happens in their areas, then they need to mobilise and appear on the scene. Since there is no shift system, this can lead to working ungodly hours for little pay.

The remuneration provided by the Nepal Police to officials is certainly a major reason behind the resignations. The top cop in the country, the inspector general, draws a salary of Rs64,726 while Senior Superintendents and Superintendents make Rs53,696 and Rs50,705 respectively. The lowest rung recruits make Rs19,480.

“Despite working for over a decade in the police, the salary that I earned was inadequate to raise a family in Kathmandu,” said Dipendra Adhikari, a former inspector with the Central Investigation Bureau, who resigned on July 13, 2018 from his post citing personal reasons. “I was involved in major investigations like the Ranibari murder case and the murder of Justice Rana Bahadur Bam, but my batchmates were promoted before me. I saw no future in the job so I quit.”

Promotions, transfers, and training abroad could serve as motivational factors for police personnel who are making meager salaries but even these aren’t provided to those who deserve them, said Adhikari. This can lead many to feel disillusioned with the police force, especially if they don’t have political and social contacts or the financial means to influence their promotions and transfers.

The number of police personnel resigning is rising every year, alarming the force, where senior officers admit that there are numerous issues with the structure of the organisation that need to be addressed. In the 2017-18 fiscal year, a total of 2,564 police personnel left the job. That number rose to 3,073 in the 2018-19 fiscal year; this year, in the first five months, 940 personnel have already quit. Assistant sub-inspectors, head constables and constables constitute nearly 80 percent of those quitting, according to the data.

“The number of resignations is rising and it’s not just due to dissatisfaction in promotions,” said Inspector General Khanal, chief of the Nepal Police. “Many junior officers do not want to continue working after being eligible for a pension or after taking part in peacekeeping operations.”

Police personnel are eligible for pensions after 16 years but the more lucrative opportunity comes from peacekeeping operations, where police and Nepal Army officials are paid in dollars according to the UN pay scale.

For police personnel stuck in low-level positions, looking for other careers is a better option than waiting for a promotion, which might never come. Many turn to work in the private sector, as security guards or bouncers, as a history in the police force tends to lend them credibility in their new jobs. There are opportunities galore in foreign lands for former security officers.

Khanal, however, believes that small government actions could put a halt to the rising number of resignations.

“If the government is able to make the police job more lucrative by facilitating free education for children, providing incentives for training abroad and increasing the mandatory retirement age, the resignation rate will surely fall,” said Khanal.