While reconstruction did create jobs and increase financial inclusion, its contribution to the growth rate requires more research, economists say.

Public and private spending on post-earthquake reconstruction contributed 4.5 percentage points to the economic growth rate, argues a new study, but not everyone buys it. 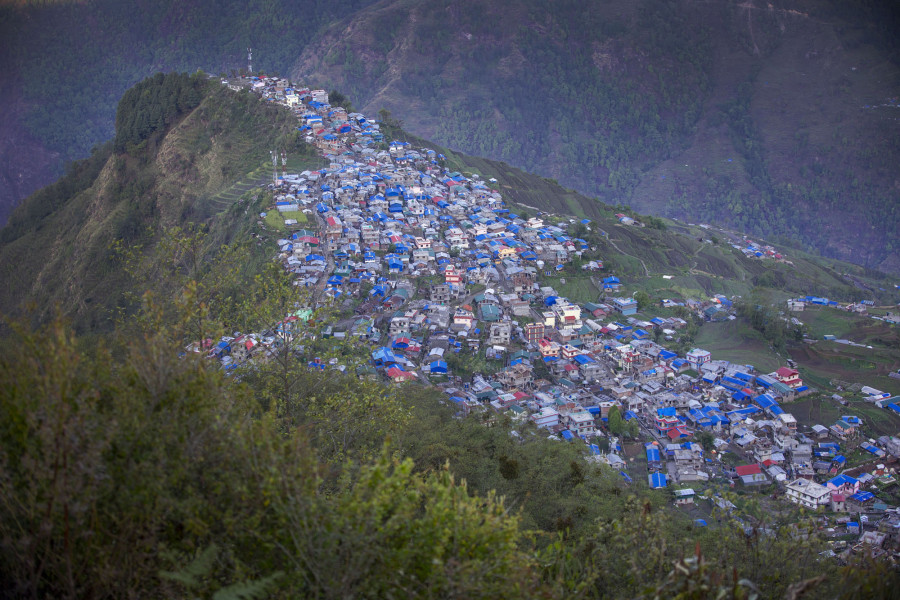 A preliminary report entitled “Impact of Post-Earthquake Reconstruction on Nepalese Economy”, jointly prepared by the National Reconstruction Authority and the Society of Economic Journalists Nepal, says that reconstruction activities in the aftermath of the 2015 earthquakes contributed 4.5 percent to the growth rate each year, generating 1.42 million jobs. The report was supported by the National Democratic Institute for International Affairs and the United States Agency for International Development.

Economist and lead author Nirmal Kumar Raut, while presenting the report on Wednesday, said that around 550,000 people were engaged in reconstruction work this fiscal year alone.

Nepal was struck by two powerful earthquakes of magnitudes 7.8 and 7.3 on April 25 and May 12, respectively, killing 8,790 people and injuring 22,300. The economic loss was estimated at $7 billion, out of which 76 percent was in the private sector.

But since then, a flurry of post-disaster activities has meant that the economy is growing at breakneck speed. The Nepali economy grew by 7.74 percent in the fiscal year 2016-17, the highest growth rate since the fiscal year 1993-94. In 2017-18, the economy grew by 6.3 percent, according to the Central Bureau of Statistics, the main government body that deals with the country's vital statistics.

Raut argues in the report that reconstruction work alone contributed to most of the growth rate.

The study used two different approaches to analyse the effect of post-earthquake reconstruction on economic growth. The first inference was drawn from the contribution of the construction industry to the GDP vis-à-vis other major industries before and after the earthquake.

The second inference was made by exploiting an econometric model, according to Raut. An econometric model is one of the tools economists use to forecast developments in the economy. It measures past relationships among such variables as consumer spending, household income, and employment, among others, and then forecasts how changes in some variables will affect future development.

Some economists, however, have contested the report’s findings.

“An average 4.5 percent growth contribution by the reconstruction drive alone is not possible,” said Govinda Nepal, a former member of the National Planning Commission. “There are no substantial bases to claim that reconstruction activities fuelled a growth of 4.5 percent, even though it has contributed significantly to revitalising the economy.”

Nepal, who also served as chief economic advisor to the Ministry of Finance in 2016, said there was a need to conduct a comprehensive study on how reconstruction activities contributed to the economy before making such a large claim.

In 2015-16, the government was able to spend only Rs21 billion on reconstruction, and the amount spent in 2016-17 was only Rs27 billion. The government spent a total of Rs450 billion in the past four years, with most of the spending taking place in the last two years.

“This gives ample ground to conclude that the 4.5 percent contribution to the economy by the reconstruction drive is just not possible,” said Nepal.

Even Sushil Gyewali, chief executive officer of the National Reconstruction Authority which commissioned the report, said that the employment generated by the reconstruction drive looks realistic, but there is a need for more research to find out the actual contribution of reconstruction activities to the economy.

Gyewali also said that whatever growth there was did not just come from the government’s investment only. While the government invested Rs150 billion in the housing sector, the private sector poured in Rs600 billion to build homes.

“As Nepal’s reconstruction used local materials and resources, most of the money did not go outside the country, and it supported the grassroots level the most,” said Gyewali.

As per the data from the National Reconstruction Authority, an agency formed to coordinate reconstruction efforts, as many as 482,323 beneficiaries, out of the total 816,560, have rebuilt their houses. As many as 56,382 beneficiaries have received construction completion certificates.

The reconstruction of 5,063 public schools, 25,128 school rooms, 665 health institutes, 380 archaeological sites, 311 government buildings and 165 buildings of security agencies has also been over, according to the authority.